WARSAW, Poland — A new documentary revealing cases of sexual abuse by priests has deeply shaken Poland, one of Europe’s most Roman Catholic societies, eliciting an apology from the church hierarchy and prompting one cleric to leave priestly life. 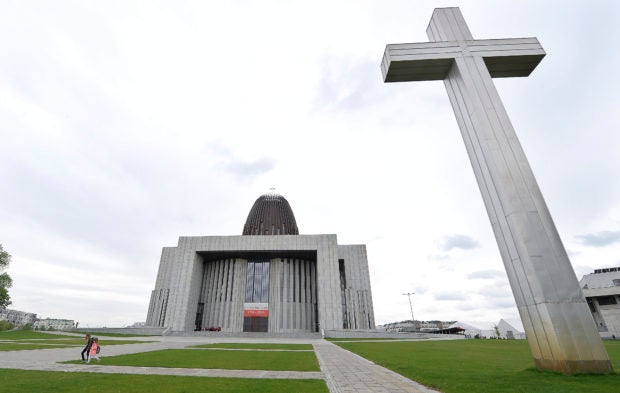 People walk by the Temple of Divine Providence, a major church in the Polish capital,in Warsaw, Poland, Monday, May 13, 2019. A new documentary about pedophile priests has deeply shaken Poland, one of Europe’s most Roman Catholic societies, eliciting an apology from the church hierarchy and prompting one priest to leave the clergy. Image: AP/Czarek Sokolowski

“Tell No One”, a film financed through a crowdfunding campaign, was released on YouTube on Saturday. By Monday, the documentary had more than 8 million views.

It triggered soul searching in a country where there is no higher authority than the Catholic Church and its clergy.

“Why do priests commit such crimes? Why did the bishops not react as they should? Why, for years, did a conspiracy of silence prevail among the clergy?” journalist Andrzej Gajcy asked Monday on the news site Onet, voicing some of the uncomfortable questions confronting many Poles.

The archbishop of Poland has thanked the brothers who made the film, Tomasz and Marek Sekielski, for their “courage.”

“I apologize for every wound inflicted by the people of the church,” Archbishop Wojciech Polak said Saturday.

The Vatican’s ambassador to Poland, Archbishop Salvatore Pennacchio, also expressed sympathy for abuse survivors on behalf of both himself and Pope Francis.

“The pope is very concerned and we express sympathy and solidarity,” Pennacchio said.

Among others in the Polish church, the reactions were mixed. The archbishop of Gdansk, Leszek Slawoj Glodz, said he has better things to do than watch the film.

The Rev. Jacek Prusak, a Jesuit priest, called the church “a home for a herd of wolves in clerical collars” that would face judgment.

Most Poles identify as Catholic and have a powerful attachment to the church. They credit the Catholic Church with keeping their country’s language and culture alive during more than a century of foreign rule.

The late Polish Pope John Paul II, who was made a saint, is revered both as a moral authority and for his opposition to communism.

But like many other countries, Poland has had to reckon recently with revelations about clergy who molested children. In March, Polish church authorities said they had recorded cases of 382 clergymen who abused 625 victims under the age of 18 since 1990.

The documentary presents new evidence that priests who were known to be pedophiles were transferred between parishes instead of pushed out of the church or referred to police.

One is the late Rev. Franciszek Cybula, who in 1980 to 1985 was the priest of a shipyard technician named Lech Walesa who founded Poland’s anti-communist Solidarity movement and became president after communism fell.

“I am so surprised that I do not know what to say,” Walesa said. “If I, as a Catholic, had known, would I allow such a thing? No way.”

The film opens with a 39-year-old woman, Anna Misiewicz, returning to a parish in Topola, a village near Krakow, to confront an elderly priest who molested her when she was about 7 years old.

He expresses remorse and blames the devil.

The film also alleges that the Rev. Dariusz Olejniczak, a priest who was sentenced for molesting 7-year-old girls, was allowed to continue working with young people. On Sunday, he announced he was seeking to be removed as a member of the clergy.

Another victim, Marek Mielewczyk, describes being 13 when he was first raped by a priest. The perpetrator ordered him “not to tell anybody what happened,” not even during confession — the message captured in the film’s title.

Politicians also have reacted to the film, promising to take a tougher approach to stopping child sex abuse.

The prosecutor general said Monday he was ordering an investigation of the crimes depicted in the film.

The Kielce curia, which oversees Topola, issued a statement detailing steps it took in the case of Father Jan A. since Jan. 7, when it was notified of wrongdoing. It said collected evidence was sent to the Vatican. RGA/JB

Priests should live a life of peace and sacrifices