Abby wins reelection bid over brother Junjun but their father is defeated by a former ally-turned-rival
By: Dexter Cabalza - Reporter / @dexcabalzaINQ
Philippine Daily Inquirer / 05:23 AM May 15, 2019 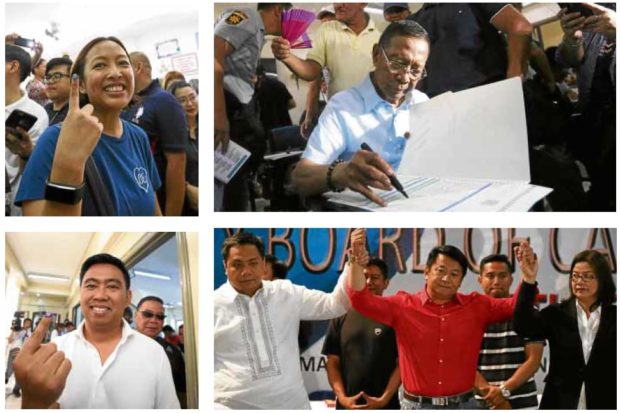 MANILA, Philippines — Not one, but two members of the Binay family, which has been in power in Makati City for decades, lost in their own bailiwick.

One was defeated by another Binay who was his sister; the other by a former ally-turned-foe.

True to her words, incumbent Mayor Abby Binay had the last laugh when she beat her younger sibling, Junjun Binay, in the race for the financial capital’s highest seat of power.

Abby’s husband, Rep. Luis Campos, was reelected in the city’s second district with 90,736 votes, boxing out his closest rival, incumbent Councilor King Yabut, who got 63,245 votes.

Twelve of the councilors-elect also came from her Team Performance while the remaining four were from Junjun’s Team Be Nice.

As a result, there will be a shift in power in the city council come June 30 with Abby now supported by the majority. In October, 13 of the 18 councilors defected from her side and expressed their support for Junjun’s candidacy, leading to a proxy war which stalled the approval of the 2019 city budget.

Abby and her husband, however, did not show up for their proclamation as winners at the Makati Coliseum on Tuesday.

People surmised it was out of courtesy for her father, former Vice President Jejomar Binay, who lost in his congressional bid in the first district against Romulo “Kid” Peña, a former ally.

Yet the Binay patriarch had all the odds in his favor: the backing of his warring children, the blessing of the bloc-voting Iglesia Ni Cristo and his long history of service in the city.

Peña, however, was unperturbed by his victory, saying: “I expected to win. I was even expecting to win by a bigger margin.”

As Peña was about to be called on stage by the local Commission on Elections (Comelec) sitting as the city board of canvassers, Jose Julius Castro, the legal counsel of Jejomar Binay’s United Nationalist Alliance (UNA) party, moved for the deferment of his proclamation.

He also alleged that the simultaneous power interruptions in four polling places in the city’s first district on Monday night could be a prelude to election fraud and alluded to the “orchestrated plan” to disenfranchise his client’s supporters who were arrested for alleged vote-buying.

Election officer Jayvee Villagracia, however, dismissed UNA’s verbal motion, noting that only issues involving the composition of the board of canvassers and the conduct of proceedings could be heard at this time.

He asked Jejomar Binay’s camp to file a formal pleading in the Comelec before proceeding to officially proclaim Peña’s victory.

Peña had worked with the Binays before as president of the Liga ng mga Barangay when he was Barangay Valenzuela chair from 2005 to 2010.

Under the Nacionalista Party, he ran for vice mayor in 2010 but lost.

Switching to the Liberal Party in 2013, he made another bid for the post and won, preventing a sweep by the UNA party then led by Junjun. He got around 6,000 votes more than Marge de Veyra, Junjun’s running mate.

In March 2015, Peña was appointed acting Makati mayor after Junjun was suspended and eventually dismissed by the Office of the Ombudsman for graft charges. He ran for mayor in 2016 but lost to Abby.