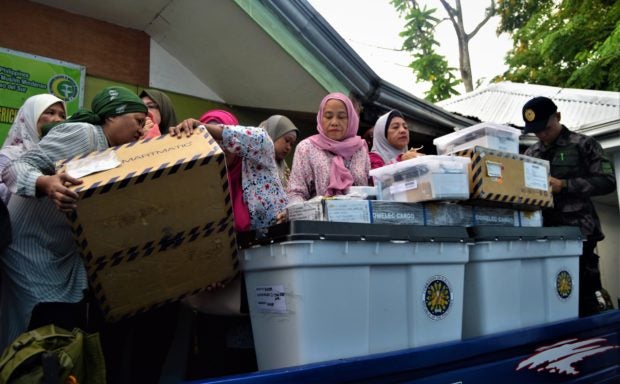 MANILA, Philippines — Three hours before polling places closed amid reports that the number of malfunctioning vote counting machines (VCMs) had tripled compared to that in the 2016 elections, the Commission on Elections (Comelec) on Monday said the elections were “generally successful” although “a little problematic.”

“In general, because we’re seeing that a lot precincts open, and we are getting a lot of reports that people were able to cast their votes successfully, we think it is generally successful,” said Comelec education and information director James Jimenez at a briefing at the Philippine International Convention Center in Pasay City.

But he noted that problems, which had cropped up, were being addressed.

Proof of the pudding

Jimenez said the success of the elections would be determined by the fast transmission and canvassing of results and the proclamation of the winners.

“For our part, we have been resolving the problems, the problems have been addressed, and the proof of the pudding is really the election results, which are still a few hours away,” he said.

The Comelec official initially said the “primary cause” of the delays in voting was about 1,000 faulty SD cards of counting machines.

The defective SD cards have been replaced, he said.

Jimenez later acknowledged that 400 to 600 out of 85,000 VCMs had “experienced issues” but he pointed out that these were, “in the overall scheme of things, a small number” and that 9,000 VCMs were available as substitutes.

Responding to a question on whether the malfunctioning VCMs were tampered with or were just old, he said what really happened to the machines would not be known until these were inspected after the polls.

On the possibility that the VCM glitches might affect the credibility of the elections, he replied, “I’m sure that’s what some people would say.”

Jimenez noted that the Comelec did not say that the elections would be perfect.

“We’ve also said that with so many machines in use, it is inevitable that some of them will experience malfunctions,” he said.

Jimenez also admitted that a few precincts were not able to open on time but he could not give exact figures as of press time.

For its part, the Philippine National Police noted that there were no major untoward incidents that disrupted the midterm polls as of noon on Monday.

The PNP said only “administrative delays” marred the elections.

At a press briefing, Police Gen. Oscar Albayalde, the PNP chief, said six out of 36,831 voting centers nationwide — based in Lanao del Norte — were rendered either “nonoperational” or opened late time due to “defective [VCMs] and SD cards, and an absence of election boards who were replaced by PNP personnel.”

As of noon, a total of 1,501 PNP personnel had replaced absent teachers as election board inspectors in the Bangsamoro Autonomous Region in Muslim Mindanao, Northern Mindanao, Bicol region, Calabarzon (Cavite, Laguna, Batangas, Rizal and Quezon) and Marikina, Albayalde said.

Albayalde described the conduct of the elections as “relatively peaceful,” even as he noted a shooting incident outside a polling place in Panglima Estino, Sulu province, that resulted in the wounding of five civilians. Two cars were torched.

The PNP chief said the incident had been placed under control.

Albayalde noted three explosions in Mindanao on the eve of the elections and on Monday morning—one at a vacant lot at Purok Omar, Cotabato City; and two at Poblacion Dalican, Datu Odin Sinsuat, Maguindanao.

He said these happened away from polling centers, had no connection with the polls and were likely perpetrated by groups wanting infamy.

Election-related violent incidents over the election period starting Jan. 13 until Monday remained at 43, with 20 killed and 24 injured nationwide.

The PNP attributed the reduction in violence to security preparations, such as the arrest of around 5,500 persons for violation of the nationwide gun ban that resulted in the seizure of 4,618 firearms and 44,226 other deadly weapons.

A two-day liquor ban starting midnight on Sunday led to the arrest of violators.