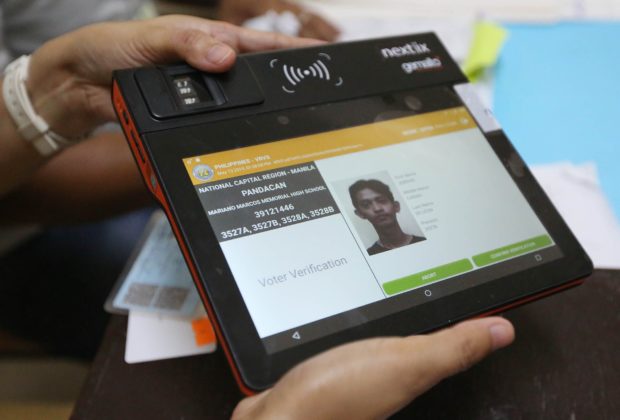 MANILA, Philippines — Malfunctioning voters’ registration verification machines (VRVMs) and vote counting machines (VCMs) marred the elections on Monday, creating long lines of voters in many areas and raising doubts about the integrity of the midterm polls.

The malfunctioning VRVMs may lead to the disenfranchisement of voters who may just opt not to cast their vote, said election watchdog group Kontra Daya.

A VRVM scans a voter’s fingerprints to determine if he or she is listed in a particular voting precinct.

Some 500,000 voters — a number big enough to possibly alter the outcome of a tightly contested election — may have been disenfranchised by the defective VCMs, according to the opposition Otso Diretso ticket.

She pointed out that the defective VCMs would be “useless” in committing electoral fraud.

Inspectors in affected polling places had to manually verify voters’ registration from a list because of glitches in the VRVMs.

At Celedonio Salvador Elementary School in Paco, Manila, teachers D’Sapphire Sitja and Judy Jucla struggled to get the mint-new VRVM working for 45 minutes while the voters started to snake in line outside.

But the machines “were not recognizing the registered voters’ names,” Jucla said, forcing the teachers to manually check the voters’ registration the entire day.

Two hours later, all 11 VRVMs being used in Celedonio were no longer functioning. “It was a shame because this was supposed to be new,” Sitja said.

The Alliance of Concerned Teachers national headquarters, which conducted an independent audit of election-related issues, said the glitches could raise questions about the credibility of the election results.

Balloting in many parts of Pangasinan province got to a slow start after most VRVMs in polling places malfunctioned.

An SD card is used to store the encrypted image of the ballots fed into the counting machines.

There were also reports of malfunctioning VCMs in many parts of the country.

In Makati City, it took ten attempts and more than two hours of waiting for former Vice President Jejomar Binay to cast his vote because the VCM in his precinct rejected his ballot.

“I will be deprived of my right to vote because a machine says so? That shouldn’t be the case … I am now doubting the [integrity of this election],” said Binay, a candidate for Makati representative.

He went straight to the Philippine International Convention Center in Pasay City, where the Commission on Elections (Comelec) convened on Monday. 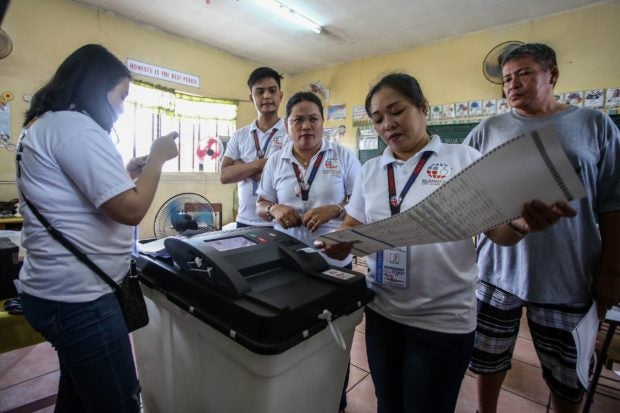 REJECTED BALLOT Local election staff smooth out a ballot after it was rejected by the vote counting machine inside a polling precinct at Santa Lucia Elementary School in San Juan. INQUIRER PHOTO/ JAM STA ROSA

A new VCM was installed in Binay’s clustered poll precinct past 9 a.m.

Binay was given another ballot around 10:15 a.m, after the new VCM rejected his first ballot.

Among those whose precinct VCMs in San Juan City suffered glitches was Sen. Grace Poe.

Sen. Aquilino Pimentel III, whose voting in Cagayan de Oro went without a hitch, noted that there were too many reports of malfunctioning VCMs.

The Comelec should explain why this came about despite it testing the machines before the country went to the polls, Pimentel said.

He received reports of 16 of 50 barangays in Dapitan City having broken machines and SD cards, he said.

Among the VCM errors that Kontra Daya recorded were machines shutting down, stopping or refusing to start, ballots getting stuck and discrepancies in the generated receipts.

Not cause for concern

The Parish Pastoral Council for Responsible Voting (PPCRV) said the number of VCMs that malfunctioned was minimal and was not a cause for concern.

Maribel Buenaobra, PPCRV executive director, told reporters that “less than a percent” of the total numbers of VCMs had malfunctioned.

“In the overall scheme of things, that is a small number … But compared to 2016 [elections when there were only 188 VCMs with problems out of a total of 92,000], the figure is jarring,” said Comelec spokesperson James Jimenez.

At Ilagan City in Isabela province, hundreds of VCMs bogged down.

At City of San Fernando in Pampanga province, a VCM needed beating at a poll center while a counting machine in another precinct had to be kicked or slapped to avoid accomplished ballots from getting jammed.

In Albay province, 50 VCMs as of 4 p.m. had malfunctioned, causing confusion and doubt about the integrity of the elections.

In Daraga town, Joy Magos, 31, was asked to shade the ballots and was told that her ballots would be encoded later.

“This seems like a disenfranchisement of right to suffrage of voters because they are not sure if their votes were counted and they do not see the receipts,” said Carlo Obrero, a division election supervising officer.

“We are afraid that real votes will not be cast accordingly,” said Fr. Rex Paul Arjona, PPCRV chair in Albay.

In Camarines Sur, 20 of the 1,753 VCMs were reported to have malfunctioned.

In Masbate province, almost all 20 towns and Masbate City also had VCMs malfunctioning.

VCMs were also reported to have malfunctioned in Cavite, Batangas, Marinduque and Oriental Mindoro provinces, as well as in Iloilo province and in Cebu City.