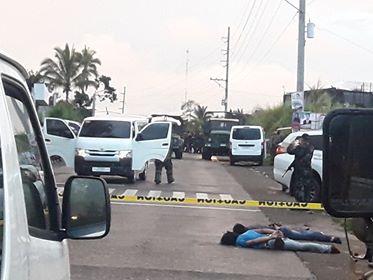 Soldiers hold two men – the driver of the van and another person caught taking a video of a bombing attempt in front of a voting center – in Marantao, Lanao del Sur  on May 13, 2019. PHOTO by Divina Suson/ Inquirer Mindanao

MARANTAO, Lanao del Sur — A man who tossed an improvised explosive device in front of the Bacung Elementary School here aimed at soldiers guarding the voting center was injured when the bomb exploded in his van instead.

Colonel Jake Jumawan, commander of the Army’s 82nd Infantry Battalion securing the area, said the suspect was on board a white van when he threw the improvised bomb at soldiers securing the school. But the bomb hit the van’s windshield, bounced off, and exploded inside the van.

The suspect, whose identity is still being withheld by authorities, was brought to the Amai Pakpak Medical Center in Marawi City for treatment. The place is about 19 kilometers from Marantao.

Jumawan said the driver of the van was arrested. Another person who was seen near the blast site taking a video was also nabbed for questioning, he added.

Three more IEDs were recovered inside the van and were detonated by the Army’s explosive ordnance disposal (EOD) unit, according to Jumawan.

The initial investigation by the police showed that the foiled bombing was meant to sow terror and disrupt the election in the area. (Editor: Eden Estopace)