NAGA CITY – Vice President and opposition leader Leni Robredo on Monday admitted feeling anxious with the outcome of the midterm elections, where she is supporting eight senatorial candidates under the opposition coalition Otso Diretso.

She, however, said she is hopeful that the people would still unite and support the opposition.

“I feel nervous today because there is much at stake. I am nervous not for the individual candidates we are supporting but for the nation. We
really hope for the best,” Robredo said. 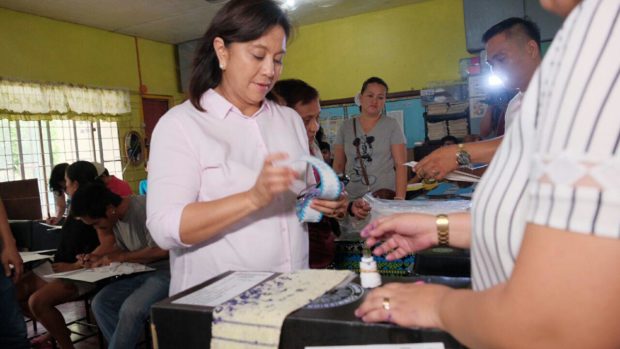 PHOTO from the Office of the Vice President

“Mas kinakabahan kami ngayon kaysa nung 2016 elections, may mga gabi na hindi kami makatulog (We are more nervous now than during the 2016 elections. There are nights that I could not sleep),” Robredo added.

Robredo, her daughters Aika and Trisha cast their votes at Tabuco Central School.

She added that she believes that the opposition had already won “in uniting a lot of people with the same beliefs about things happening
in our midst.”

“Yung sa akin lang, hindi natatapos yung laban sa eleksyon na ito (For me, the fight doesn’t end in this election),” she said.
“Maybe this would be easier if more (of our candidates) would be voted into the Senate. But for me, whatever the outcome of the elections, the
fight continues,” Robredo said.

Robredo bared that she voted for eight senatorial candidates.