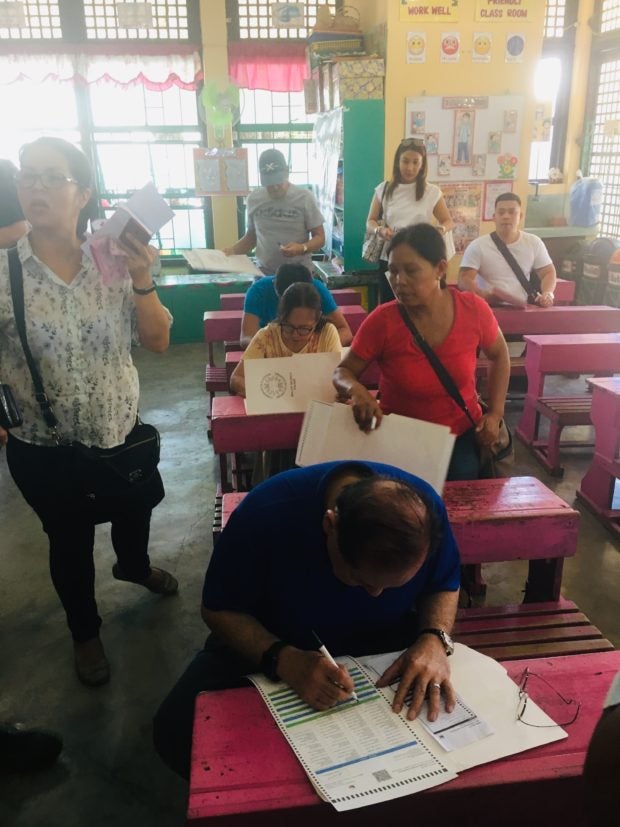 LUBAO, PAMPANGA — Former President and incumbent Speaker Gloria Macapagal-Arroyo arrived in a black Hyundai H350 luxury van together with her husband Jose Miguel “Mike”Arroyo and a grandson around 10:30 a.m.

She was joined by daughter-in-law Angela and eldest son Juan Miguel “Mikey” Arroyo, who is seeking a new term in Congress as Pampanga second district representative.

There was no queue in Precinct 001A so Arroyo approached a teacher doing poll duties to ask for an official ballot.

It took her six minutes to mark the ballot and enter it into the vote counting machine and get her finger marked with indelible ink.

In an interview ahead of the voting, she said as president, “I think what I accomplished was the financial and fiscal stability of our country that set the stage for bringing down the poverty rate from 39 percent to 26 percent.”

Her term, she said, was marked by “unprecedented infrastructure.’

“As to my plans, I will resume writing my memoirs. Aside from that, I have not given much thought to what else I would do to stay involved,” Arroyo told the Inquirer.

Arroyo said she would help the Pampanga provincial government by being a consultant.