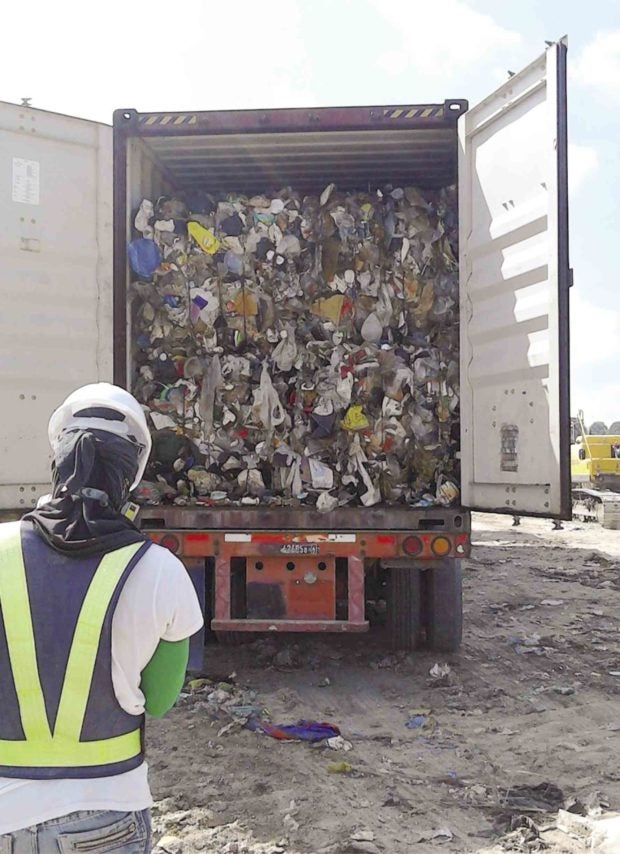 BACK TO SENDER The Philippine government expects that the remaining containers of trash from Canada will be returned to that country this month. —PHOTO COURTESY OF MCWM

CITY OF SAN FERNANDO, Pampanga, Philippines — Environmental group EcoWaste Coalition has again written Prime Minister Justin Trudeau, this time to expedite the release of permits so that the Philippine government can return the illegally shipped Canadian garbage on or before May 15.

Finance Secretary Carlos Dominguez III gave the Bureau of Customs (BOC) until May 15 to ship back the trash after President Rodrig Duterte threatened war on Canada over the environment issue.

“While our government is ready with the necessary documentary requirements to facilitate the reexport as confirmed by our BOC, there is concern that the Canadian side might not meet the May 15 goal for the reshipment of waste to the port of Vancouver,” Aileen Lucero, EcoWaste national coordinator, said in the letter dated May 8.

Lucero appealed to Trudeau to prioritize the processing of the required documents such as the import permit so they can comply with the Philippine government’s May 15 deadline for the reshipment of the garbage.

In a report posted on its website on May 7, the Department of Finance said “bureaucratic red tape in the Canadian government has slowed down the process of reexporting the trash back to Canada.”

The Ontario-based Chronic Inc. exported 103 container vans of trash declared as plastics to Chronic Plastics based in Valenzuela City and to Live Green Enterprise in 2013 and 2014.

The BOC said 34 containers had been locally disposed of but the Metro Clark Waste Management Corp. (MCWM) said only 26 containers were emptied in its landfill at Barangay Kalangitan in Capas town, Tarlac, in July 2015.

Eight more containers were taken to Kalangitan but MCWM rejected these and could not recall who took these back.

The BOC did not give information on these eight containers. It could only account for 69 containers, 67 of which were held inside the Subic Bay International Terminal Corp. Two others were impounded at the Manila International Container Terminal.

Mr. Duterte issued what sounded like an ultimatum to Canada when he said on April 23 that he would “accompany the ship that would bring back the trash to Canada.”

Lucero thanked the Canadian government for “heeding the demand of our own government and people to finally resolve the illegal waste traffic of 103 containers that has soured relations between our countries.”

She added: “The removal of your waste in our land will put this long-standing dumping controversy to a close, and open up a new chapter in our nations’ bilateral relations.”

EcoWaste also pressed the BOC to tell what happened to the eight containers. “The authorities need to tell the public when, where and how the waste were disposed of and who paid for its disposal. We, the people, have the right to know,” Lucero said.