North and South Korean musicians perform together in China 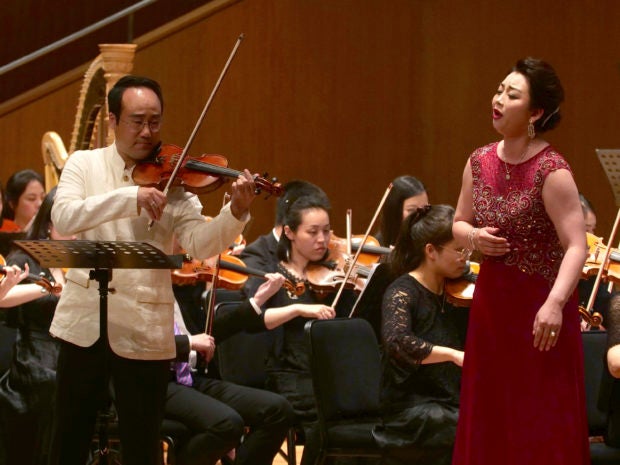 SHANGHAI — A South Korean violinist and a North Korean singer on Sunday, May 12, held a rare joint performance they hope would help bring the divided Koreas closer together via music — especially at a time of emerging tensions amid deadlocked nuclear diplomacy.

For both, it was their first concert with a musician from the other side of the Korean border, the world’s most heavily fortified. They met several times last year in Beijing and agreed on a joint performance to help promote peace on the Korean Peninsula.

As a duet, Kim sang Antonin Dvorak’s “Songs My Mother Taught Me” while Won played the violin. Kim later sang “Arirang”, a Korean traditional folk tune beloved in both countries, while the Shanghai City Symphony Orchestra played the music.

“When I met her [Kim] for the first time, I felt like I was reuniting with an old friend [who has] been on the same wavelength with me,” Won said before Sunday’s concert. “This performance [should not be] be the end … and [what is] important now is what other dreams we can have together.”

In a pre-concert written interview, Kim also said she “heartily wishes” that her songs would help bring back reconciliation mood. “I’m nervous and anxious about what inspiration the audience would have and what reaction North and South Korean compatriots would show to our joint performance,” she said.

North and South Korean musicians performing together is extremely rare as their governments do not even allow their citizens to exchange phone calls, letter and emails without special approvals. Last year saw an unusual wave of cross-border exchanges after North Korean leader Kim Jong Un abruptly entered talks on the fate of his advancing nuclear arsenal. A group of North Korean dancers and singers performed in South Korea during the Pyeongchang Winter Olympics, before South Korean K-pop stars flew to Pyongyang and sang in the presence of Kim and his young wife Ri Sol Ju. Both events were the first of their kind in more than 10 years.

But such exchange programs are now becoming a rarity again as North Korea is resuming provocative weapons tests in an apparent protest against the lack of progress in nuclear negotiations with the United States. Kim returned home empty-handed from his second summit with President Donald Trump in Vietnam in February after Trump rebuffed his calls for major sanctions relief in return for his promise to conduct partial disarmament measures. No publicly known high-level meetings between Pyongyang and Washington have since been reported.

Sunday’s concert [will not] likely work as a breakthrough in the stalled nuclear diplomacy. But it could still “establish an environment” that could make it easier to improve ties between the Koreas, said analyst Cho Han Bum at Seoul’s Korea Institute for National Unification.

Inspired by the West-Eastern Divan Orchestra founded in 1999 to bring together Arab and Israeli musicians together to promote mutual understanding, Won, 42, has been pushing for the establishment of an inter-Korean orchestra for nearly a decade. He has contacted both governments on numerous occasions and sometimes partnered with renowned foreign maestros such as Charles Dutoit and Christoph Poppen.

But his push for a Korean orchestra performance has never been realized and was often scrapped at the last minute due to the delicate nature of ties between the Koreas, which are still technically at war because an armistice that ended in 1950 to 1953 has yet to be replaced with a peace treaty. Incidents that helped spike his past plans included the 2015 mine blasts that maimed two South Korean soldiers, and the 2011 tensions touched off by annual South Korean-U.S. military drills that North Koreas sees as an invasion rehearsal.

Sunday’s performance appeared less difficult to achieve as it involves just one person from each Korea, not dozens of musicians required for an orchestra, and it is happening in China, a third country and the North’s major ally but also the South’s biggest trading partner.

Jointly performing with the two Koreans is the Shanghai City Symphony Orchestra, the first and biggest amateur symphony orchestra in China. The orchestra earlier invited Won and Kim to its annual charity concert, “Love In The City, Pyongyang Shanghai Seoul”, before it and Won’s Lindenbaum Festival Orchestra decided to co-organize the event, according to Won.

In a response to questions by The Associated Press last week, South Korea’s Unification Ministry said that it approved Won’s contact with Kim as part of efforts to support diverse kinds of civilian exchanges between the rivals. The South Korean government is led by President Moon Jae-in, a liberal who espouses greater rapprochement with North Korea and has shuttled between Pyongyang and Washington ahead of two summits between Kim Jong Un and President Donald Trump.

Kim, 33, a graduate of Pyongyang’s prestigious Kim Won Gyun University of Music, is the North Korean representative in China of the Korean Association for Art Exchange. She has been living in China since 2010. Known for her classical crossover singing technique, she has also released several music albums with North Korean and well-known pieces of classical music. South Korea media reported she is the first North Korean sent abroad as a singer.

Won said when he first met Kim last spring, he felt it was easier for him to communicate with her and explain his dream than when he dealt with North Korean diplomats.

“When I talked about music with [North Korean] diplomats, I had to explain why we need music and why music is good … But I [did not] need to do that when I met Kim, and we could just get to the point,” Won said.

Kim said Won’s works have led her to think again about her “love” of the Korean people and that she is willing to contribute to any efforts to foster inter-Korean cooperation.

Won said he will work together with Kim Song Mi to realize similar joint performances on bigger world stages. But he also understands how difficult it has been for him to have a concert like Sunday’s.

“If we can do music together, that means we can understand each other,” Won said. “People are talking about unification, an inter-Korean railway, a peace treaty and the end-of-war declaration. But can we really do those while failing to do an easy thing like doing music together?” CE

Read Next
Comelec, cops intensify security in Abra ahead of May 13 polls
EDITORS' PICK
PH COVID-19 cases near 19K mark, as recoveries breach 4,000
Cherry Mobile teams up with Cloud Panda PH, launches online store
Año vows intensified anti-drug campaign as lockdown eases
South Korea clamps down again as virus rebounds
Senate probe on status of PH internet connectivity amid ‘skyrocketing’ demand pushed
Leveling up your ‘lutong bahay’ with the kitchen companion you never knew you needed
MOST READ
Calida ‘just the lawyer, not the client’ and must ‘never lose his cool’ – Macalintal
7 members of nurse’s family in Laguna catch COVID-19
PH COVID-19 cases near 19K mark, as recoveries breach 4,000
Amid protests, Trump talks of war — and reelection
Don't miss out on the latest news and information.