Man arrested for ‘I eat ass’ sticker, fights for ‘freedom of speech’ 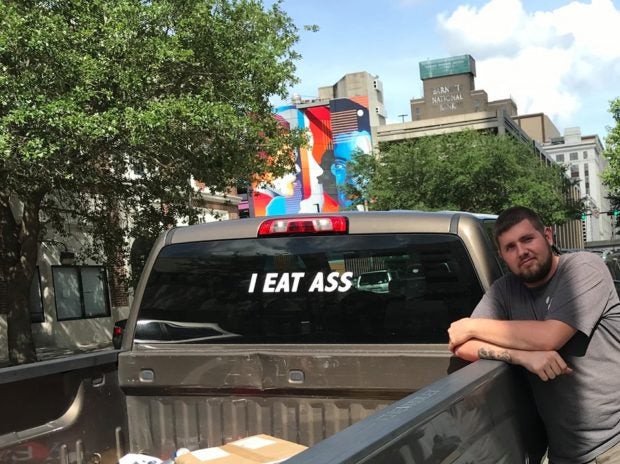 A man in Florida, United States was recently arrested for putting an “I eat ass” sticker on his car. After fighting for his freedom of speech, the officials dropped the charges and might now be facing a lawsuit.

Dillon Shane Webb, 23, was pulled over by the police when they noticed the sticker on his car in Lake City on May 5, as per Lake City Reporter. The arrest can be seen in a dashcam footage from the sheriff’s office, uploaded by YouTube channel HonorYourOath Civil Rights Investigations on May 10.

In the video, the deputy explained that Webb’s sticker was “‘derogatory,” saying, “Some 10-year-old little kid sitting in the passenger seat of his momma’s vehicle looks over and sees ‘I eat ass’ and asks his mom what it means; how is she going to explain that?”

Webb then answered, “That is the parent’s job, not my job.”

The police still proceeded to give Webb a ticket and asked him to appear in court. When he was also asked to remove one letter off of the word “ass,” Webb refused, citing the First Amendment, which is the constitutional freedom of speech. The police then detained Webb and brought him to the police car.

Assistant State Attorney John Foster Durrett, however, sent a letter to the sheriff’s office on May 9, saying that the charges have been dropped and Webb’s sticker is indeed covered by freedom of speech.

Webb’s attorney, Andrew Bonderud, said that they are now planning to press charges against the sheriff’s office. According to Buzzfeed News on May 10, he explained that Webb put the sticker on his car because he and his friends found it funny.

“The bottom line is that he and his friends thought it would be funny and he [should not] end up in jail for making a joke like that,” Bonderud was quoted as saying.

Webb had since been suspended from his work and had to pay to get out of jail, according to The Bonderud Law Firm, P.A. on Facebook last May 9.

We’ve been retained by Dillon Webb. The Columbia County Sheriff’s Office arrested him after he refused to remove the…

Bonderud added, “I think it was brave of him to refuse to take down what he thought was protected speech. I think it showed courage on his part.” Casey Eridio/JB

Read Next
Duterte on Mother’s Day: I wish moms around the world a ‘happy, contented life’
EDITORS' PICK
Smart offers wireless fiber-like speeds to Filipino homes with country’s first 5G Prepaid Home WiFi
House OKs bill allowing married women to retain maiden surname
Pandemic prognosis: Where does it go from here?
This new condo in the South will make you want to turn a new leaf
Legarda: Ending Violence Against Women, a cause for all
Google won’t accept election ads for 2022 national polls
MOST READ
Bongbong Marcos to face another disqualification case
Tropical storm intensifies as it approaches PAR
Christine Bersola, Julius Babao cleared of cancer after colonoscopy, endoscopy
Danish concert-goer confirmed infected with Omicron variant
Don't miss out on the latest news and information.