Supermajority seen — but not that smooth for Duterte agenda 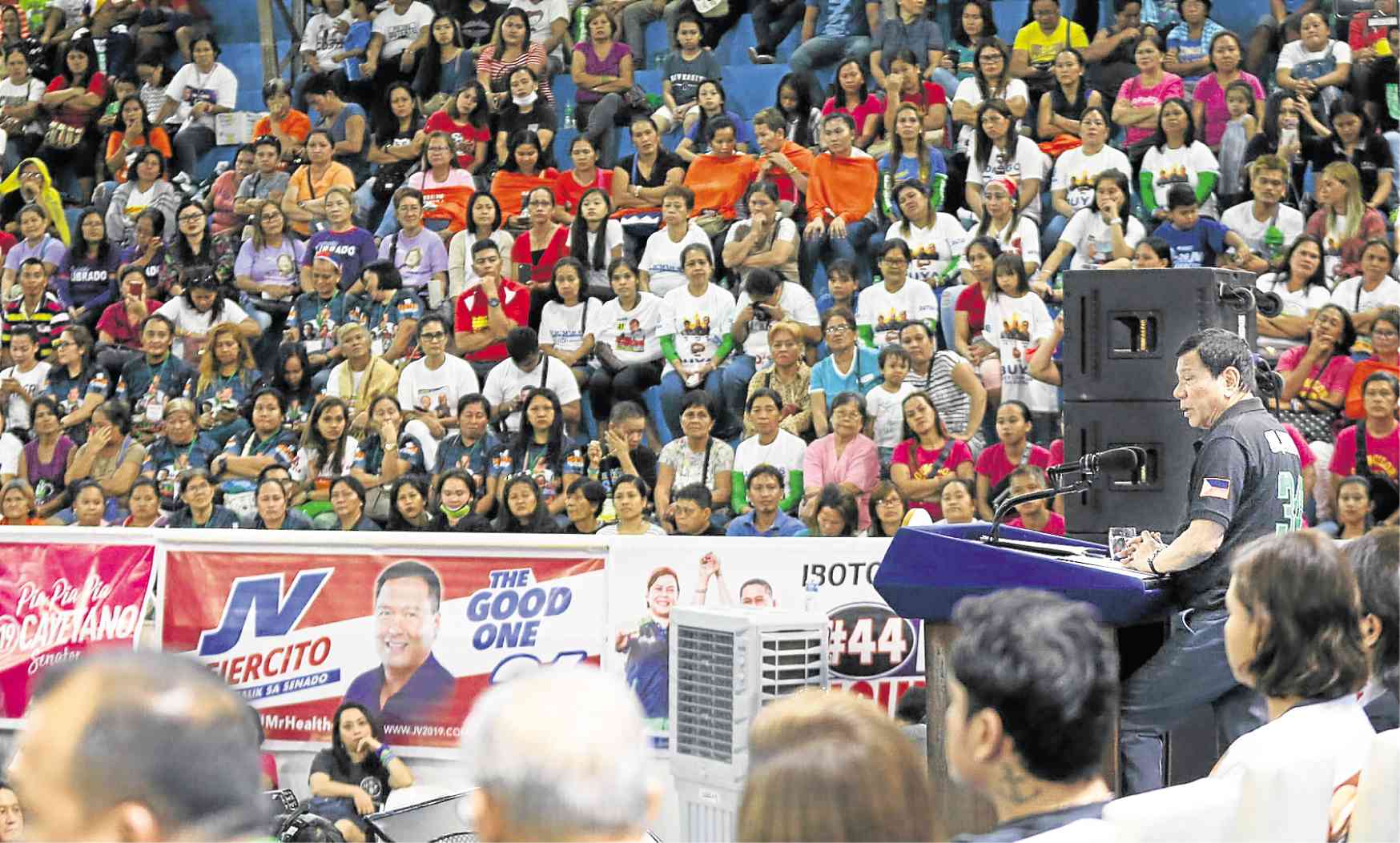 MANILA, Philippines — With their sweep of the latest surveys, administration candidates appear poised to dominate the Senate race and add to the already considerable number of President Rodrigo Duterte’s allies in the chamber.

But Sen. Aquilino “Koko Pimentel Jr., the President’s party mate in the ruling Partido Demokratiko Pilipino-Lakas ng Bayan, said this would not make the Senate less independent. He said senators had generally tended to make their own stand on issues even if they were identified with the administration.

“Senators receive a national mandate,” Pimentel said in a phone interview. “They feel that their mandate comes from the people. In general, their loyalty is to the people.”

Nevertheless, a supermajority in Congress will not make it easier for the President to push his legislative agenda, with a Senate gradually growing more independent, Victor Andres Manhit, founder and managing director of the advisory and research consultancy group Stratbase, told the Inquirer.

But the idea of a looming supermajority of administration allies in the Senate is not bothering the opposition, according to Vice President Leni Robredo.

“We are confident that the energy and enthusiasm of our amazing volunteers will allow us to pull a surprise on Election Day,” Robredo said in an e-mail interview on Wednesday.

On the same day, Robredo and the opposition coalition Otso Diretso rallied their supporters even as strong rains soaked their “thanksgiving gathering” at the University of the Philippines Diliman.

With the groundswell of support seen in volunteers young and old, the fight is “far from over,” Robredo said. “The campaign has really energized a lot of Filipinos who normally do not participate that actively in political campaigns.”

Manhit said senators were now inclined to think more of their political interests in 2022.

“We have to expect that [the Senate and the House of Representatives] will have the same supermajority that they have had these past three years,” he said, noting that nobody would want to challenge the President, a “popular, strong executive.”

“But we are entering the last three years of his presidency,” Manhit said. “So they might be in a coalition and supportive initially, [or in] these coming few months. But as we move closer to 2022 we have to expect the Senate to be more independent because the Senate is actually becoming independent without us realizing it,” he said.

Manhit cited Senate President Vicente Sotto III’s move of questioning the insertions in the proposed 2019 national budget drafted by the House, as well as the seeming rush to switch to a federal form of government.

He added: “The Senate has done independent acts that we haven’t noticed but [most senators] remain in a coalition … It’s a reality that the President, given his popularity, will have a strong supermajority still. But will [the senators] say ‘yes’ in everything? I think the Senate will be more independent.”

Pimentel pointed out that there would be still be a minority in the Senate in the next Congress.

He said that even in a previous administration when there was only a minority of one, the Senate had never been accused of being a rubber stamp.

“Even if the administration wins 12-0, there will still be a minority. A formidable minority still exists,” he said, adding that Minority Leader Franklin Drilon and opposition Senators Francis Pangilinan, Leila de Lima and Risa Hontiveros would remain in the next Congress.

He also said Senators Nancy Binay and Grace Poe had displayed independence in certain instances even if they belonged to the current majority.

Nevertheless, a Senate filled with the President’s allies could make the approval of his legislative agenda easier, Pimentel acknowledged.

Each senator holds much power under the chamber’s rules and may interpellate for a year if he or she wants to delay the approval of legislation, he noted. But an ally in the majority will be easier to request to wind up, he said.

Not all of the items on the President’s agenda have hurdled Congress.

The legislature has not been in agreement on Charter change, which has derailed the push for a shift to federalism. Moreover, not all the senators, including those from the majority, are sold on the idea.

Robredo pointed out that there were still independent voices in the legislature.

“While we believe that there are still enough members in the present Senate who are independent enough to make the right calls when it comes to protecting our democracy, we are hoping that more independent-minded senators, like those running under Otso Diretso, will join them after the elections,” she said.

“The surveys reflect that disparity in resources,” Robredo said.

But the awareness of the odds stacked against them may still prove useful in the end, if the house-to-house campaigns and other efforts of their volunteers would translate to sufficient numbers.

Robredo said the opposition would provide checks and balances and, in a sense, a “political conscience” for the administration.

“The opposition is not there to make the administration look bad or to stand in the way of its initiatives, but to make sure that incumbent officials do their jobs in the best way they can and without abuse of power or corruption,” she said.

Should Otso Diretso candidates win Senate seats, Robredo said, their priorities had been made clear in their platforms: defense of resources and territory; creation of more and better jobs; protection of the people from violence; better delivery of public services; and upholding of the Constitution and human rights.

Repealing the Tax Reform for Acceleration and Inclusion (TRAIN) Act, a recently passed tax measure that has been widely blamed for the rising cost of goods, is also listed among the priorities.

Manhit said that even if after the elections two or three newcomers from the administration slate made it, the Senate would still have its core of sitting members.

“[Administration newcomers] will be part of the majority, but will they influence [decision-making]? They might be a minority within the majority because the majority might like to be more independent, [though] not to be the opposition to the President,” the analyst said, noting that the midterm elections were a referendum for the President who would expectedly utilize the exercise to further strengthen his political capital and support base.

During the President’s remaining three years in office, “some of these politicians will continue to be supportive but will be more independent because they’re thinking of their political interests come 2022,” Manhit said.

“I see the Senate as not obstructionist, not going opposition, but shifting to becoming more independent, slowly,” he said.

Thus, Manhit said, senators would be voting to pass a piece of legislation because the public wanted it and not simply at the President’s bidding.

He said the Senate, in its gradual shift to independence with the goal of establishing its populism, would be inclined to pursue President’s legislative agenda only if it would be beneficial to the general public—again in preparation for 2022.

Manhit said a Senate not completely behind the President’s legislative agenda was always valuable in terms of ensuring that the people would be protected from laws that may prove disadvantageous to them.

He also said someone from an independent Senate might emerge as a strong alternative for the presidency in 2022 since members of the Liberal Party, the  minority, were generally viewed as obstructionist by most people, particularly the President’s supporters.

“Senators still evaluate very critical measures and proposals, so even though there’s the supermajority of some sort in this coming 18th Congress, there will be strong voices that will awaken the consciousness of other senators,” Gatchalian said on Wednesday.

While 16 members of the present Senate are “supportive [of] and cooperative” with the administration, this should not be taken to mean that they “blindly follow” its proposals, he said, recalling how senators “hotly debated” the TRAIN law before it was passed.

What is shaping up to be a supermajority in the Senate should not come as a surprise given the administration’s high approval rating, Gatchalian said.

“The public likes the kind of service they are getting from this government, so they will naturally vote for the endorsed candidates,” he said.

Sought for comment on the potential supermajority in the Senate, Hugpong ng Pagbabago campaign manager and Davao City Mayor Sara Duterte said: “No comment.” —With a report from Melvin Gascon