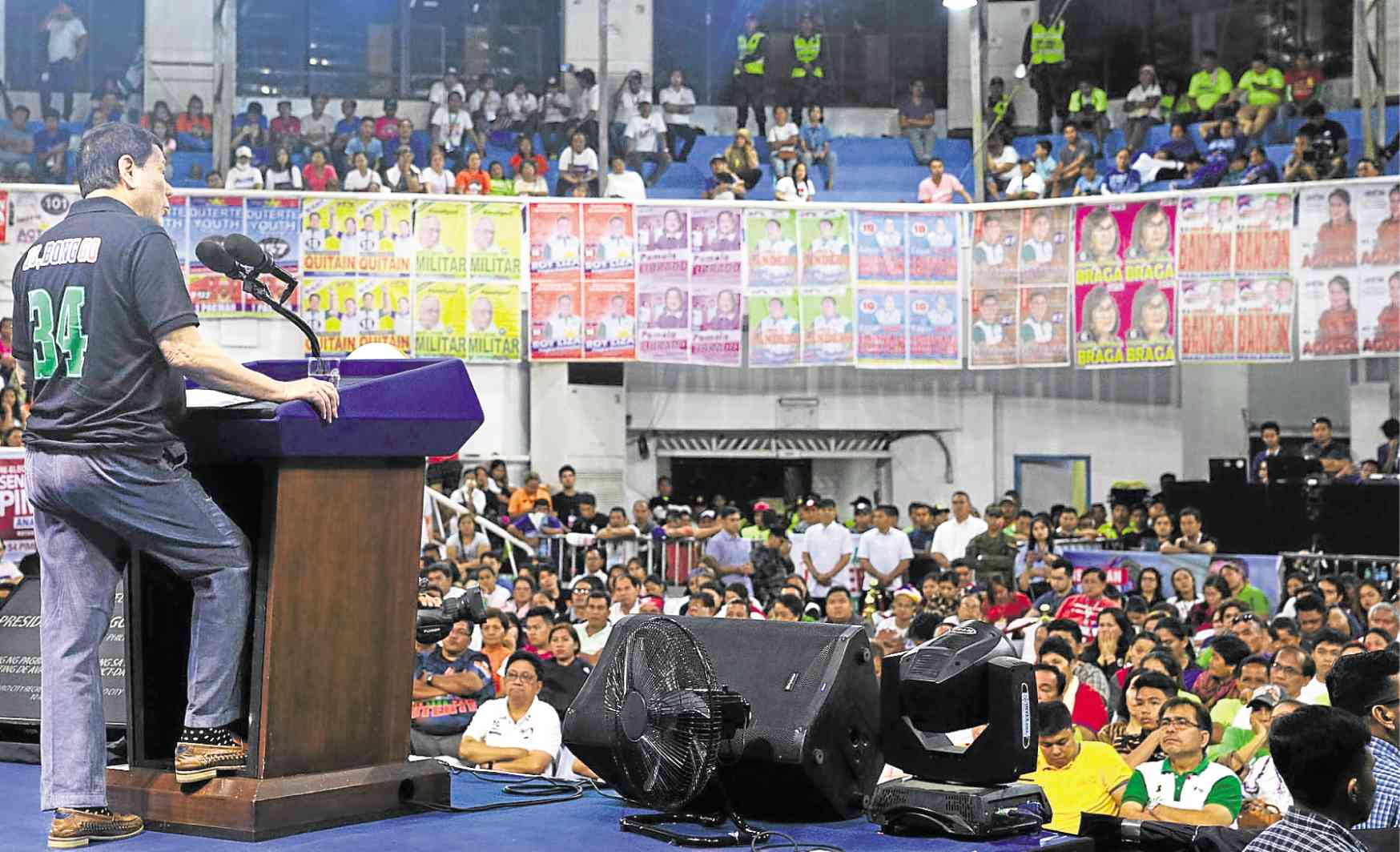 DAVAO CITY, DAVAO DEL SUR, Philippines — Amid reminders by a Church-based group that the faithful would commit a sin if they sold their votes in Monday’s midterm elections, President Duterte told supporters it was OK to accept money if it was for public transport fare.

The President said he had no problem with handing “plite” (Visayan for fare) to supporters who attended the Hugpong ng Pagbabago (HnP) campaign rally here on Friday night.

But when reminded that it was an election offense to distribute cash during the campaign period, he said: “Just tell them, you took the money not for the vote but because you want your fare to get home.”

The Parish Pastoral Council for Responsible Voting (PPCRV) on Saturday repeated its stand against vote buying and reminded the public that it was a sin to sell their vote.

“It’s a sin, [it goes] against the seventh and 10th commandments. Stealing and coveting the  right of the other to vote freely and responsibly, enticing the other to commit a crime,” said Henrietta de Villa, chair emeritus of PPCRV, the nonsectarian, nonpartisan watchdog for free, fair and fraud-free elections.

Near the end of his hourlong speech on Friday night’s grand rally of HnP candidates led by his daughter Mayor Sara Duterte, the President turned to the candidates and asked, “Walay ihatag nga P100 (We have no P100 to give)?”

The President’s remark was greeted by shrieks from the audience.

The President then turned to his former special aide Christopher Lawrence “Bong” Go, a senatorial candidate, who told him campaign laws prohibited it.

“Bawal (Against the law)? How would these people get home?” the President said.

He then explained that since the prohibition was “penal” and that candidates could be jailed if they violated it, the people should just say that they attended a meeting and had borrowed money for their fare to Almendras gym, the campaign rally’s venue.

“Tell them, if you don’t take the money, you will have to roam San Pedro [Street] offering yourself there [for sale], before you could go home,” he said, eliciting laughter from the full-house crowd of about 3,000.

The President took a dig at the Commission on Elections (Comelec) over what he said were “unrealistic” regulations on financial assistance to supporters and local leaders of candidates.

He also criticized the supposed prohibition on feeding supporters and poll watchers.

“You can’t let your leaders go hungry. How will you win?” the President asked in Cebuano. “Don’t believe the Comelec.”

The President told his supporters he might be able to give them a small amount, but “the big projects would come later.”

People interviewed by the Inquirer after attending the rally said they did not receive transport fare from any of the candidates.

On Saturday, the PPCRV said it was dismayed that vote buying and vote selling had become part of the country’s election culture.

“It somehow confirms a breakdown of moral values of Filipinos,” De Villa said.

The Comelec earlier urged voters to immediately report to the authorities incidents of vote buying.

The poll body said this was to ensure that erring candidates would be prosecuted, since mere photographs of vote buying may not be enough proof of wrongdoing.

On Wednesday, the Comelec launched “Task Force Kontra Bigay,” in partnership with the Philippine National Police, Department of the Interior and Local Government, National Bureau of Investigation and Integrated Bar of the Philippines to speed up the investigation of vote buying incidents and the prosecution of the accused.

Vote buying and selling are considered serious election offenses that carry a prison term of not less than one year but not more than six years, as well as disqualification from voting and holding public office.

De Villa also appealed to the public not to vote for candidates who planned to buy their way into office.

“They are deceiving you. They are cheating our democracy. They are not honest. They are stealing the integrity of our elections, of our voters and yours,” she said.

To help guide voters on Monday, the PPCRV said they should only vote for candidates who passed the “3K” criteria: karakter, kakayahan, katapatan (character, competence and integrity).