Nancy Binay has ‘no grudge’ vs father for backing Abby 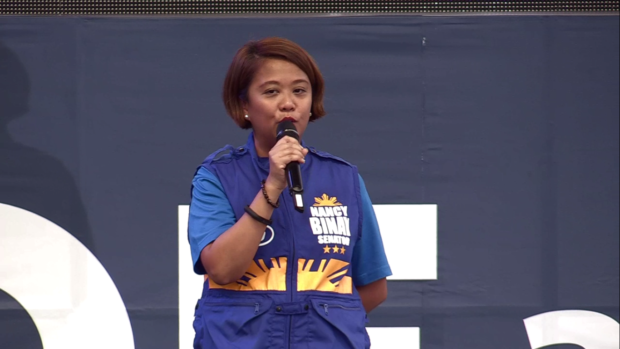 In fact, she said, the Binay patriarch had been joining her brother Junjun for lunch in the past three months despite the feud between her brother and sister.

“These past three months, every Sunday, he’s with me and Junjun for lunch and not with Mayor Abby,” Nancy, speaking partly in Filipino, told reporters before the start of her mitín de avance in Makati on Saturday.

Nancy has been supporting her younger brother Junjun, who is running against their sister Abby for the Makati mayoralty.

The former Vice President joined Abby at her mitín de avance on Metropolitan Avenue in Makati on Friday.

Despite this, Nancy said he still respected his father and that she even campaigned for the former Vice President, who is running for the position of Makati 1st District representative.

“He’s still our father and we should respect him. In fact, I’m also campaigning for my daddy,” Nancy said.

Nancy is seeking reelection under the United Nationalist Alliance, her father’s party.