newsinfo / Nation
Nation
DESPITE MANY MISTAKES 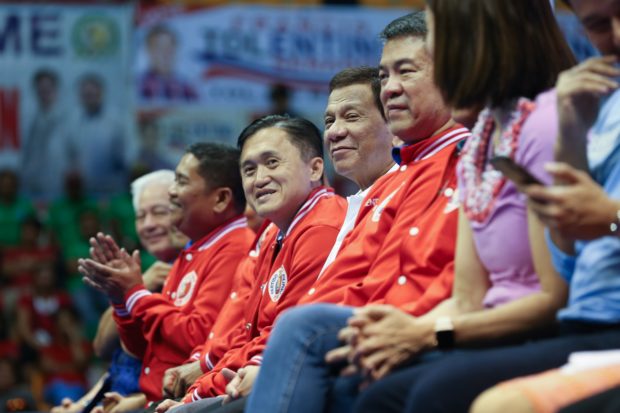 MANILA, Philippines — The campaign of the administration senatorial slate, though far from perfect, has turned out to be “reasonable” and “successful,” according to re-electionist Sen. Aquilino Pimentel III.

Speaking to reporters at the Partido Demokratiko Pilipino–Lakas ng Bayan (PDP-Laban)’ mitin de avance in Pasig on Saturday, Pimentel noted that the ruling party’s senatorial ticket was able to cover a lot of ground during the three-month campaign.

[Looking back, our campaign was not perfect. Everyone makes mistakes. All our mistakes were acceptable. So this has been a reasonable and successful campaign.]

[We made sure that the PDP-Laban senatorial ticket would visit all the regions. At least, we can say that. We might not have visited all the provinces, but we were able to go to all the regions as a ticket.]

With the campaign period ending on Saturday, Pimentel urged members of the ruling party to prioritize the bets in its slate.

Go out and vote

Pimentel also reminded Filipinos to vote on May 13.

[Because it’s the last day of the campaign period, our request to the people, just a request — I encourage them to go out and vote on Monday. Let’s not waste our right to vote. Choose wisely.”

PDP-Laban is currently holding its last campaign event as of this writing.

The party’s chairman, President Rodrigo Duterte, is expected to grace the event for one final push for his candidates.