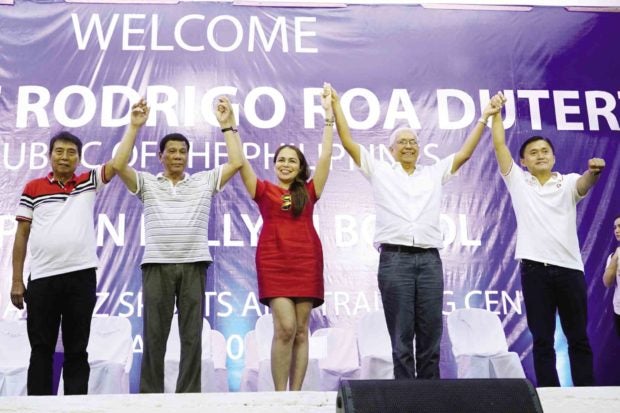 SMITTEN Reelectionist Mayor Tita Baja Gallentes of Garcia Hernandez town in Bohol may have cast her eye on the elective post, but President Duterte apparently has his eyes on her. In a speech before he raised her hand, Duterte said he’d like to grab her by her underpants and not let go “until the garter snaps.” Gallentes said “it was clearly a joke.” —MALACAÑANG PHOTO

MANILA, Philippines — A women’s research institute on Saturday vowed to give zero votes to the candidates endorsed by President Rodrigo Duterte after he publicly flirted with a Bohol mayor.

“[Y]ou are truly beautiful. If it were me, why would I ever break up with you? I will really grab and hold on to your panty if you try to leave, even until the garter snaps. You’re just too beautiful,” Duterte told Baja-Gallantes in Cebuano, which drew cheers from the crowd.

In a statement, the Center for Women’s Resources (CWR) said that Duterte’s latest joke did not make women laugh, but rather found it offensive.

“We are never get used to the so-called sexist jokes of the President. And we will never allow more misogynists and copycats to assume into power,” CWR executive director Jojo Guan said.

Guan added that Duterte “uses his position to intimidate and degrade women, and then he gets away with it.”

“Worse, his endorsed candidates mimic his arrogance and coarseness, even while they are not in any position yet,” the CWR executive director said.  “They are like monsters waiting to be unleashed once they get elected.”

The CWR cited instances that Duterte-backed candidates also made sexist remarks in the past, particularly Francis Tolentino’s “surprise gift” of girls during the 2016 elections, Ronald “Bato” dela Rosa’s kiss-to-know Kapampangan joke and Christopher “Bong” Go’s defense of the President’s jokes.

“The power play and hierarchy can be seen when women who are subjected to such ridicule often dismiss the lustful remarks as mere jokes and defend the culprits,” Guan said.

“As women, we can always reclaim our voices and assert our rights. As a first step, we should remember who are the offenders,” Guan appealed to women to fight back to those who oppress them.

“For instance, who among the president’s allies and aspiring officials are infamous for looking down on women’s worth and violating women’s rights,” Guan added.

“President Duterte and his enabler allies are already too much to handle. We don’t need more sexist and misogynist people in the government. So on Monday, let us fill out our ballots and shade the names of candidates we want to win.” (Editor: Jonathan P. Vicente)