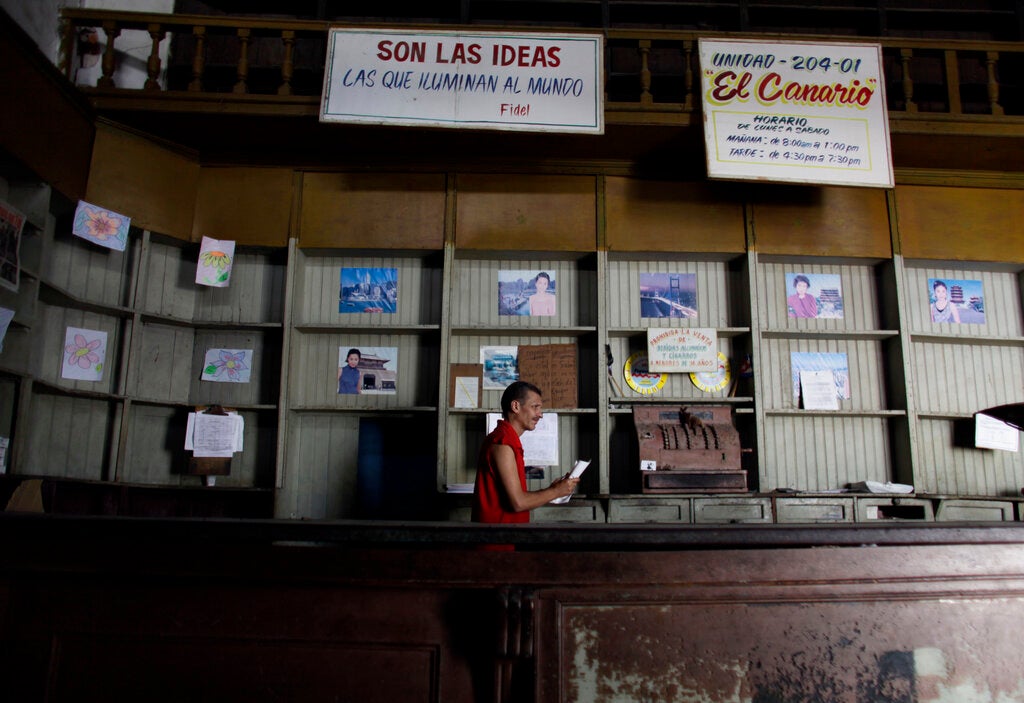 In this Oct. 9, 2009 file photo, an employee works in a government food store with empty shelves in Havana, Cuba. The Cuban government said, Friday, May 10, 2019, that it will begin rationing chicken, eggs, rice, beans, soap and other basic products in the face of a grave economic crisis. (AP)

HAVANA — The Cuban government announced Friday that it is launching widespread rationing of chicken, eggs, rice, beans, soap and other basic products in the face of a grave economic crisis.

Commerce Minister Betsy Díaz Velázquez told the state-run Cuban News Agency that various forms of rationing would be employed in order to deal with shortages of staple foods. She blamed the hardening of the U.S. trade embargo by the Trump administration.

Economists give equal or greater blame to a plunge in aid from Venezuela, where the collapse of the state-run oil company has led to a nearly two-thirds cut in shipments of subsidized fuel that Cuba used for power and to earn hard currency on the open market.

“We’re calling for calm,” Díaz said, adding that Cubans should feel reassured that at least cooking oil would be in ample supply. “It’s not a product that will be absent from the market in any way.”

Cuba imports roughly two thirds of its food at an annual cost of more than $2 billion and brief shortages of individual products have been common for years. In recent months, a growing number of products have started to go missing for days or weeks at a time, and long lines have sprung up within minutes of the appearance of scarce products like chicken or flour. Many shoppers find themselves still standing in line when the products run out, a problem the government has been blaming on “hoarders.”

“The country’s going through a tough moment. This is the right response. Without this, there’ll be hoarders. I just got out of work and I was able to buy hot dogs,” said Lazara García, a 56-year-old tobacco-factory worker.

Manuel Ordoñez, 43, who identified himself as a small business owner, said the new measures would do nothing to resolve Cuban’s fundamental problems.

“What the country needs to do is produce. Sufficient merchandise is what will lead to shorter lines,” he said.

Limited rationing of certain products has already begun in many parts of the country, with stores limiting the number of items like bottles of cooking oil that a single shopper can purchase. The policy announced by Díaz appears to go further and apply the same standards across the country of 11 million people.

Food stores in Cuba are government-run and sell products ranging from highly subsidized to wildly overpriced by global standards. Every Cuban receives a ration book that allows them to buy small quantities of basic goods like rice, beans, eggs and sugar each month for payment equivalent to a few U.S. cents.

Cubans with enough money can buy more of those basic goods at “liberated” prices that are still generally below the world average. At the highest of Cuba’s three tiers, brand-name goods from high-quality rice to fancy jams can be purchased for often two to three times the price in their country of origin.

Díaz said chicken will now be sold in limited quantities in every type of store — with cheaper chicken limited to 11 pounds per purchase and the more expensive variety capped at two packages per purchase.

Low-priced soap, rice, bean, peas and eggs will now only be sold in limited quantities per person and controlled through the national system of ration books, she said.

Sales of those products at higher prices do not appear to be affected for the moment. The measures can be expected to have a serious impact on private business owners who often buy cheaper-priced goods at state stores in the absence of access to a wholesale market. Cuba maintains a total monopoly on wholesale commerce, imports and exports, with virtually no access for the country’s small but growing private sector.

Díaz provided a grim series of statistics on food production by the state-run sector, which has found itself struggling to find the cash it needs to pay for basic inputs.

She said that in March Cuba produced 900,000 fewer eggs than the 5.7 million needed daily to satisfy national demand. That deficit shrank to 600,000 by mid-April, she said. The production of pork, the most-consumed meat in Cuba and a normally affordable staple of most people’s diets, is hundreds of tons below target.

Díaz said importing food from U.S. producers had become more complicated under Trump, forcing Cuba to search for products that were more expensive and difficult to import.

“Selling limited quantities will lead to equal distribution, so that the greatest number of people can buy the product, and we can avoid hoarding,” she said.