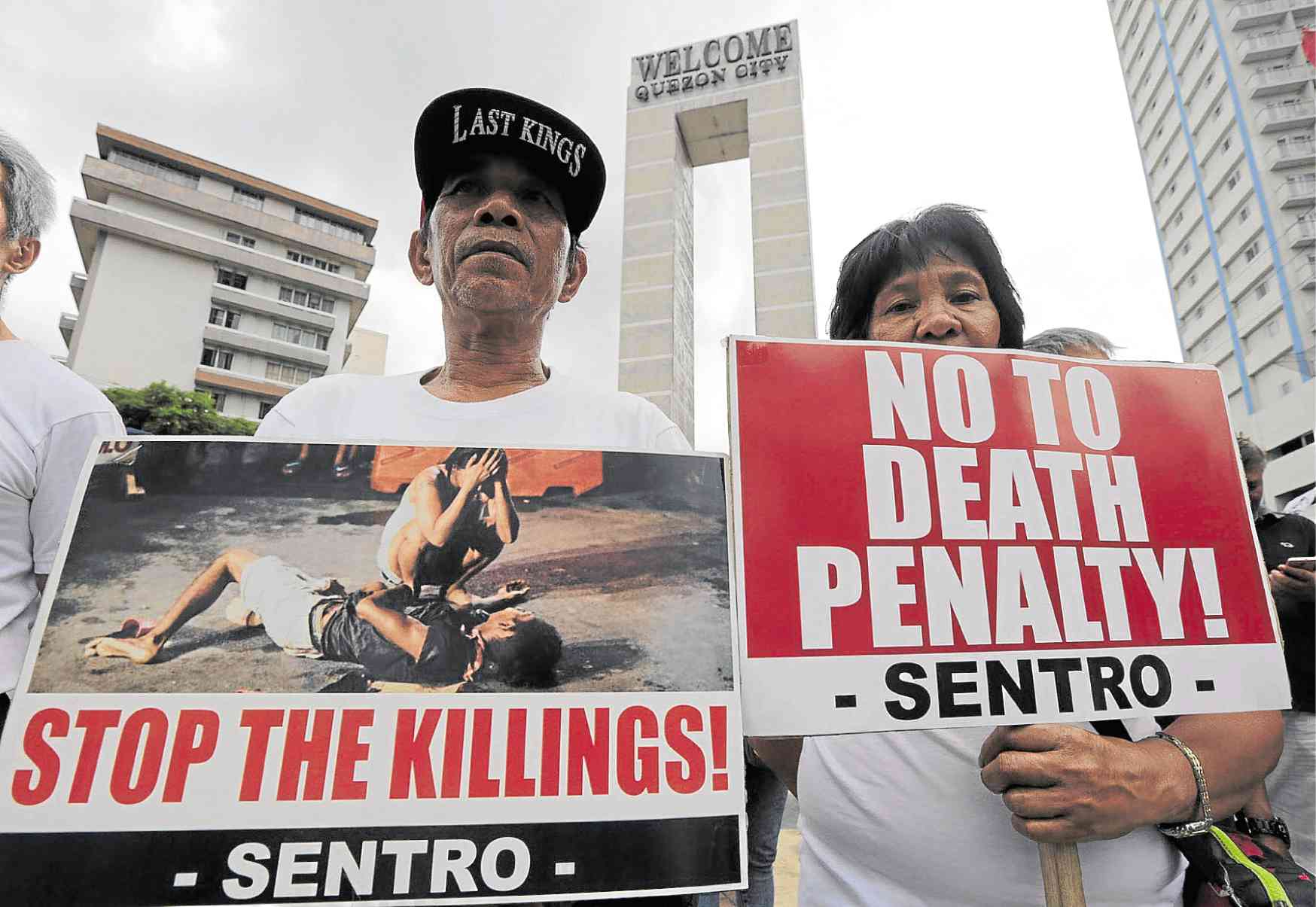 SAYING NO Militants denounce the killings in the war on drugs as well as calls for the return of the death penalty in this file photo. —GRIG C. MONTEGRANDE

President Duterte is expected to strengthen his grip on power in midterm elections next week, experts say, clearing a possible path to restoring the death penalty and advancing his pledge to rewrite the Constitution.

Duterte has found international infamy for his foul-mouthed tirades, but remains hugely popular among Filipinos fed up with the country’s dysfunction and elite politicians.

He has pledged to bring back capital punishment for drug-related crimes as part of a deadly crackdown on narcotics in which thousands of alleged pushers and users have already been killed.

The President’s tough-on-crime platform, which also includes lowering the age of criminal responsibility from 15 to 12, was key to his landslide election victory in 2016.

Among the 18,000 posts up for grabs on Monday are half of the seats in the Senate, which has stopped cold some of Duterte’s most controversial policy initiatives.

Opinion polls suggest administration loyalists are strong favorites to capture the Senate and keep control of the House of Representatives.

Duterte has also pledged to rewrite the Constitution, which would open avenues to prolonging his power beyond a legally mandated single term that ends in 2022, according to opposition politicians.

Any change in the Constitution, however, would require lawmakers’ backing as well as popular approval in a referendum, a high bar that has stymied reform attempts by earlier presidents.

Capital punishment and constitutional reform bills have both sailed through the House with little opposition since 2016, but were halted by the Senate’s mix of administration opponents and independents.

“The Senate has acted as some sort of institutional check on the worst instincts of the President,” political analyst Richard Heydarian told Agence France-Presse (AFP).

But he warned that could change after Monday’s elections.

An opening for Duterte

Historically, the 24 senators who serve six-year terms have had a reputation for being more independent-minded than their House counterparts.

An opinion poll from Pulse Asia, based on face-to-face interviews with 1,800 likely voters, has key administration supporters taking the majority of the 12 open Senate seats.

Imee Marcos, daughter of the late dictator Ferdinand Marcos, is expected to win one and thus extend the family’s remarkable political return in the decades since it was chased from power by the 1986 Edsa People Power Revolution.

The first enforcer of Duterte’s drug war, former Philippine National Police chief Ronald dela Rosa, is also well-positioned despite some of the crackdown’s most well-known abuses happening on his watch.

Duterte has thrown some of his strongest support behind former presidential aide Christopher “Bong” Go, who could serve as a direct link between the President and Senate if he wins a seat.

The death penalty has a twisting past in the country, having been outlawed in 1987, reinstated six years later and then abolished again in 2006.

A capital punishment bill that passed the House in 2017 allowed execution in cases where suspects were caught with 500 grams of marijuana, or 10 grams of cocaine, heroin or ecstasy.

Steven Rood, an expert on Philippine elections, said even taking into account the Senate’s individualistic reputation, the current poll numbers pointed to a runway for Duterte.

“I think it makes more likely that some of the President’s ideas will get through,” Rood said.

The President has pitched constitutional reform as a way to create a new decentralized federal republic where regions would be empowered to fix local problems and spur economic growth.

But the various initiatives launched under Duterte have also included proposals dropping term limits, allowing the President to run for another term and weakening checks on presidential power.

Critics have voiced concern the President could be aiming to extend his time in office, although Duterte regularly says he has no desire to stay on past his term. —AFP