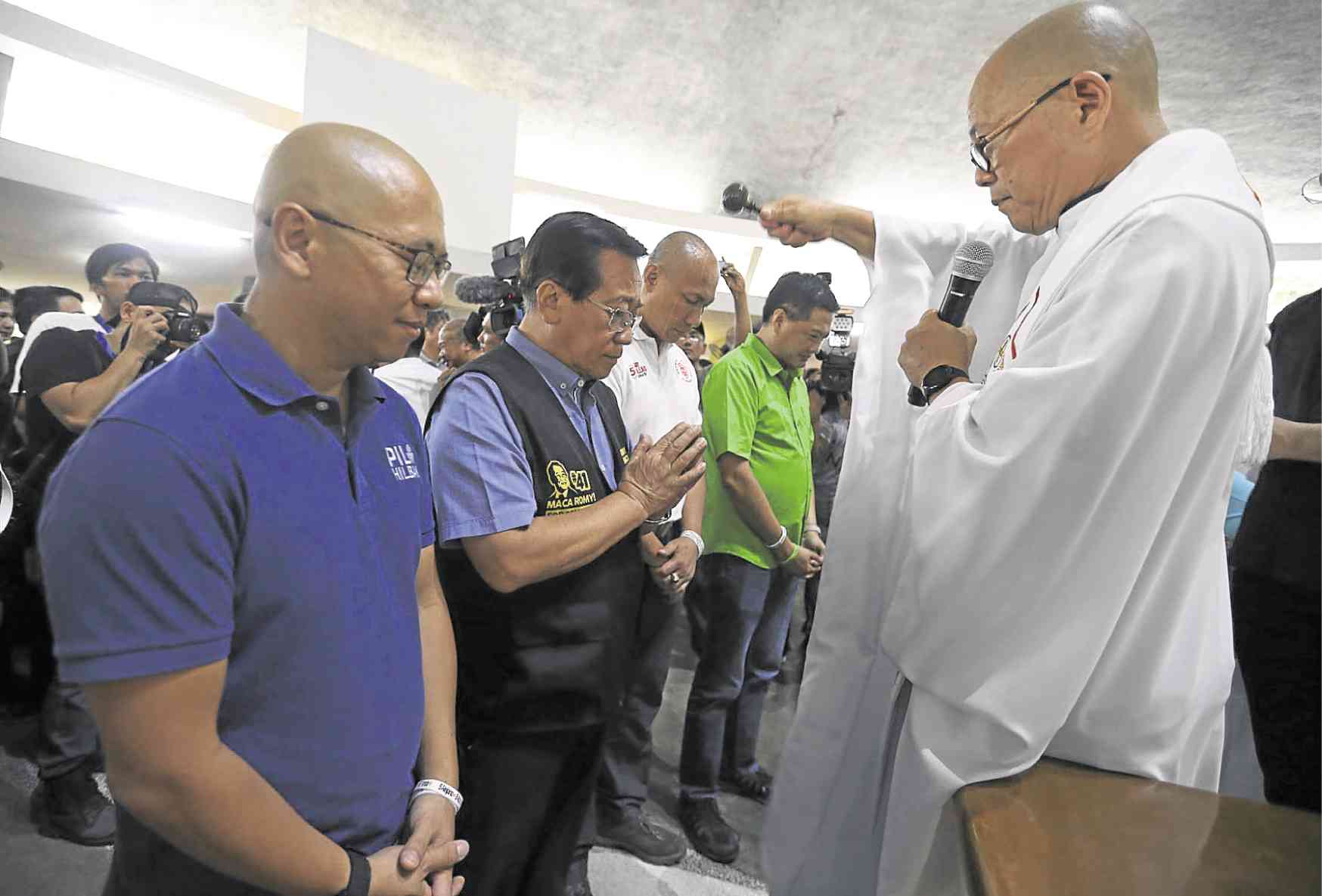 The Catholic Bishops’ Conference of the Philippines (CBCP) on Friday denied reports that it was endorsing the candidates of the opposition coalition Otso Diretso and two other senatorial contenders.

Davao Archbishop Romulo Valles, the CBCP president, said that bishops and priests were not allowed to endorse candidates as this was “clearly partisan politics.”

At the same time, Valles issued an appeal to all Filipinos to “vote wisely,” as he echoed the call of several bishops and lay groups to choose candidates “who are God-fearing and not tainted with graft and corruption.”

The PCM said the candidates were chosen based on a two-level screening process that considered their belief in God and position on national issues, among them federalism and Charter change. They were also rated based on their character and honor, competence and abilities, and their faithfulness to public service, to God, the Constitution and the laws of the land.

In his recent pastoral letter, Manila Archbishop Cardinal Luis Antonio Tagle urged voters to “share this initiative of the lay faithful with the lay groups, youth organizations, [and] circles of discernment in your parish as a guide to their own discernment.”

Sorsogon Bishop Arturo Bastes acknowledged that it was “impossible for Catholics to vote as a bloc,” but they could instead “help the faithful form their conscience regarding their choice of candidates.”

Bastes earlier sought votes for Otso Diretso, Poe and Colmenares as he warned that “our democracy is in danger.”

“So we in the Church must vote for the 10 candidates who dared oppose Duterte,” he said.

While Balanga Bishop Ruperto Santos agreed that the Church could not impose its choices on the faithful, he reminded voters to choose candidates who were “God-fearing, with good manners and moral character, honest, and not tainted with graft and corruption.”

On his Facebook page, Manila Auxiliary Bishop Broderick Pabillo on Friday shared an image describing the PCM’s 10 candidates as what “our country and people need during these times.”

He also asked the voters to pray before casting their ballots.

At a forum in Makati City, Otso Diretso candidates expressed hope that Bastes’ unexpected endorsement could help turn the tide for the opposition candidates.

The endorsement, Gutoc said, showed how important it is for the Church to take a stand “in the face of such a serious decision.”

Diokno, meanwhile, lauded the PCM “whose interest, unlike other groups, is really geared toward [that of] the nation.”

“[The bishops’ endorsement] reflects the kind of confidence that Cardinal Tagle has [about] names that they can be proud of,” Hilbay said.

Macalintal said he hoped the endorsement would inspire other religious groups to follow suit and realize that the Church “follows a certain standard in choosing their candidates.”

But while the powerful Iglesia ni Cristo bloc leaned toward administration candidates, Tañada said “the final say here is [with] the people.”

Also on Friday, Otso Diretso candidates followed up on the status of the law passed by Congress to formally establish the Pantawid Pamilyang Pilipino Program (4Ps) championed by the administration of former President Benigno Aquino III.

The opposition-led bill, according to Otso Diretso, was transmitted to Malacañang for the President’s signature on March 21 and should have lapsed into law 30 days after that, assuming that Duterte did not veto it.

“We need to guarantee and ensure that the assistance to the poor will not just stop because of politics,” Roxas said in a statement.

“Assistance to poor families will be guaranteed as 4Ps is not just a program, but a law that will get annual funding,” Hilbay said.

Eligible for the 4Ps program are Filipinos belonging to the informal sector, homeless families, indigenous peoples, and those living in isolated and disadvantaged areas.

The measure provides conditional cash transfers to poor households for a maximum period of seven years to improve their health, nutrition and access to education.

It mandates the Department of Social Welfare and Development to conduct and revalidate qualified beneficiaries using a standard targeting system every three years. —WITH REPORTS FROM KRIXIA SUBINGSUBING AND DJ YAP