Bohol town mayor not offended by Duterte joke, but Gabriela seethes over it 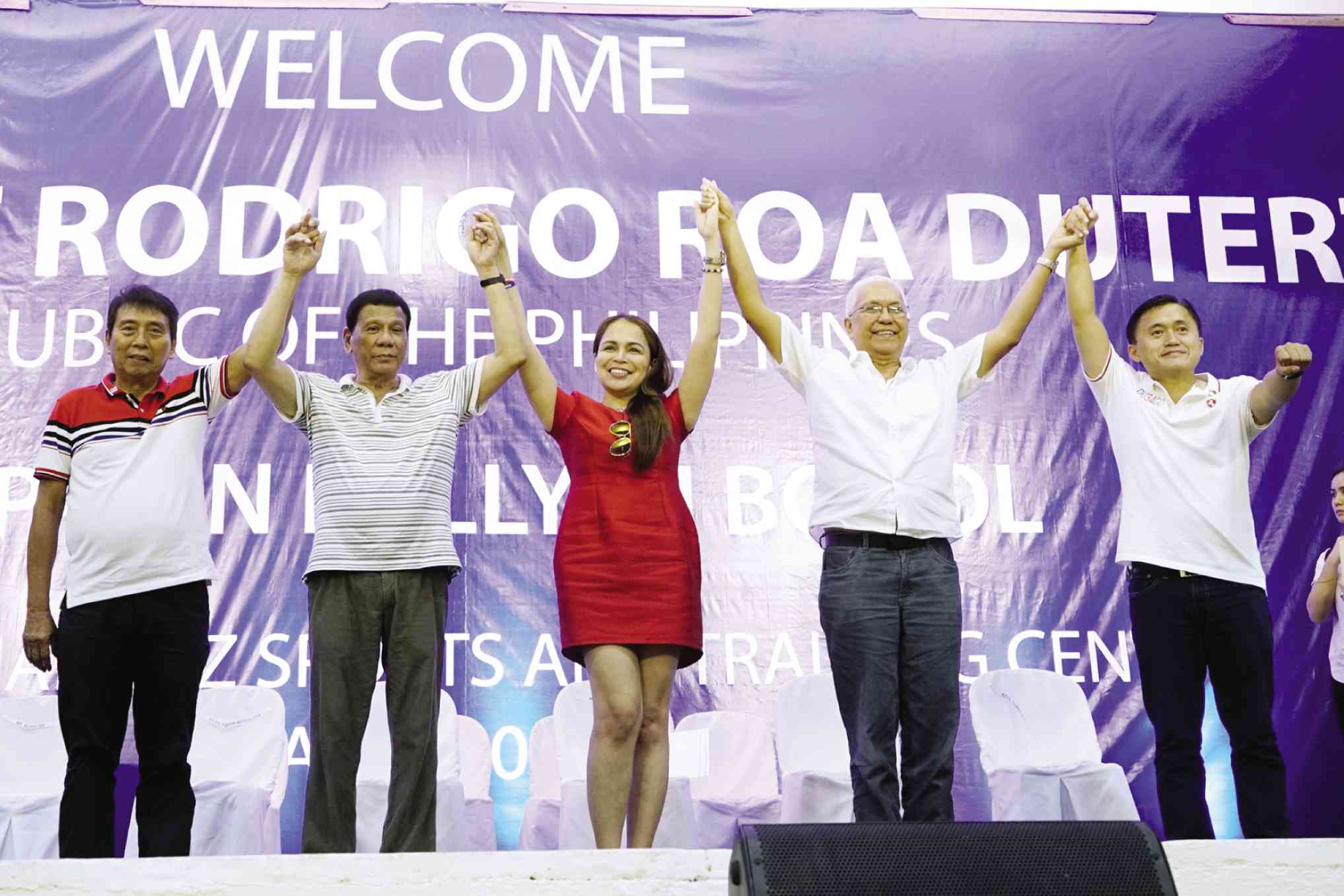 SMITTEN Reelectionist Mayor Tita Baja Gallentes of Garcia Hernandez town in Bohol may have cast her eye on the elective post, but President Duterte apparently has his eyes on her. In a speech before he raised her hand, Duterte said he’d like to grab her by her underpants and not let go “until the garter snaps.” Gallentes said “it was clearly a joke.” —MALACAÑANG PHOTO

“In my 15 years as a politician, I am no longer shocked by those things. I know what is a joke and what is not,” said Gallentes, who is seeking reelection.

Duterte, who was campaigning for former Cabinet Secretary Leoncio Evasco Jr., his longtime friend and Bohol gubernatorial candidate, openly flirted with the mayor onstage and even asked her to “run away” with him.

“You are truly beautiful. If it were [up to] me, why would I ever break up with you? I’d grab and hold on to your panties if you try to leave, until the garter snaps. You’re just too beautiful,” the President said in Cebuano, drawing laughter from the crowd.

Gallentes, who laughed along, said she was not offended by the remarks because like the President, “We Visayans understood that it was a joke to keep people from getting bored,” she said.

But the Gabriela women’s party list on Friday strongly condemned the President’s “sick and disgusting display of machismo, infidelity and ethical bankruptcy,” and called on women voters to make the elections “a platform for the resounding rejection of misogyny and macho-fascist leadership.”

They were referring to the cockroach that crawled on the President’s arm and onto his shirt while he was praising the senatorial candidates of the administration party.

The incident, caught on camera, showed an aide trying to brush off the cockroach with a folder without much success until Duterte, pausing in his speech, flicked it off his shirt.

Akbayan Rep. Tomasito Villarin said Filipinos should demand accountability for the President’s “scandalous and highly vulgar language” so as not to make misogyny a normal behavior among public officials.

“Misogyny has no place in society. The Philippine Commission on Women should rebuke the President and hold him accountable for violating the Magna Carta of Women,” he said.

In Malacañang, presidential spokesperson Salvador Panelo said the President was only “cracking his usual joke” and “trying to make people laugh” when he publicly flirted with Gallantes.

“Even the woman was laughing so hard, because she knows the President to be like that. It’s just ‘pa-kwela’  (for fun),” he said.

“That’s what gets the crowd laughing, right? The Filipinos have become used to that,” Panelo added. 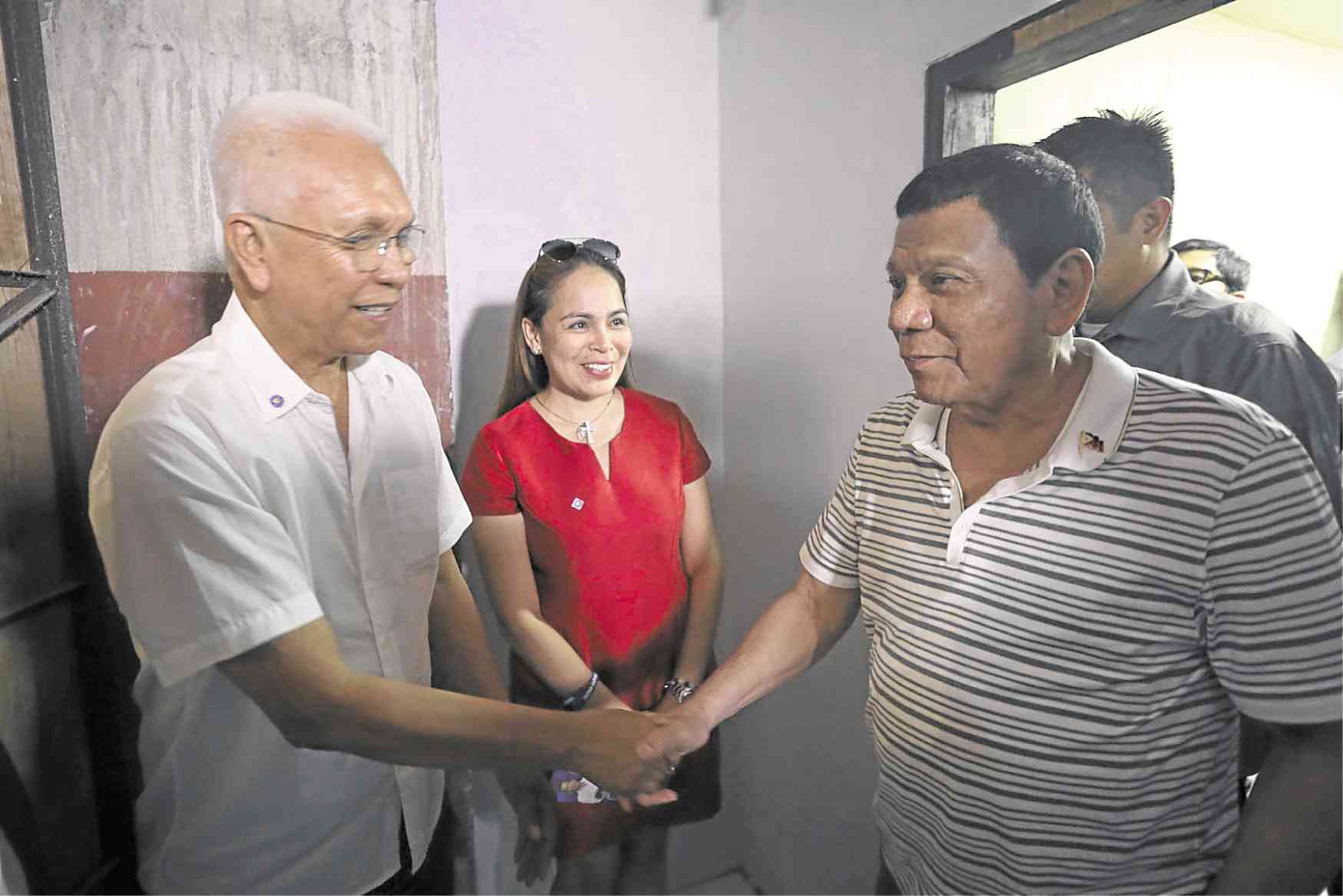 Gallentes said it was public knowledge that she and her husband had parted ways in a legal separation.

“[My marriage is] officially annulled and [I am] single,” she told the Inquirer.

Asked how she felt about the President being smitten with her looks, the mayor quipped, “I am beautiful inside and out.”

Gallentes is running for her third and last term under Partido Federal.

An Evasco supporter, Boy Pernia, said it “[was] wrong to link Duterte’s manners to Evasco because the only similarity [the President] has with Evasco is [their] uncompromising stand [on] those involved in corruption and illegal drugs.”

Joking is part of their culture that most Tagalogs don’t understand, Pernia said.

He said that in some towns of Bohol, locals greeted visitors with expressions like “Cholera, kumusta naman ka? Maayo kay buhi pa ka (Cholera, how are you, good to see that you are not dead),” but people “don’t take  offense.” —WITH REPORTS FROM PATHRICIA ANN V. ROXAS, MELVIN GASCON AND JULIE M. AURELIO