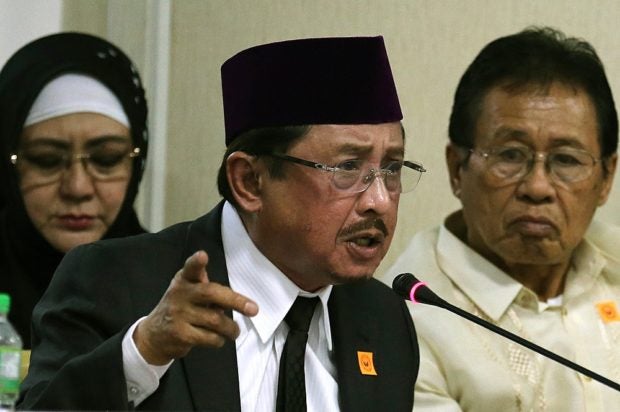 In this May 18, 2015 photo, MNLF Chair Datu Abul Khayr Alonto speaks during a joint hearing of the Senate Committees on Local Government, Peace, Unification and Reconciliation, and Constitutional Amendments and Revion of Codes on the Bangsamoro Basic Law. INQUIRER FILE PHOTO/Raffy Lerma

Presidential Spokesperson Salvador Panelo said “the Palace expresses its deep sympathies and condolences to the family, friends, colleagues and loved ones of the late Secretary Datu Abul Khayr Dangcal Alonto.”

“We are going to miss his amiable and smiling presence. We pray Allah grant him eternal repose of his soul,” Panelo said in a statement.

Alonto, 73, died in Quezon City due to complications from a heart problem.

Panelo said “Alonto served the government in various capacities before he became a member of President Rodrigo Duterte’s cabinet.”

In 1979, he was also elected as an assemblyman and sat as the interim head of the Regional Autonomous Government.

He was the first Muslim Chairperson and Secretary of MinDa.

Panelo said “Alonto devoted his professional career in contributing to the socioeconomic transformation of Mindanao from a land of promise to a land of fulfillment.”

“The nation is grateful for his services and we are confident that his legacy would continue to inspire leaders, government workers, and people to advance the cause of peace and development in Mindanao,” he said. /jpv