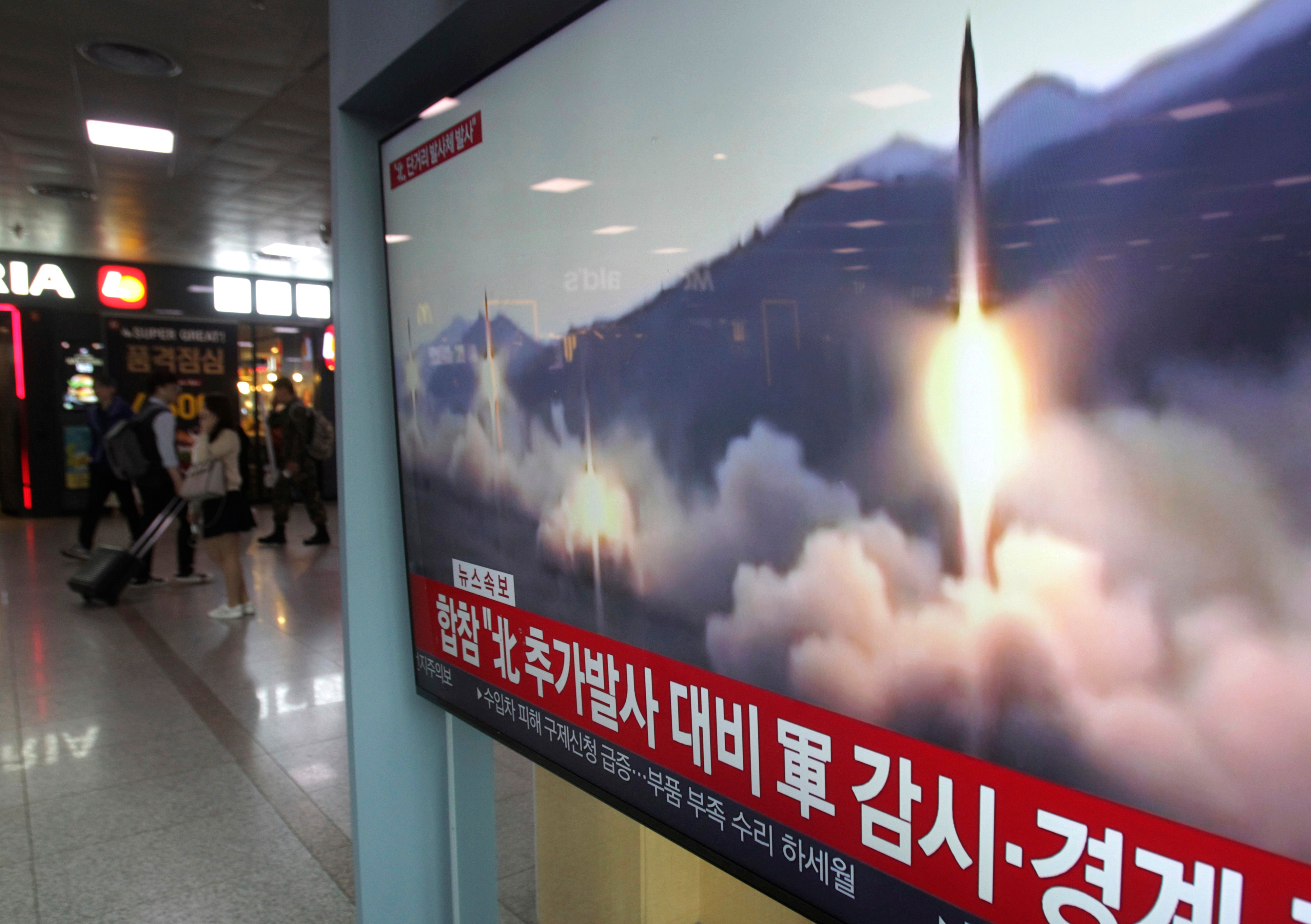 In this May 4, 2019 file photo, A TV screen shows file footage of North Korea’s missile launch during a news program at the Seoul Railway Station in Seoul, South Korea. South Korea’s military says North Korea has fired at least one unidentified projectile from its western area. It’s the second such launch in the last five days. The signs read: “Strengthening military alertness.” (AP Photo/Ahn Young-joon, File)

This is North Korea’s second weapons launch in the last five days and a possible warning that nuclear disarmament talks with Washington could be in danger.

South Korea’s Joint Chiefs of Staff said the weapons fired flew 420 kilometers (260 miles) and 270 kilometers (167 miles), respectively. It said it’s working with the United States to find out more details, such as the type of weapons North Korea fired.

South Korea’s military said earlier at least one projectile was launched from the Sino-ri area of North Pyongan Province, an area known to host one of North Korea’s oldest missile bases where a brigade operates mid-range Rodong missiles.  It said later the launch was made from the province’s Kusong town, about 40 kilometers (25 miles) from Sino-ri, where North Korea conducted its first successful flight test of the Hwasong-12 intermediate range missile in May 2017.

South Korea’s presidential national security director, Chung Eui-yong, has been monitoring the situation while communicating with the Defense Ministry and the Joint Chiefs of Staff by video, according to the presidential Blue House.

There was no immediate comment from the United States.

Some analysts have said that if North Korea returns to testing the kind of longer-range banned ballistic weapons that it fired in unusually large numbers in 2017 — when many feared a Washington-Pyongyang standoff could end in war — it may signal that a frustrated North Korea is turning away from diplomacy.

The tensions in 2017 were followed by a surprising diplomatic outreach by North Korean leader Kim Jong Un in 2018, when he attended summits with the South Korean and Chinese presidents, and with U.S. President Donald Trump. But North Korea has not gotten what it wants most from its summitry: sanctions relief.

A summit earlier this year between Trump and Kim ended in failure, with the United States not believing that North Korea was offering enough disarmament steps to agree to the widespread sanctions relief North Korea wants.

Just ahead of the Thursday launch, senior defense officials from South Korea, the United States, and Japan met in Seoul to discuss North Korea’s launches on Saturday and other security issues. Details from the meeting weren’t immediately announced.

With the consecutive weapons launches, North Korea is pressuring South Korea to diverge from the United States to support North Korea’s position more strongly, said Du Hyeogn Cha, a visiting scholar at Seoul’s Asan Institute for Policy Studies. Following the collapse of the Trump-Kim meeting, North Korea had demanded South Korea to proceed with inter-Korean economic projects held back by U.S.-led sanctions against the North.

By firing weapons that directly threaten South Korea but not the U.S. mainland or its Pacific territories, North Korea also appears to be testing how far Washington would tolerate its bellicosity without actually causing the negotiations to collapse, Cha said.

South Korean and U.S. officials have described what North Korea fired Saturday as “projectiles,” a broader term that include both missiles and artillery pieces. This could be an effort to keep diplomacy alive as United Nations sanctions bar North Korea from engaging in any ballistic activity.

Some observers said North Korea could fire more missiles, including those of a medium range, to up the pressure on the United States. Cha said North Korea won’t likely fire longer-range missile, such as its Hwasong-12 intermediate range missiles and Hwasong-14 and – 15 intercontinental ballistic missiles (ICBMs), unless it intends to abandon diplomacy for good as it’s certain to invite fresh U.N. sanctions.

North Korea last conducted a major missile test in November 2017 when it flight-tested the Hwasong-15, which demonstrated the potential capability to reach deep into the U.S. mainland. Experts think North Korea still needs more tests to make its ICBMs viable.

Kim in a New Year’s speech said he hopes to continue his nuclear summitry with Trump, but also that he would seek a “new way” if the United States persists with sanctions and pressure against his country.

Following the collapse of his second summit with Trump in February, Kim said he is open to a third meeting, but set the year’s end as a deadline for Washington to offer mutually acceptable terms for an agreement. /kga