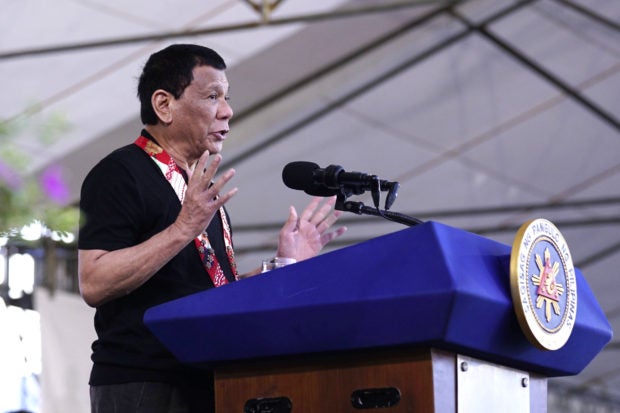 TAGBILARAN CITY — President Rodrigo Duterte has warned a local executive, who was linked to the recent ambush in Negros Occidental, not to stop his constituents from voting freely this May 13.

“Do not do it because ako ang makalaban mo (you will be fighting me),” he said in a speech during a rally in Garcia-Hernandez town, Bohol on Wednesday night.

Mr. Duterte said he talked to the mayor during his visit to Negros Occidental before flying to Bohol.

He told the mayor to be careful and allow everyone to vote freely since it is the people’s right to choose their leader.

“This is the mandate of the Constitution. We just follow,” he added.

President Duterte, however, didn’t name the mayor whom he described as a supporter.

“I really do not know if amigo pa mi ron (we are still friends) after talking to him a few hours ago,” he said.

The President came from Moises Padilla town, Negros Occidental to preside over a command conference with police officials in Western and Central Visayas to discuss security concerns on Negros Island.

He met with Moises Padilla Vice Mayor Ella Garcia-Yulo and assured her that justice would be given to her brother, Mark Garcia, and nephew, Councilor Michael Garcia.

The Garcias were killed in a daring daylight ambush on their convoy on April 25 following a campaign sortie in Barangay Inolingan, Moises Padilla.

Garcia-Yulo, who is running for mayor against incumbent Mayor Magdaleno Peña, was in the convoy but was not hurt.

She told reporters in Negros Occidental that the President vowed to do everything to secure justice for the family.

In a speech in Bohol, President Duterte said he talked to a “certain mayor” and told him frankly that “if you create so much problem for everybody, you might find yourself the ultimate solution.”

“You just be careful. Allow everybody to vote freely. This is a democracy, an exercise on the right of the people to choose their leader,” he added.

Mr. Duterte recalled his experience in Mindanao during the elections. While it was hotly contested, he added, they didn’t kill or ambush their opponents.

He said he told the mayor to just follow the rules so there would be no trouble.

“This is for my candidates and for the opposition-–everybody’s stand or position must be respected. That is the rule in this country,” he added.