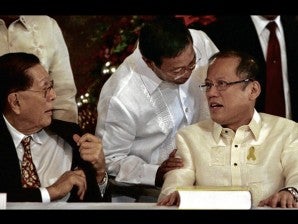 Amid criticism from impeached Chief Justice Renato Corona that he was neglecting the economy and the poor, President Benigno Aquino III on Thursday signed the P1.816-trillion national budget for 2012, saying he had not forgotten his priorities while his administration was going after those who had failed the people.

The national budget is 10.4 percent bigger than the P1.645-trillion budget for this year.

Shortly after signing into law the 2012 national budget, Mr. Aquino said the appropriations were “results-focused” and prioritized the administration’s “social contract with the Filipino people.”

He said the budget would address the people’s basic needs from food and education to health.

The budget, for instance, will set aside P39.5 billion for the conditional cash transfer (CCT) program for three million of the poorest households in the country, the President said. The P21.3 billion allocated for the program this year covers 2.3 million poor families.

The program provides poor families a monthly cash allowance of up to P1,400 (P500 per household and P300 per child for up to three children) in exchange for ensuring that children aged 6 to 14 attend school and avail themselves of vaccination and other medical benefits.

Poor people, who are at least 75 years old, will get P500 a month under the Social Pension for Indigent Senior Filipino Citizens, which has been allotted P1.2 billion. Close to 200,000 people are expected to benefit from the program.

The President thanked lawmakers for their swift approval of the national budget, noting that this was the first budget measure that was signed into law very early since the restoration of democracy in the country in 1986.

“Indeed, this is a truly historic day,” he said in a speech he delivered after the budget signing witnessed by lawmakers led by Senate President Juan Ponce Enrile and House Speaker Feliciano Belmonte Jr.

Mr. Aquino assured the public that “every peso” to be spent by the administration next year would provide “concrete and measurable results that would benefit the poor.”

He said that while his administration was going after those who governed wrongly and aligned with the corrupt, he had not forgotten his priorities.

“Concurrent (with this fight), this budget symbolizes the daily and bigger aspect of justice; that we ensure that no Filipino will be left behind; that each Filipino will be able to be given the chance to be able to achieve their desires; and that the system will not be only for those who have power but will also take care of those in the lower ends,” Mr. Aquino said.

He was apparently reacting to Corona’s call for the President to pursue economic reforms and help the poor instead of pressing the charges against the Chief Justice.

Corona is set to stand trial in the Senate in January after the House of Representatives impeached him on Monday. He is accused of favoring former President and now Pampanga Representative Gloria Macapagal-Arroyo, who is under hospital arrest on charges of election sabotage, in a number of high court rulings.

Mr. Aquino noted that over 30 percent or P568.6 billion of next year’s budget would go to social services.

He also said that he had increased allocations for basic education, with the Department of Education getting P238.8 billion, “the biggest budget of all departments.”

Through this budget, the government will hire 13,000 new teachers, build and rehabilitate more than 43,000 classrooms, and provide quality education to the poor youth, the President said.

“And like last year since I assumed office, funds for our state colleges and universities have increased,” he said.

The Department of Health will get P44.4 billion.

To critics who blasted his administration for its slow spending, the President said big and fast spending would be of no use if the money would not go to its intended purpose.

“In the road to the right path, the projects are of high quality and will not go to corruption. These will benefit the people,” he said.

Mr. Aquino said he expected at least P140 billion of infrastructure projects to be implemented starting next month to help shore up the economy given the  economic slowdown abroad.

He said the infrastructure project would “grow the economy and create jobs.”

“We have invested almost P255.2 billion, which is 33 percent more compared to this year, for infrastructure and capital outlays—roads and bridges, airports, ports, irrigation systems and other agrarian infrastructure, flood- and landslide-control projects and others,” the President said.

Mr. Aquino also said that next year’s budget would “focus on our desire that rice to be cooked in the Philippines will be planted, harvested and sold here” as this would also help provide livelihood to the poor farmers in the countryside.

He said the Department of Agriculture’s P53.3 billion for next year was more than 50 percent bigger than the present budget in order to achieve a rice production of 18.57 million metric tons for 2012.

“What’s good here is that the (rice) funds would remain here in the Philippines to further boost the economy instead of the funds going to other countries and enrich them,” he said.

Mr. Aquino said he had directed the Cabinet economic development cluster to come up with a system which would reward agencies able to implement their programs and projects, and penalize those that squander funds.

“I would like to stress that it’s not the swiftness of the spending that we are measuring but the actual results of spending; from the kilometers of road that need to be paved to the quality of livelihood of  the communities,” he said.