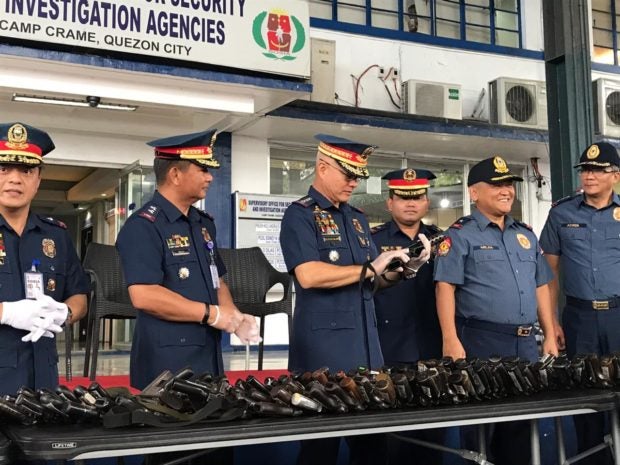 Of the total number, 250 unlicensed firearms were confiscated from security agencies facing cease to operate order while 81 guns were confiscated on inspections during election period from Jan. 13, 2019, to May 8, 2019.

In a press conference, PNP’s Supervisory Office on Security and Investigation Agencies (SOSIA) reported that this accomplishment showed the law enforcers’ preparation for the May midterm polls.

“By implementing cease to operate and post to post inspection, this is our contribution for the preparations of the midterm elections,” Police Brig. Gen. Noli Romana, director of SOSIA, said.

Romana also assured the public that they would be monitoring security guards that are being used by “unscrupulous politicians as bodyguards.” /jpv

Read Next
Man claiming to be ‘Bikoy’ linked Aquino to drugs – Sotto
EDITORS' PICK
PH COVID-19 cases near 19K mark, as recoveries breach 4,000
Cherry Mobile teams up with Cloud Panda PH, launches online store
Año vows intensified anti-drug campaign as lockdown eases
South Korea clamps down again as virus rebounds
Senate probe on status of PH internet connectivity amid ‘skyrocketing’ demand pushed
Leveling up your ‘lutong bahay’ with the kitchen companion you never knew you needed
MOST READ
Calida ‘just the lawyer, not the client’ and must ‘never lose his cool’ – Macalintal
7 members of nurse’s family in Laguna catch COVID-19
PH COVID-19 cases near 19K mark, as recoveries breach 4,000
Amid protests, Trump talks of war — and reelection
Don't miss out on the latest news and information.