US ‘sex slave’ guru goes on trial in New York 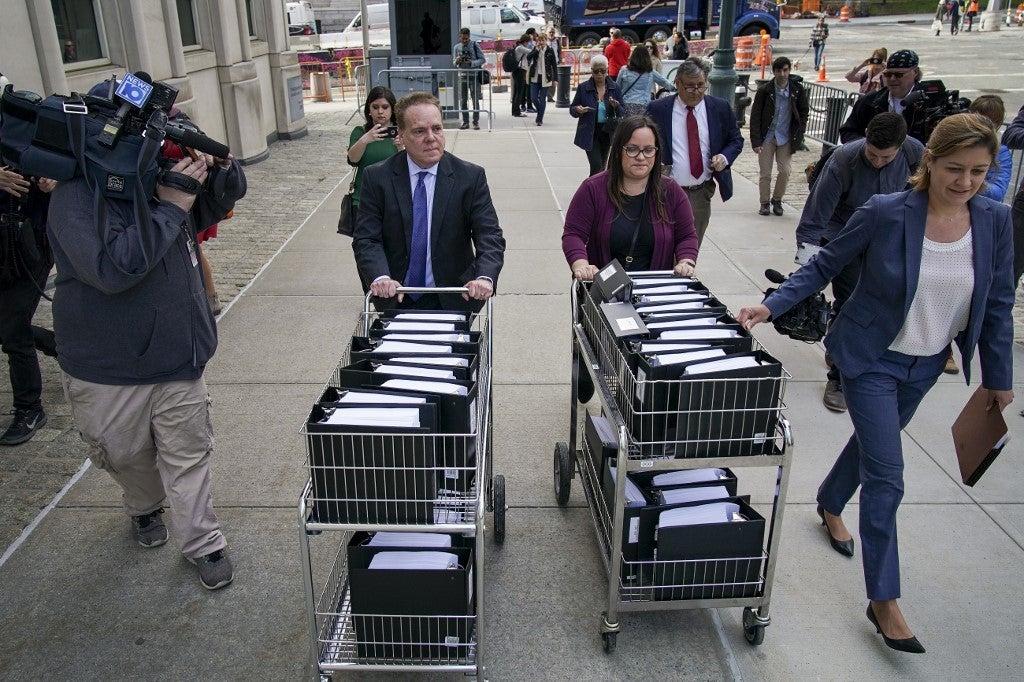 Led by John Marzulli (center, left), Public Information Officer for the U.S. Attorneys Office of the Eastern District of New York, staff and members of the prosecution team push carts full of court documents related to the U.S. v. Keith Raniere case as they arrive at the U.S. District Court for the Eastern District of New York a, May 7, 2019, in the Brooklyn borough of New York City. Opening arguments begin on Tuesday morning for the trial of Keith Raniere, the leader of the alleged sex cult NXIVM. Raniere, who could potentially face life in prison, has pleaded not guilty to sex trafficking, racketeering and other charges. AFP

An American “self-help” guru who allegedly ran a cult-like society of women sex slaves has gone on trial in Brooklyn, and some of his former female supporters were the first to take the stand.

Six people had been due to appear in the dock, but 58-year-old Keith Raniere will now be the only one to stand trial. He faces a host of federal charges, including sex trafficking, extortion and conspiracy.

The other five — all women who held management positions in various organizations headed by Raniere, including actress Allison Mack — have pleaded guilty one by one and avoided going on trial.

Raniere was the leader of Nxivm, a purported life coaching group that prosecutors say instead extorted money from followers and enabled the accused to sexually exploit female devotees.

Over the course of two decades, more than 16,000 people took at least one of Raniere’s “self-help” workshops, which promised to develop a student’s “human potential” — to the tune of $5,000 for a five-day course.

Many who signed up quickly became indebted and ended up having to work for Nxivm (pronounced Nexium) to pay for their courses.

“He was a mentor, but he was a predator,” federal prosecutor Tanya Hajjar said in her opening statement.

“He was a leader of a criminal organization.”

Raniere once sported sleek long hair, beard and circular glasses — in almost Christ-like fashion — but on Tuesday, he appeared in court with his head shaved.

The defendant was visibly relaxed — even smiling — and taking copious notes during the proceedings.

From the beginning, Raniere — who asked followers to call him “Vanguard” — is believed to have had a circle of 15 to 20 women under his influence, with whom he had sex at will.

One may have been only 15 years old when she joined the group’s inner sanctum.

Based in Albany, the state capital of New York, the organization had centers in several cities across the United States, Canada, Mexico and other Central American countries. It has now been disbanded.

As with many cult-like groups, everything rested on the powerful psychological influence of Raniere, who allegedly used a mixture of pseudo-philosophical teachings, attention to his female subjects and humiliation to assert control.

The charismatic Nxivm leader demanded that the women follow an extremely low-calorie diet.

In 2015, Raniere created a secretive pyramid organization within the group known as DOS, which included “slaves” and “masters.”

All members were women except for Raniere, who remained atop the pyramid.

Among the duties of the “slaves” was to have sex with Raniere, who was also called the “Grand Master.”

Before being accepted as “slaves,” the women had to provide compromising photos, letters and other documents that the organization could make public if they left DOS.

Some women were branded, Raniere’s initials seared into their flesh with a cauterizing pen as other members held them down. Each ceremony was filmed.

“This was organized crime and Keith Raniere was the crime boss,” Hajjar told the court.

If convicted, he could face life in prison. He has pleaded not guilty to all charges.

“I’m going to defend his intentions… his good faith to my last breath in this courtroom,” Agnifilo said.

“The true issue is not the control. The issue is the intent.”

The first witness called to the stand was a British woman in her 30s identified only as Sylvie.

She recounted her time at Nxivm, especially how she was manipulated by Raniere and his close aide Clare Bronfman, the heiress to the Seagram liquor fortune who has already pleaded guilty.

She said they were trying to help her grow as a person, but systematically tore her down. She eventually became a “slave” within DOS, at the mercy of “mistress” Monica, but also Raniere.

Sylvie was due to testify further on Wednesday.

Among others who could testify against Raniere during a trial expected to last six weeks is Mack, who once starred on the television drama “Smallville,” and Bronfman.

Both have pleaded guilty in the case and face lengthy prison terms.

Their cooperation in the case, along with that of the other three co-defendants, and possible testimony means more could be revealed about Nxivm’s inner workings.

Prosecutors have not yet publicly disclosed their list of witnesses but on Tuesday, Hajjar hinted that several of Raniere’s closest confidantes could take the stand. /cbb