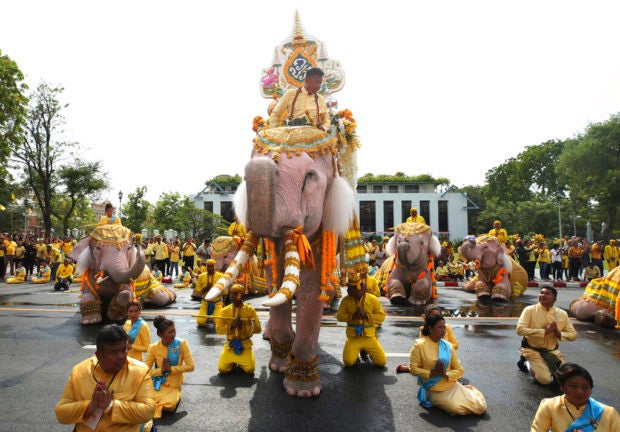 Handlers, known as Mahouts, lead a procession of 10 elephants to kneel outside the Grand Palace in honor of Thailand’s King Maha Vajiralongkorn following his coronation ceremony in Bangkok, Thailand on May 7, 2019. AP

Hundreds of mahouts, or handlers, dressed in royal yellow sang the royal anthem and kneeled with their elephants before a portrait of King Maha Vajiralongkorn. The ceremony followed a celebration a day earlier in which thousands of Thais watched and cheered as the king and his family waved from a palace balcony.

The elephants, which came from across the country, trumpeted at the end of the ceremony. They also posed for group photos.

“I am delighted for His Majesty that everyone shows their respect to him, even the elephants showed their respect for him. And they did it so well,” said Phuraporn Gorgerd, one of those attending the event.

Thais consider white elephants a sacred symbol of royal power, and an elephant adorned the national flag until 1917. The elephants are not entirely white, and are sometimes painted to look lighter colored than their natural patchy color.

Vajiralongkorn took the throne after the 2016 death of his father, King Bhumibol Adulyadej, who reigned for seven decades. /ee