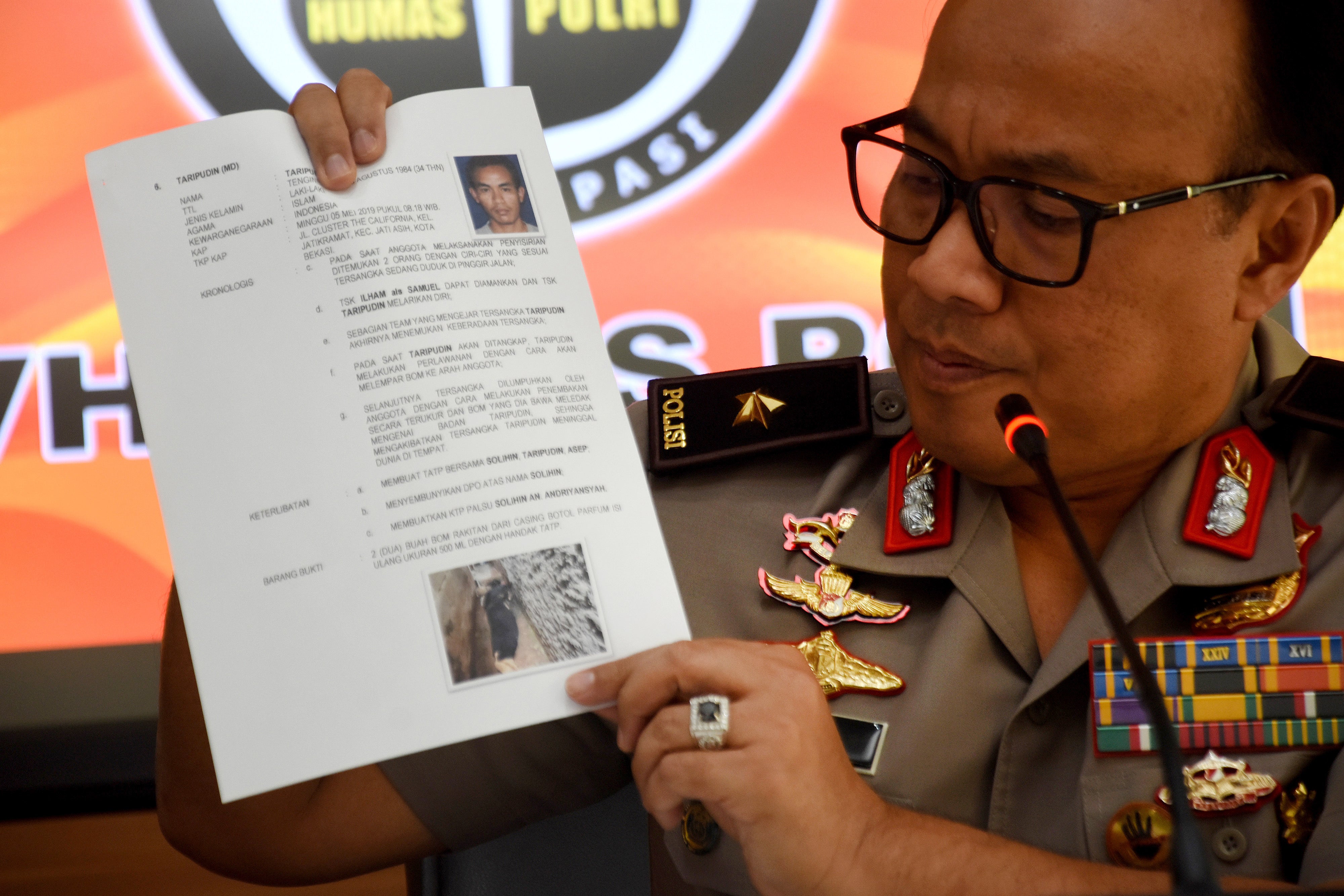 This picture taken on May 6, 2019 shows an Indonesian police officer displaying a photo of a suspected militant during a press conference in Jakarta. – Indonesia has thwarted a bid by a Islamic State-linked militants to stage a series of bombings when it announces official election results this month, authorities said on May 6. (Photo by Nalendra / AFP)

JAKARTA — Indonesia has thwarted a bid by Islamic State-linked militants to stage a series of bombings when it announces official election results this month, authorities said.

Police in the Southeast Asian nation said Monday that they had arrested eight suspects at several locations over the past week, including in Sumatra and near the capital Jakarta.

The roundup comes after IS-inspired Easter suicide bombings killed 257 in Sri Lanka, and as Indonesia marks the anniversary of its worst terror attack in years, which saw a dozen killed at churches targeted by Islamist suicide bombers last May.

Authorities said the arrested militants were members of Jemaah Anshurat Daulah (JAD), a local extremist group that has pledged allegiance to IS and was blamed for last year’s church bombings.

The group planned to set off bombs at various locations when the world’s biggest Muslim majority nation releases election results on May 22.

There are concerns about street demonstrations after presidential challenger Prabowo Subianto, a retired military general, warned protests could erupt over his allegations of massive electoral fraud.

Subianto has vowed to challenge the official results if they confirm that his rival, President Joko Widodo, won a second term.

National police spokesman Dedi Prasetyo said the terror cell planned to target police stations and take advantage of any chaos before or after the poll results are confirmed.

“They have two goals — the first is to target police officers and the second is to exploit election momentum,” he said.

Last year, two families carried out bombings at churches in Indonesia’s second-biggest city Surabaya, killing a dozen people and children of the attackers, including two young girls. It was Indonesia’s worst terror attack in years.

Since the 2002 Bali bombings, which killed over 200 people including scores of tourists, Indonesia has seen a string of deadly attacks that have tested its long-held reputation for religious tolerance.

In March, police said they had uncovered a huge stash of explosives linked to a JAD terror suspect whose wife blew up herself and a child following a dramatic standoff at their home.

The discovery of some 300 kilograms (660 pounds) of assembled explosives and bomb-making materials had raised fears that a major attack was being planned ahead of last month’s elections. /muf