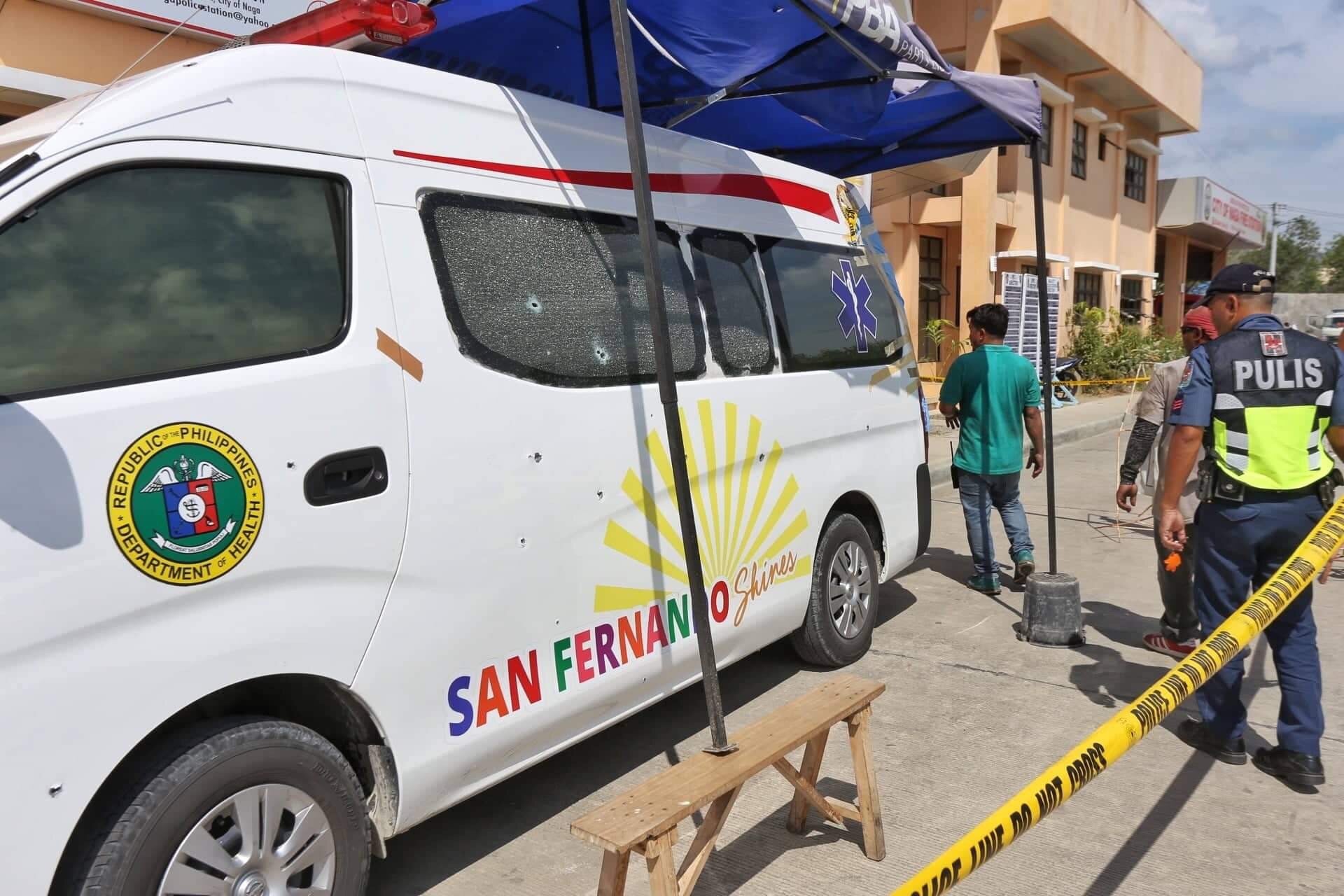 Politics was eyed as the motive in the strafing of an ambulance loaded by supporters of San Fernando Mayor Lakambini Reluya in Naga City on Monday night.

Police Brigadier General Debold Sinas, director of the Police Regional Office in Central Visayas, instructed investigators to look closely into the incident and to identify the perpetrators.

“I instructed the provincial police and the chief of the Naga Police Station to investigate the case properly, and to identify the suspects,” Sinas said in an interview.

Unidentified men ambushed an ambulance owned by the local government of San Fernando town in Naga City, Cebu past 10 p.m. on Monday, May 6.

The ambush took place when the ambulance reached the boundary of Naga City and San Fernando.

(The ambulance was shot at. According to the ambulance driver, he saw a white van and it seemed like one person shot their vehicle)

The ambulance has four passengers, including the driver. They were Harold Ballermo, Arman Navarro, Janice Rosal, and Rosaly Cajes—all residents of San Fernando.

“No one died in the incident, but one of the passengers (Navarro) in the ambulance was wounded,” Villamater said.

He said they had yet to identify the motive behind the ambush.

Reports said that the ambulance passengers were supporters of Reluya.

“We still cannot conclude if it is related to the election. It’s difficult to assume. But we are not discounting it,” added Villamater.

The Inquirer tried to contact Reluya through the phone but she could not be reached for a statement.

Last January, Reluya together with her two bodyguards survived an ambush in Talisay City.

Her husband, Ricardo, and two other staff members, however, died in the incident.

Sinas said he would send additional troops to San Fernando to maintain the peace and order situation in the municipality during the elections.

San Fernando, located about 38 kilometers south of Cebu City, was placed under the orange category of the election watchlist areas. It means that there has been an intense political rivalry in the area and that armed men were present.

Its vice mayor is Fralz whose brother, self-confessed drug lord Franz Sabalones, was killed in Manila earlier this month.

Sinas directed the provincial police to conduct checkpoints in San Fernando and to make sure that no shooting incidents will happen again.

“They have to conduct checkpoints not only in the highways and main roads but also at roads leading to mountain barangays,” he said.