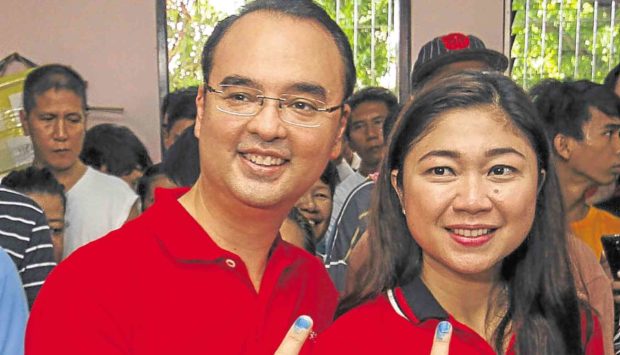 MANILA, Philippines — The Cayetanos have served Taguig City “with all honesty” and with credible qualifications, former Foreign Affairs secretary Alan Peter Cayetano said Tuesday as he welcomed the rejection of the disqualification case against him and his wife Lani.

“Una, salamat sa Diyos that it came out before elections and it’s very positive. We were always confident nung legal. Walang illegal o immoral sa ginawa namin,” Cayetano said in an interview at the House of Representatives.

“Tanggalin mo ‘yung Cayetano, are we not both qualified? Have we not both served Taguig with all honesty? Kami ba may kasalanan sa bayan, di ba?” he added.

Cayetano is seeking the congressional seat for Taguig’s first district, while Lani, the city’s incumbent mayor, is running as a representative of the second district on May 13.

In November 2018, Leonides Buac questioned the claim of Cayetano that he was a resident of Barangay Bagumbayan in the city’s first district, while his wife Lani lives in Barangay Fort Bonifacio in the second district, saying that it was not in accordance with Article 69 of the Family Code.

But the Commission on Elections (Comelec) sided with the couple and said the former senator “cannot be considered to have lost his domicile at Bagumbayan by the mere assertion that his wife transferred her domicile to Two Serendra.”

“A person may live and maintain residences in different places but it does not result [in] loss of domicile,” the resolution stated.

The former lawmaker again said the petition was “just made a tool” by their political opponents in the national and local levels.

Cayetano confident Comelec will junk petition vs him, wife