Police find body in Cyprus lake, tie rape to killings of 4 Filipinas, 3 others 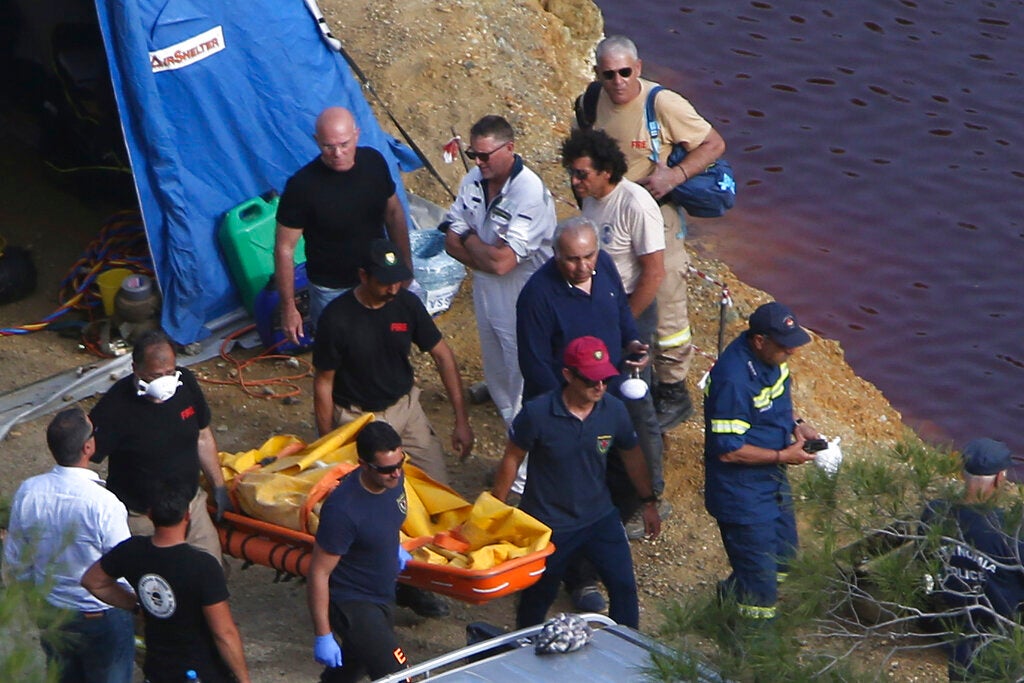 Cyprus Special Disaster Response Unit carry a suitcase after it was retrieved from a man-made lake near the village of Mitsero outside of the capital Nicosia, Cyprus, Sunday, May 5, 2019. Cyprus police spokesman Andreas Angelides says investigators hunting for bodies dumped by a suspected serial killer pulled a suitcase containing decomposing human remains from a toxic lake. (AP)

NICOSIA, Cyprus — Police in Cyprus recovered a second suitcase containing human remains Sunday from a contaminated lake where a military officer who confessed to killing seven foreign women and girls told authorities he dumped the bodies of three victims.

The lake is part of an abandoned copper pyrite mine where a woman’s body was found by chance last month in a flooded shaft, setting off an investigation that police say led to the island nation’s first known serial killer.

The 35-year-old army captain told investigators he killed five women and two girls, and disposed of three bodies — those of a Filipino woman and a Romanian mother and daughter — in the man-made lake. A suitcase with the remains of a woman was found at the bottom a week ago.

Several hundred people gathered at the site Sunday to light candles and lay flowers in memory of the two first victims, both of whom were from the Philippines. Some wept as tributes to the two victims were read.

A coroner will examine the remains found Sunday to try to identify the victim, police spokesman Andreas Angelides said. Divers are scouring the lake bottom with a sophisticated sonar device for another suitcase, Fire Service Chief Marcos Trangolas said.

The search for bodies and evidence started weeks ago in a case that has shocked the eastern Mediterranean island nation, brought allegations of police negligence, and cost the country’s justice minister and the police chief their jobs.

Police have been accused of failing to properly investigate when a victim was reported missing 2½ years ago, allowing the suspect to keep killing. Several of the women were reported as missing to police.

Earlier Sunday, Criminal Investigation Department Chief Neophytos Shailos told a court in Nicosia that the suspect allegedly raped a woman in early 2017 after he picked her up in his car, saying he wanted to give her the photographs he took. Shailos said the suspect recorded video on his cellphone.

The woman, a 19-year-old foreign citizen, called the suspect’s wife at the time and told her what had happened, Shailos said. He did not elaborate on what the suspect’s wife did with that information. The couple, who have two children, are now divorced.

Shailos said investigators are trying to secure additional testimony from a female friend of the alleged victim, who has since left the island. He did not state her nationality.

The court on Sunday extended the suspect’s detention for another eight days. He has not been named because he has not yet been charged in what authorities are calling the most horrifying multiple-slayings case that Cyprus has seen.

The suspect, who represented himself in court Sunday and wore a bulletproof vest, said he had no objections to the detention renewal.

Investigators have been speaking with everyone the suspect had contacted online since 2016, when the alleged first victims vanished: Livia Florentina Bunea, 36, from Romania; and her 8-year-old daughter, Elena Natalia Bunea.

Only two of the victims have so far been positively identified; 38-year-old Mary Rose Tiburcio and Arian Palanas Lozano, 28, both from the Philippines. Their bodies were discovered in an abandoned mineshaft last month six days apart.

Authorities are also looking for the body of Tiburcio’s 6-year-old daughter Sierra in another reservoir. The decomposed remains of a woman who is believed to be Ashita Khadka Bista, from Nepal, were found at the bottom of a pit in a military firing range after the suspect led investigators there.

Cyprus President Nicos Anastasiades, who on Saturday called the suspect a “serial killer,” last week apologized to diplomats of the countries of the victims and vowed to bolster protections for foreign workers in Cyprus.

Critics claim the police in Cyprus did not put much energy into the missing persons reports because the victims were low-paid foreign workers.