Palace to ‘Bikoy’: You lie in one, you lie in all | Inquirer News
Close
menu
search

Palace to ‘Bikoy’: You lie in one, you lie in all 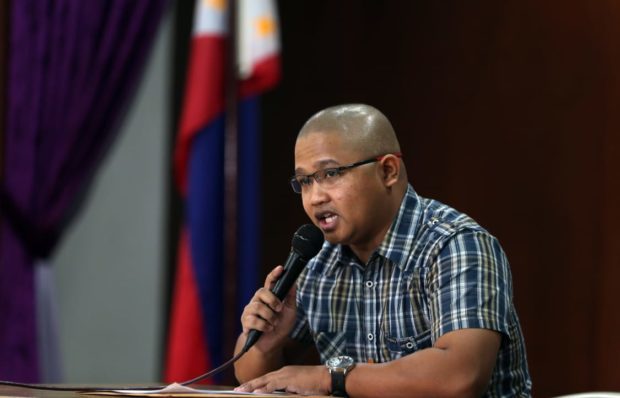 MANILA, Philippines — Malacañang on Monday remained unfazed as it questioned the credibility of “Bikoy,” the hooded narrator in videos linking President Rodrigo Duterte and his immediate family to the illegal drug trade.

Peter Joemel Advincula, who claims to be Bikoy, surfaced on Monday at the Integrated Bar of the Philippines (IBP) office in Pasig City to request legal assistance as he seeks to submit an affidavit and file charges against the individuals he had linked to the drug syndicate in his “Ang Totoong Narcolist” videos.

“The saga of the black propaganda that is ‘Ang Totoong Narcolist’ against the President and the First Family continues,” presidential spokesperson Salvador Panelo said in a statement.

Panelo warned the certain IBP officers that they might have “unwittingly allowed their facilities to be used by a fraudster to perpetuate lies and foist accusations” against the first family and those closely identified with the President Rodrigo Duterte.

Panelo said Advincula no longer had a credibility, his claims having been debunked.

“The incredibility as well as the absurdity of Bikoy’s allegations have already been shed,” he said.

In his videos, Advincula accused the President’s trusted aide, Christopher “Bong” Go, of having a dragon tattoo on his back, which would link him to the illegal drug trade.

In separate occasions, Go had bared his back to prove that he had no tattoo.

“Significantly, the tattoo that Bikoy claimed was on the back of former Special Assistant to the President Christopher Lawrence “Bong” Go was also proven false when the latter removed his shirt and bore his back for the public to see the falsity of the claim,” Panelo said.

The Rural Bank of Guinobatan in Albay also denied the existence of bank accounts mentioned in the videos.

“There is a dictum in law which says: You lie in one, you lie in all. This legal principle applies to Advincula or Bikoy,” Panelo said.

“It appears that he has been incarcerated in 2012 for conviction of illegal recruitment and large scale estafa, as well as for theft. Presently, there are news that he is facing multiple criminal cases like estafa, among others. These crimes involve moral turpitude that goes to the very integrity and credibility of Advincula or Bikoy,” he said.

He added the PNP was “still unearthing information that will further bolster the fraud perpetrated by this unscrupulous person.”

“There are strong indications that Advincula is not alone but is just being used by a personality in conspiracy with others bent on destroying the reputation of the Duterte family and tarnishing the image of the President,” Panelo said.

He said that Advincula’s “pretended fear for his life is part of the fraudulent act.”

“Soon the pretenders and blackmailers will be unmasked,” he said.

He then assured the public that “this administration has committed, and continues to commit itself, to the protection and preservation of the safety and general welfare of the Filipino people, as well as their right to seek redress from the government.”

“This includes the protection of those who may seek to maliciously malign the government and its officials who are under threat, imagined or real. They shall not however be exempted from criminal prosecution for crimes they may have committed,” he said.