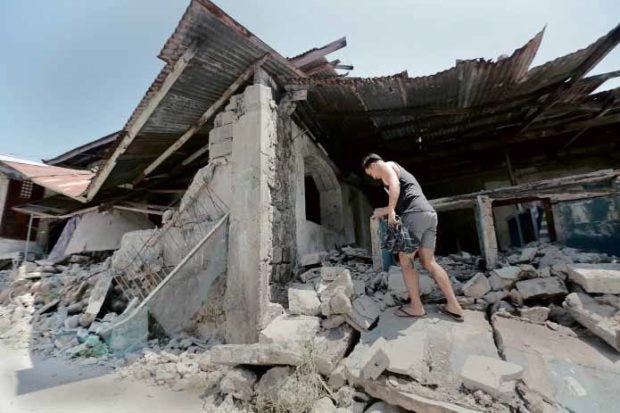 CALL FOR FAULT MAPPING A resident of Porac, Pampanga province, inspects a house damaged by the 6.1-magnitude earthquake that struck the town on April 22. —GRIG C. MONTEGRANDE

MANILA, Philippines — Mikee Nazal was at home, watching television on a late Monday afternoon, when she suddenly felt like being on a “raft floating on water.”

“The nearest table was too far so I just did the ‘duck, cover and hold,’” the graduate student said. “The lights flickered, but the television was still on… I was sitting on the floor, that’s why I felt the earthquake right away.”

The April 22 quake, recorded at 6.1 magnitude, originated in the mountains between Zambales and Pampanga provinces, but was strong enough to jolt many parts of Metro Manila, some 170 kilometers away.

As soon as it was safe, Nazal immediately thought of updating the contents of her “go-bag,” a kit that contains personal emergency supplies needed to survive for at least 72 hours once disaster strikes.

Now her bag carries two sets of clothes, two bottles of water, a first-aid kit with basic medicine, a powerbank with a built-in flashlight and some snacks that won’t spoil easily.

“Now I know we should all have that ‘evacuation-scenario’ in mind,” she said. “Earthquakes don’t care about our schedules… I think the best way to prepare is not to think you’re prepared enough.”

While awareness on disaster preparedness has increased through the years, not all Filipinos may have the same readiness mindset.

When it comes to earthquakes, which cannot be predicted and may strike anytime, learning the hazards that come with temblors would reduce damage and save lives.

“You die from an earthquake because of the hazards,” said Mahar Lagmay, executive director of the University of the Philippines Resilience Institute.

“For example, when the ground shakes or ruptures, and the building collapses and you get trapped or something falls on your head.”

Other hazards, such as landslides, tsunamis and fires, may be triggered by a destructive quake, Lagmay said.

Hazard maps become valuable in the face of constant threats in a disaster-prone country.

Even before a quake takes place, residents should be aware of the fault lines nearest their homes or places of work, Lagmay said.

They should also identify their designated evacuation areas, where they could meet family members in case they get separated.

Under the National Building Code, experts said, structures that are faithfully compliant may withstand an earthquake of Intensity 8, or a “very destructive” quake, based on the intensity scale of the Philippine Institute of Volcanology and Seismology (Phivolcs).

For Metro Manila residents, the West Valley Fault is the closest, running 100 km on its eastern side, from Bulacan province and cities in the metropolis (Marikina, Pasig, Makati, Taguig and Muntinlupa) to Laguna and Cavite provinces.

Phivolcs has created a FaultFinder website for residents to check the faults closest to their location.

“If a fault moves, it will split apart,” Lagmay said. “These movements are very powerful [that] they can generate a booming sound. Such were the accounts in Bohol province [in 2013] and even during the earthquake on April 22.”

Phivolcs has recommended avoiding construction within 5 meters on each side of a fault trace, or a 10-meter wide “no-build zone.”

The agency earlier reported that more than 3,200 structures, including residential and commercial establishments, were built along the West Valley Fault and thus in danger of ground rupture should a major earthquake strike.

Lagmay said structures built on top of faults should be relocated by local government units.

He noted that structures on top of faults in other countries, which experienced destructive earthquakes, suffered the most damage.

Continuous fault mapping should be rigorously conducted to equip local governments with the knowledge of the faults in their respective jurisdictions, he said.

Geologists have discovered that the recent Zambales quake was generated by a previously unknown fault.

“In Bohol, the only mapped fault there is the Eastern Bohol fault, which was down south of the island, but the earthquake happened north of Bohol,” Lagmay said.

“If identified prior to the 2013 earthquake, the local government could have prepared for the hazards,” he added.

Aside from ground rupture and building collapse, Metro Manila is under threat from tsunami, once a major earthquake originates from the movement of the underwater Manila Trench, west of Luzon.

Lagmay said it would take about an hour for the tsunami to reach Manila’s coastline. “The inland extent of inundation can reach up to three kilometers,” he said.

Those who would be affected should find either a safe evacuation place or a vertical evacuation area when the tsunami arrives, according to Lagmay.

Given these hazards, the public should make use of hazard maps that are available on the Phivolcs website, he said.

“The hazard threat is constant and therefore, to properly address that threat, we need to constantly prepare,” Lagmay added.

The country should also gear itself up for the disruption that may happen once disasters strike, civil engineer Benito Pacheco said.

Not only businesses or schools or office work may be disrupted, but also the delivery of social services, transportation and communication—all crucial in the event of disasters, be they earthquakes or floods.

Pacheco said it was important to be “risk conscious,” or to be aware of the hazards and our different levels of exposures to these.

“When we become conscious, we don’t blame anyone else, but ourselves,” he said.