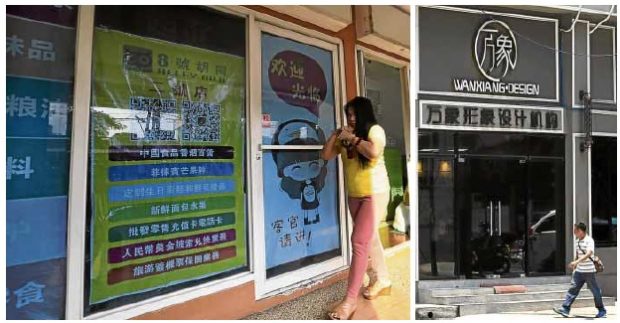 THESE SHOPS ARE NOT IN CHINA Chinese business establishments like this restaurant on the ground floor of Cityland building (left) and barbershop at Osmeña Highway and Gil Puyat Avenue are manned entirely by and cater exclusively to Chinese. —LYN RILLON

MANILA, Philippines — Saying Filipinos should not be discriminated against in their own country, Malacañang on Monday said it would investigate reports that some Chinese restaurants and other Chinese-owned businesses in Metro Manila were catering exclusively to Chinese nationals.

Presidential spokesperson Salvador Panelo told reporters that the Department of Labor and Employment would first look into the reports before acting on the recommendation of Sen. Panfilo Lacson to the government to shut down the offending Chinese businesses.

Lacson, in a radio interview on Sunday, complained about Chinese restaurants and other businesses that served only Chinese working in online gaming companies in southern Metro Manila.

Not in small businesses

He called on the Department of Trade and Industry (DTI), local governments and other government agencies to use their authority to keep Chinese investors out of small-and medium-sized enterprises, where Filipinos with limited capital invest and which serve as the backbone of the Philippine economy.

Before Lacson’s interview, businessmen in Boracay complained about a sudden increase in the number of Chinese restaurants operating along the main road on the world-famous resort island.

The restaurants’ staff — cooks, waiters, laborers and even drivers — are Chinese and their menus are written in Chinese.

They serve only Chinese who come on group tours to the island.

Panelo told a news briefing on Monday that the Palace would ask Labor Secretary Silvestre Bello III to look into Lacson’s report.

“We have to investigate that … We cannot allow that to happen. They cannot be discriminating against Filipinos. It’s a public business and therefore should cater to all,” Panelo said.

He said the Palace would also ask Trade Secretary Ramon Lopez to look into complaints that Chinese investors were competing with Filipinos in small- and medium-sized enterprises.

Lacson also asked the DTI, labor department and immigration bureau to look where the Chinese had made investments in the country.

He said the government should make sure the Chinese investors were engaged only in private enterprises that needed huge capital, not small businesses from which Filipinos derived their livelihood.

Panelo urged the public to file complaints if they had been refused service at Chinese restaurants or if they felt those businesses had broken Philippine laws.

“The better step or thing to do is to file a complaint. You engage with the owner or try to force [them to serve you], you will only trigger a fight,” he said.

Malacañang also urged local governments to look into reports of Chinese businesses exclusively catering to Chinese nationals and if they found the reports to be true, shut down those establishments.

“The [local governments] should do their job,” Panelo said.

Sen. Aquilino Pimentel III on Monday said those businesses should be shuttered.

“Limiting customers to Chinese people only is a form of discrimination,” Pimentel said.

“Close them down for violating the Constitution,” he said.

Sen. Joel Villanueva, head of the Senate labor committee that investigated the influx of Chinese workers into the Philippines, said the DTI should look into the reports of Chinese-only businesses operating in the country.

“The Department of Trade and Industry should [monitor] the existence of these establishments and ensure they adhere [to] prevailing laws and regulations,” Villanueva said.

The influx of Chinese workers into the Philippines began in 2016, after China pledged billions of dollars in aid and investment to help President Duterte develop his ambitious infrastructure program.

Entering the country as tourists, the Chinese overstay their visas and end up working in Chinese-operated online gaming companies, Chinese-funded infrastructure projects, and Chinese-owned businesses, including restaurants and barbershops.

The labor department and the immigration bureau, working with other government agencies, have adopted a stricter policy to end abuse of special work permits and halt the traffic of illegal workers from China.