Michael Cohen, Trump’s one-time aide who turned on him, goes to jail 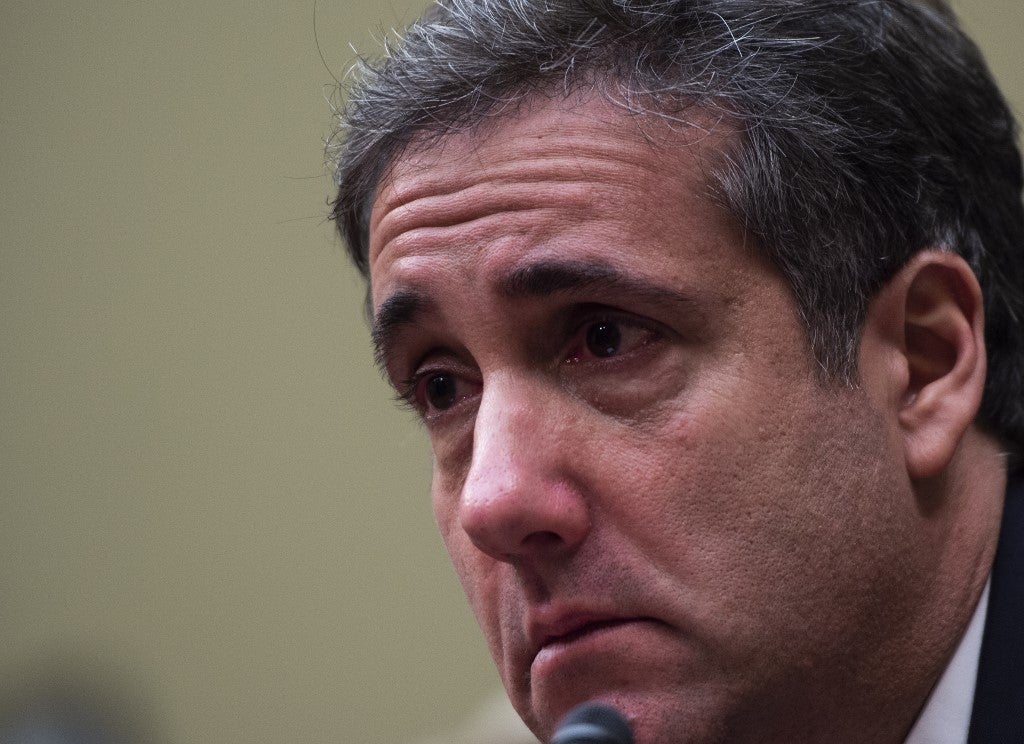 In this file photo taken on February 27, 2019, Michael Cohen, US President Donald Trump’s former personal attorney, testifies before the House Oversight and Reform Committee in the Rayburn House Office Building on Capitol Hill in Washington, DC. After dramatic appeals and testimony in Congress, Cohen is due to report to jail May 5, 2019, to serve a three-year sentence he deems unjust because he was simply following his boss’s orders. AFP

NEW YORK, United States – After dramatic appeals and testimony in Congress, Donald Trump’s one-time personal lawyer Michael Cohen is due to report to jail Monday to serve a sentence he deems unjust because he was simply following his boss’s orders.

The longtime Trump admirer who once said he was ready to “take a bullet” for Trump is awaited at the federal prison in Otisville, New York by 2:00 pm (1800 GMT).

He was sentenced to three years in prison in December, after admitting to having paid hush money during the 2016 election to two women who said they had had affairs with Trump — in violation of electoral laws — having committed tax fraud, and having lied to Congress.

The father of two children in their twenties, Cohen had hoped until the last moment that his sentence would be reduced, offering information to investigators that could compromise Trump and his family, including over the Russia investigation.

But even if Special Counsel Robert Mueller referred to the ex-attorney more than a hundred times in his report on Russian meddling in the US elections, prosecutors have not budged on Cohen’s sentence.

The child of a Holocaust survivor and a nurse will become one of just two close aides of the president jailed for a lengthy period of time after Paul Manafort, Trump’s ex-campaign manager who was sentenced to 7.5 years of prison.

Cohen worked for the Trump Organization for a decade and insists that all reprehensible acts took place at the behest of the president, who the ex-attorney claims would be ready to cling to power even if he loses his bid for a second term in 2020.

“How come I’m the only one?” Cohen asked in an interview with The New Yorker.

For the American president and his allies, Cohen’s prison sentence has the taste of payback after the one-time attorney turned on his boss.

Trump called him “weak” and a “rat” ready to make up any lies necessary to avoid prison.

Cohen, who has been disbarred and is running out of cash, has not said his last word.

This weekend, he told reporters following him in Manhattan as he spent his last moments of freedom with his son Jake, a student in Miami, that he would make some final statements Monday before going behind bars.

When he spoke to lawmakers earlier this year, Cohen mentioned plans to write a book and have his experiences made into a film.

In doing so, he would be following the example of Richard Nixon’s ex-lawyer John Dean, who pleaded guilty for having bought the silence of the Watergate scandal burglars, and then wrote a book about his experience.

The Otisville prison conditions should allow Cohen to spend at least some time on such projects.

He is due to be held in the detention center’s low-security “camp,” which holds detainees who are not considered to be dangerous, including many other white collar criminals.

Practicing Jews who are sentenced often request to be placed at Otisville because it provides kosher meals and detainees are allowed to follow the Shabbat day of rest.

The 120-some prisoners of this wing of the center can use libraries, as well as basketball and tennis courts while wearing their beige uniforms.

Can Cohen hope for an expedited release for good behavior?

“Because Congress eliminated parole in 1987, the best he can hope for is a 15 percent reduction off his sentence for ‘good behavior,'” said criminal defense attorney Harlan Protass.

“He’ll also likely spend the last six months of his sentence in a halfway house, like where former Congressman Anthony Weiner is now.” /cbb