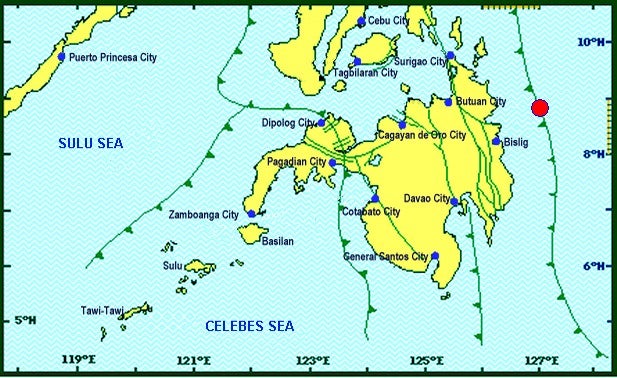 DAVAO CITY — A magnitude 5 quake struck near a town of Surigao del Sur on Sunday morning, the Philippine Institute of Volcanology and Seismology (Phivolcs) said.

No damage was recorded but the state seismology bureau said aftershocks are expected following the temblor that hit at 9:56 a.m. some 81 kilometers southeast of the municipality of Cagwait.

The tectonic quake had a depth of focus of 28 kilometers and there were no reported intensities, which means the tremor was not felt by residents nearest to the epicenter.

A magnitude 4.6 event also struck Marihatag town, also in Surigao del Sur three hours earlier. The tremor’s epicenter was traced at some 80 kilometers southeast to the sea at a depth of 3 kilometers.

The larger event, which occurred at 7:51 a.m., had its epicenter traced some 31 kilometers southeast of Sarangani.

It was followed some 14 minutes later by the second event, with the epicenter located 30 kilometers offshore to the southeast.

The state seismic bureau said the events may indicate two scenarios: the tremors may continue for days and then taper off or may result to a larger quake.

Phivolcs assured the public it is monitoring the events even as it urged communities to take preparedness measures. /je