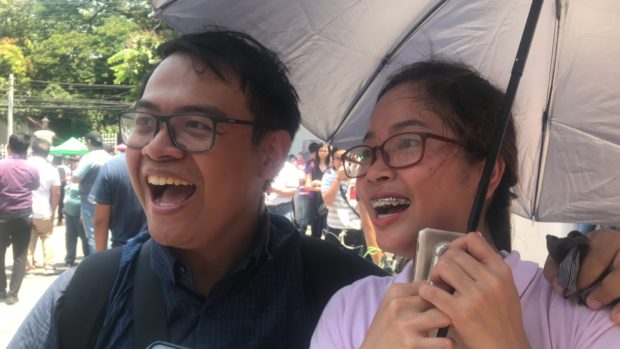 MANILA, Philippines  – Enduring hours of travel from Bicol to Manila, couple Johanna Malang and Jose Epifanio San Jose proceeded  to the Supreme Court (SC) on Friday to “face their fears.”

Both of them took the bar exam in November last year and instead of waiting for the results online, they chose to go to Manila to see for themselves if their names would be among those flashed on the LED wall on the SC front yard.

Apparently, their hours-long travel and  patience under the scorching summer sun was worth it.

They both passed the bar exam.

After passing the bar, they plan to serve in the government.

Malang said she wants to specialize in litigation while San Jose said he wants to focus on data privacy since it is close to his pre-law course – electronics engineering.

Among the tips they shared to pass the bar exams was “you should know yourself.”

She also said that reviewing for and passing the bar is only a “matter of discipline.”

Malang and San Jose was only among those who rejoiced at the release of the bar results.

Happiest moment of his life

One of the first to shout for  joy was Leo Acebedo,  a law graduate from Adamson University.

He couldn’t immediately entertain interviews from reporters as he said he wanted to call his father first to deliver the good news.

It was the happiest moment of his life, he said.

Aside from those who took the bar exams, relatives were also present at the SC to find out whether or not their loved ones made it.

Josephine Dayrit Agustin, burst into tears when she saw her daughter’s name, Nadine Patricia, on the LED wall.

She said she went to the SC alone, without her daughter’s knowledge, to see for herself if her daughter passed the bar.

Meanwhile, for the family of Philippine touchball athlete Ma. Rodelita Dublin, it was a nervous moment because they initially did not see her name in the list of passers.

However, when an updated list of the passers were uploaded, the family started to rejoice because there is a new lawyer in the family.

Dublin herself, a graduate from San Beda Alabang, was not present at the SC grounds.

According to her family, she is in Malaysia, representing the Philippines in the Federation of International Touch World Cup.

WATCH: #Bar2018 passer Maria Rodielita Dublin is currently competing in the Touch Football World Cup in Malaysia when the exam results were released.

For aspiring lawyers, bar passer Arvin Jay Manauis had only one advice.

“Expect the unexpected po, prepare for the worst, para hindi sila magulat,” said Arvin Jay Manauis, #Bar2018 passer from the University of Northern Philippines, after he was asked if he had any advice to give to future bar examinees. | @DYGalvezINQ pic.twitter.com/3gHNtfwWNn

The passers are set to take their oath on June 13. /gsg