MANILA, Philippines – Labor Day demonstrators called for amendments to the Labor Code of the Philippines in order to put an end to contractualization and repeal of tax reform law. 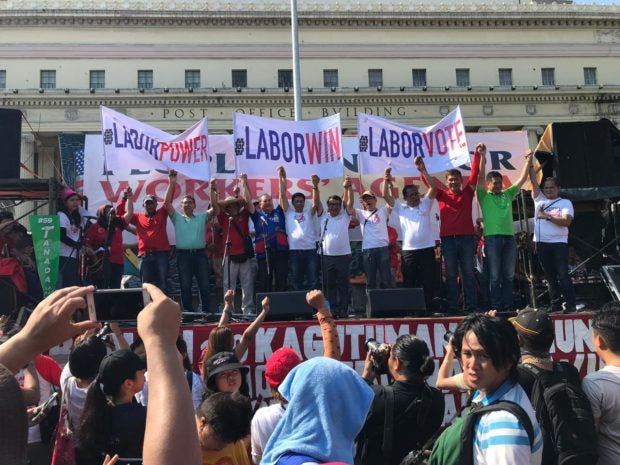 Laborers, labor group leaders and advocates push for pro-labor initiatives in a rally at Liwasang Bonifacio in Manila on Wednesday, May 1, 2019. INQUIRER.NET PHOTO / RYAN LEAGOGO

Labor groups have criticized the  executive order signed by the President exactly one year today, saying it was a mere reiteration of the provisions of the Labor Code.

They were referring to Duterte’s 2018 Executive Order No. 51, aimed at ending the practice of contractualization.

Bukluran ng Manggagawang Pilipino chairman Leody de Guzman said the public was misinformed on the executive order, noting that it legalized contractualization instead of abolishing it.

Diokno likewise asked the government to repeal the Tax Reform for Acceleration and Inclusion (TRAIN) Law which increased prices of goods and services.

The Kabataan Partylist, Kilusang Mayo Uno, Partidong Manggagawa and Federation of Free Workers were among the groups that took part in Wednesday’s Labor Day rallies in Manila.  /gsg