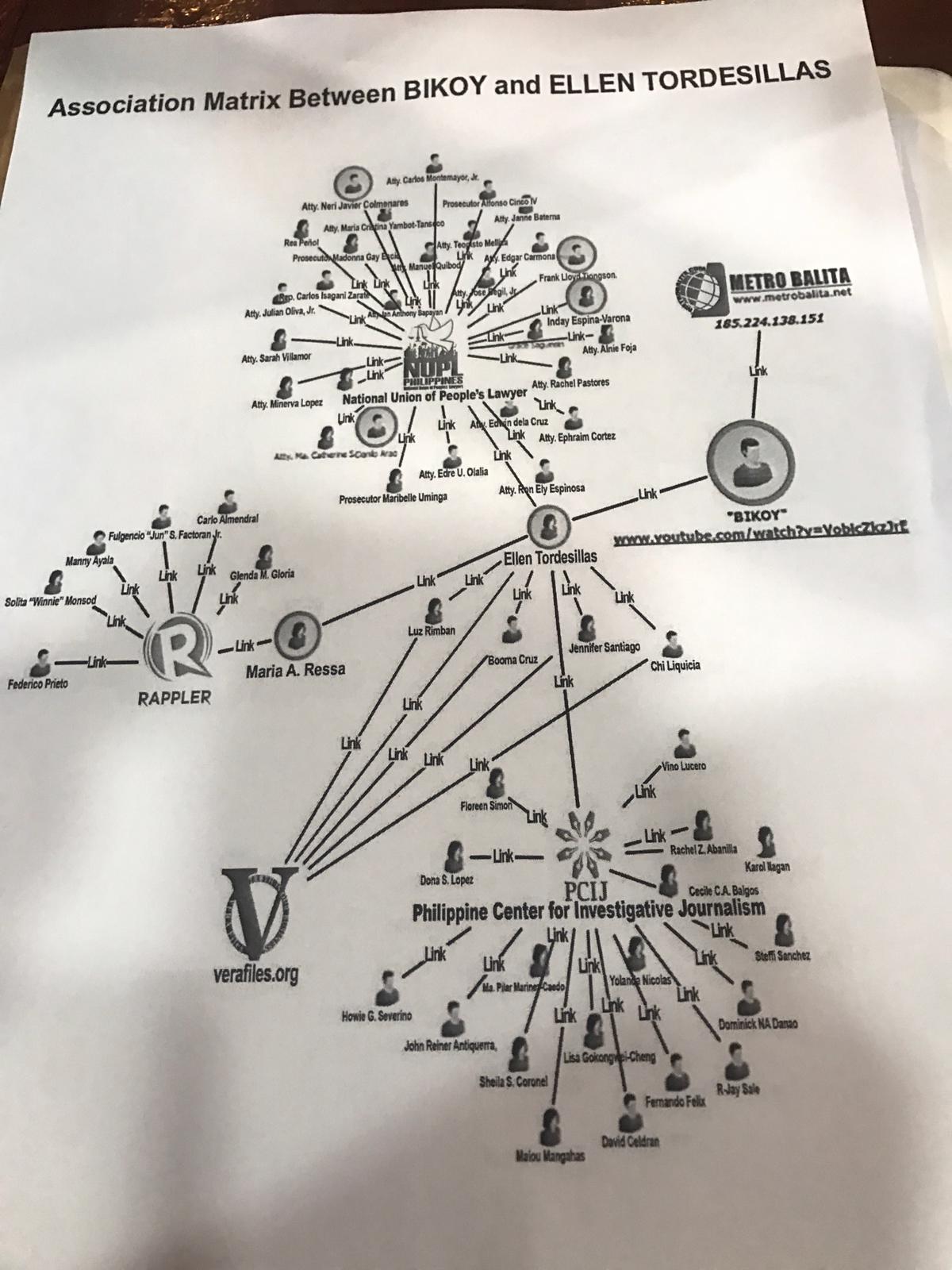 The “Oust Duterte Matrix” presented by Malacañang to the media during a press briefing with Presidential Spokesperson and legal counsel Salvador Panelo on April 22, 2019. The same matrix was published by daily broadsheet Manila Times on the same day. INQUIRER.net/Nestor Corrales

MANILA, Philippines — There is no need for President Rodrigo Duterte to explain his “ouster plot matrix” despite calls from journalists and lawyers tagged in the alleged ouster plan for the Chief Executive to prove their participation.

“Those named in the matrix demand proof of their participation in the ouster plot. Such is totally unnecessary,” Presidential Spokesperson Salvador Panelo said in a statement.

Malacañang released during an April 22 press briefing a matrix, alleging several journalists and pro bono lawyers were conniving to unseat Duterte. This came after The Manila Times published the same matrix, saying it was from “highly placed source” in the Office of the President.

Panelo said the “matrix shows that there is an ouster plot,” adding that “it is just a plot, a plan, an idea.”

“The same is not actionable in court it being just a conspiracy. Conspiracy is not a crime unless the law specifically classifies a particular conspiracy to undertake a project or actualize a plan as a crime,” he said.

The individuals and group named in the matrix have slammed Duterte and Malacañang with the Philippine Center for Investigate Journalism (PCIJ) calling it “wrong on many points.”

Reporters repeatedly asked Panelo during the press conference where the President got his information to draw such matrix. Panelo said only the President knows and that media should believe it because the matrix came from Duterte.

Duterte has previously said he got the information from a foreign source, which he refused to identify.

“It does not conclusively mean however that the information was originally obtained by the foreign country by an unlawful method that violates the privacy of an individual,” Panelo said.

“The information,” he said, “may have been acquired by a Filipino citizen who shared the same to the foreign country which then transmitted to PRRD pursuant to the global policy of intelligence information sharing between countries.”

“It is also erroneous to speculate that the information was obtained through wiretapping or any similar device prohibited by laws as it could have been personally heard or witnessed during a conversation between plotters in a place where there is no reasonable expectation of privacy, which according to jurisprudence is not violative of our privacy laws,” he added.

“The possibilities are endless,” Panelo, who also serves as Duterte’s chief legal counsel, pointed out.

Panelo cited Article 8 of the Revised Penal Code, saying “Conspiracy and proposal to commit felony are punishable only in the cases in which the law specially provides a penalty therefor.”

He said examples of conspiracies, “which need no overt acts but punishable under the Revised Penal Code” are proposals to commit treason, coup d’etat, and rebellion.

“Only when all the elements of any of these crimes have been committed will we file a case against the conspirators. Should their plans lead to overt acts punishable by law then criminal cases will also be filed against them,“ he said.

“It is only when the cases are filed in court that proof will be submitted to substantiate the criminal charges,” he added.

Panelo said “the matrix was disclosed to the public for the ring leaders and their co-plotters to know that we know, to put them on notice that pursuing their plan by committing overt acts punishable by law will open themselves to criminal prosecution.”

He also said: “The revelation on the ouster plot is pursuant to the people’s right to information.”

“The people deserve to know that there are ouster plans against the leadership of their government,“ he said, citing, “Article 3, Section 7 of the Constitution, which says that, “the right of the people to information on matters of public concern shall be recognized.”

“It is therefore the constitutional duty of the administration to report to our countrymen the presence of groups which are motivated to unseat their President whom they have given the mandate to govern,” he added.

While “the critics cry that the move to reveal the ouster plot was meant to stifle political dissent and opposition,” Panelo said “the fact alone that critics and those in the matrix as well as the personalities or groups identified in the matrix are still vigorously voicing their adverse opinions against the administration and even have increased their attacks a notch higher in this election season is eloquent proof that there is no stifling of dissent nor are their freedom to express their thoughts threatened.”

“Compared to all administrations, the dissent during this leadership is the freest. No person has been haled to court on account of the individual’s exercise of the freedom of speech or by reason of one’s disagreement against the Administration or its policies,” he said.

He likewise said “certain individuals are facing charges due to the presence of circumstances and facts giving rise to a reasonable belief that they are probably guilty of the crimes they are charged with but certainly and absolutely unrelated to their being critical of the administration.”