Duterte to Congress: Pass laws on workers’ ‘security of tenure and self-organization’

MANILA, Philippines – President Rodrigo Duterte on Wednesday called on Congress to pass laws that would “fully protect our workers’ rights, especially to security of tenure and self-organization.”

In his Labor Day message, the President hailed the valuable contributions of Filipino workers in the country and abroad in nation-building.

“Our nation’s strength has always depended on the hard work, grit and perseverance of our labor force. Every year, we set aside this day to celebrate their valuable contributions not only in the struggle to provide a better life for our people, but in building the foundations of a more promising future for succeeding generations of Filipinos,” he said.

“Today, we celebrate the working class not as a tool of employers, but as an essential catalyst for our nation’s overall progress,” he added. 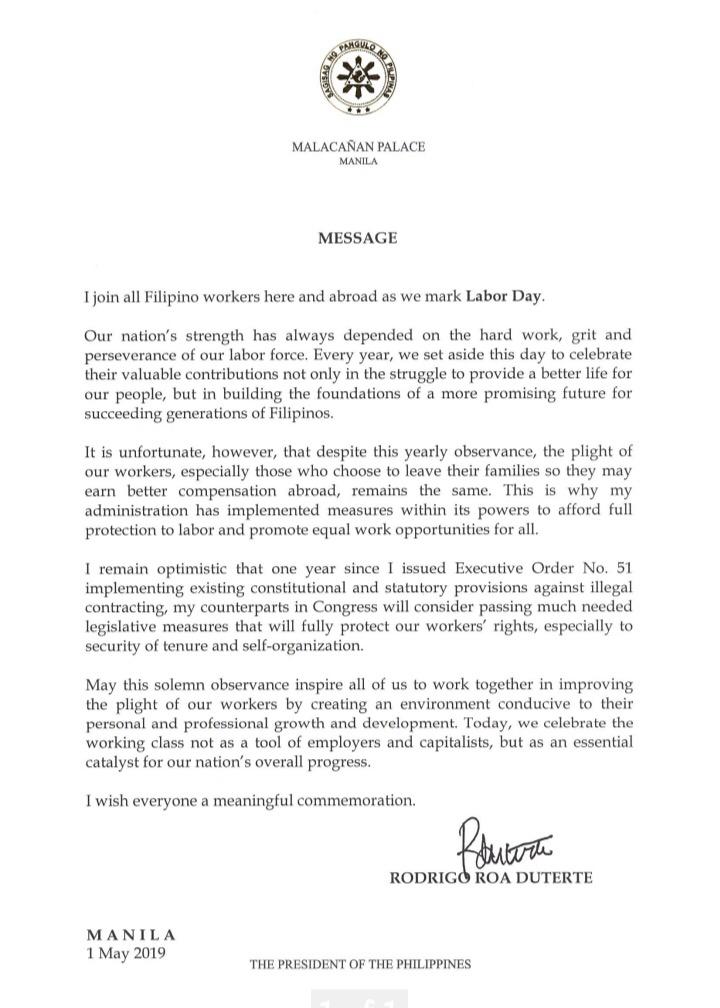 The President recognized the “plight of our workers,” whom he said have remained the same through the years.

“It is unfortunate, however, that despite this yearly observance, the plight of our workers, especially those who choose to leave their families so they may earn better compensation abroad, remains the same,” he said.

“This is why my administration has implemented measures within its powers to afford full protections to labor and promote equal work opportunities for all,” he added.

On May 1 2018, the President issued Executive Order (EO) No. 51 in the absence of a congressional measure that would put an end to contractualization.

Ending contractualization was one of the campaign promises of the President. His EO, however, has received criticisms from labor groups, describing it as “useless.”

“I remain optimistic that one year since I issues Executive Order No. 51 implementing existing constitutional and statutory provisions against illegal contracting, my counterparts in Congress will consider passing much needed legislative measures that will fully protect our workers’ rights, especially to security of tenure and self-organization,” he said.

He urged every Filipino “to work together in improving the plight of our workers by creating an environment conducive to their personal and professional growth and development.”  /muf