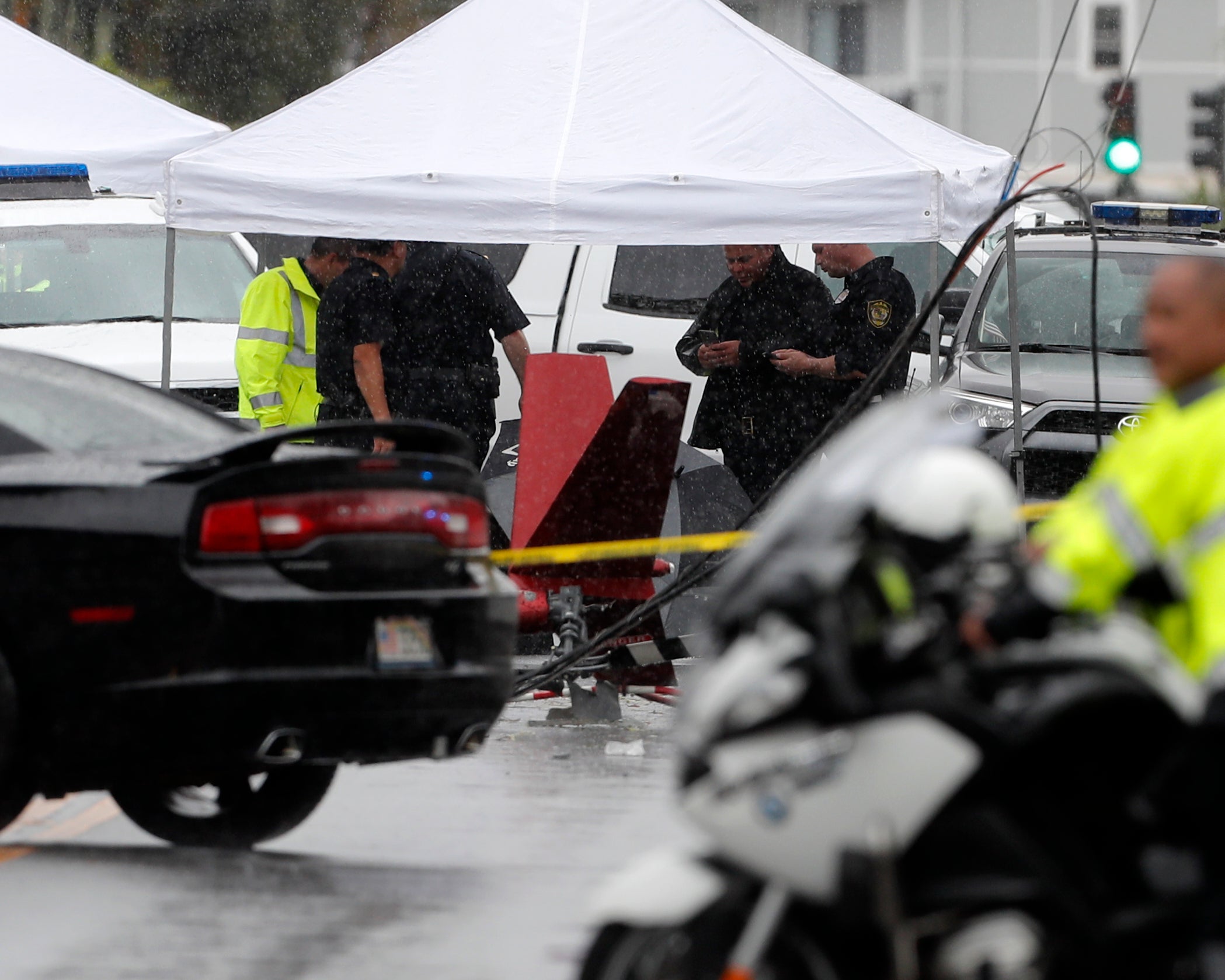 Investigators stand around the wreckage of a helicopter, Monday, April 29, 2019, in Kailua, Hawaii. Fire and helicopter parts rained from the sky Monday in a suburban Honolulu community in a crash that killed three people aboard, officials and witnesses said. (AP Photo/Marco Garcia)

HONOLULU  — Fire and helicopter parts rained from the sky Monday in a suburban Honolulu community as a tour helicopter crashed and killed all three people aboard, officials and witnesses said.

“All you could see was fire,” witness Melissa Solomon said, explaining that she was driving on the street when she looked up to see flames and a helicopter plummeting in front of her.

She said she had turn onto another street because she was afraid more pieces were going to fall from the sky onto her and her 16-year-old daughter sitting in the front passenger seat.

“We could have been smashed by it,” she said.

Paramedics responding to an unrelated call from a patient with leg pain about 30 yards (27 meters) away heard “a horrific bang,” said Shayne Enright, a spokeswoman for Honolulu Emergency Medical Services. When they turned around, they saw a helicopter on fire.

“When they got there, neighbors were doing a heroic job trying to put out the fire and also trying to get the patients away from the burning aircraft,” Enright said.

The crash occurred in Kailua, a town of 50,000 people about a 30-minute drive from downtown Honolulu.

The crash site was on a two-lane road amid one and two-story homes.

Darel Robinson was doing construction work at a house about a half-mile from the crash site when he heard what sounded like helicopter blades thumping and then a loud boom.

“It was going nose down and parts were starting to fly off,” he said.

Megan Lacy, of Alabama, was visiting friends when they heard the crash. They went outside, expecting to find two cars after they had hit each other.

“We were really confused,” she said. “And then we heard screaming and the word ‘fire,’ and I saw smoke,” she said. Debris damaged her rental car about 100 yards (90 meters) from the crash.

A resident said he heard the morning crash then saw a ball of fire in a road when he ran from his house.

Leleo Knappenberger told Hawaii News Now that his mother heard the helicopter flying over the house, making a strange noise.

He said he later saw what appeared to be the tail end of the helicopter.

“It’s all smashed to pieces,” he said.

He said the circumstances of the crash were unknown.

No further details were available on those killed.

The helicopter, which was built in 2000, is registered to United Helicopter Leasing LLC of Honolulu, according to FAA records. State business records show Nicole Vandelaar as the

A woman who answered the phone at the business and identified herself as Nicole declined to immediately comment, saying she was too busy to talk.

A website for the Honolulu tour helicopter company Novictor Helicopters identified Nicole Vandelaar as founder and CEO. The website said she is an expert pilot commercially licensed to fly helicopters and airplanes.

A Novictor helicopter crashed on a sandbar in Kaneohe in October after the pilot lost consciousness twice. That crash resulted in injuries to the pilot and two passengers. It was also a Robinson R44 aircraft.

Thielen also called for tour helicopter flights to be grounded until an investigation into the crash is completed.

Kailua is home to a Marine Corps base. In recent years it’s become a popular destination for tourists to go to the beach, hike and shop.

Former President Barack Obama stayed at a rented beachfront vacation home in the town during the winter holidays when he was in the White House.  /muf