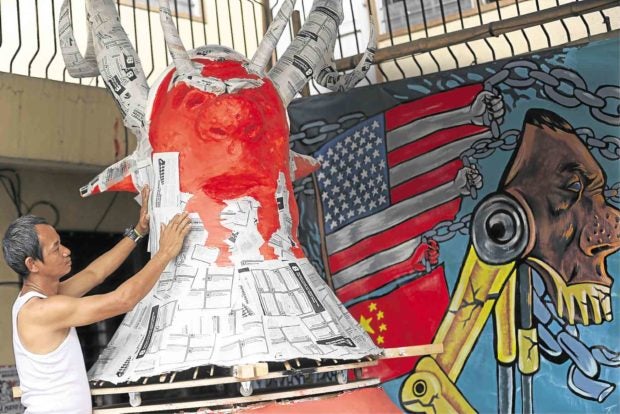 MANILA, Philippines — A militant labor group said on Monday it expected 100,000 workers to join nationwide rallies on May 1, Labor Day, in a stinging rebuke of President Duterte, whom it accused of accepting lopsided deals with Chinese businessmen at the expense of Filipino workers.

Organizers said they would demand a P750 national minimum wage and an end to contractualization, an issue of singular importance to labor groups that Mr. Duterte once vowed to end but had largely abandoned, deferring to Congress to act on it instead.

“I think it would be in the hands of a united labor [sector] to really struggle to win the battle against contractualization,” Kilusang Mayo Uno (KMU) chair Elmer Labog told the Inquirer. “We are no longer dependent on the promises of the President.”

Rallies will be held in Metro Manila, Bicol region and the cities of Cebu, Davao, Baguio and Bacolod, among other areas. In Metro Manila alone, some 30,000 would take to the streets, Labog said.

KMU dismissed allegations by the Philippine National Police that members of the New People’s Army would join the mobilizations, calling it a martial law-era tactic.

“They are trying to scare workers,” said Lito Ustarez, KMU vice chair. “It’s too laughable. It’s not going to happen.”

At a press briefing, labor leaders called attention to the stark split-screen that played out last week as Mr. Duterte attended the Belt and Road forum in Beijing, where he clinched major investment deals while Filipino workers languished amid low wages and rising prices.

“Being heavily dependent on foreign investment means that wages will not see significant increases, because investors look for the lowest possible source of wages,” Labog said.

The President was purposely blocking a wage increase to appease his “imperialist master,” the KMU leader said.

To dramatize their calls, labor leaders displayed a red-painted balikbayan box to reporters that, they said, represented Mr. Duterte’s “gift of cheap labor” to China.

“President Duterte has delivered his promise to China but he compromised our sovereignty,” Labog said. “We call on all Filipino workers to unite and march.”

Last week, three labor groups—Kilos na Manggagawa, Metal Workers Alliance of the Philippines and the BPO Industry Employees Network—sought an increase of P750 in the daily minimum wage in Metro Manila in a petition filed with the Regional Tripartite Wages and Productivity Board.

The wage increase, they said, would enable workers and their families to “survive” amid high prices of goods and services these days.

On Monday, the Trade Union Congress of the Philippines filed a similar petition seeking a P710 across-the-board daily wage increase.

Ustarez said the KMU welcomed the petitions but pointed out that the goal was to ultimately junk Republic Act No. 6727, the Wage Rationalization Act, which allows the minimum wage to differ per region.

The law, Labog said, paved the way for startlingly low minimum wages in the provinces.

The labor issues that promise to be a galvanizing force on May 1—low wages, contractualization and worsening attacks on workers—converged in the testimony of Maria Fe Juson, a factory worker at a packing plant in Compostela Valley province.

Juson told the Inquirer that she and other workers at Sumifru Corp. are exposed daily to chemicals, such as the pesticide Omega, which are used to prevent bananas from ripening too early.

Without any protective equipment or medical assistance from the company, she said, they faced the risks of rashes, dizziness and heart problems.

Juson said the workers were paid only P365 per day. Worst, she said, she had to watch her elderly coworkers leave the company without a single peso in retirement pay after decades of service because they were never regularized.

“Make good on your promise to end contractualization,” she said, addressing the President.

A bill calling for an end to “endo” may yet be approved when the Senate resumes its session after the midterm elections.

Endo (end of contract) is a scheme in which workers are hired for a fixed period so that companies could avoid making them regular employees.

The security of tenure bill would put an end to endo and put a stop to labor-only contracting.

Under labor-only contracting, the job contractor merely recruits or supplies workers to a contractee and does not have sufficient capital or investment, and the workers supplied perform activities directly related to the principal business of the employer.

Sen. Joel Villanueva, chair of the Senate labor committee, has high hopes that the security of tenure bill could still be approved on final reading and at the bicameral conference level when Congress’ sessions resume later this month.

The session will be only for three weeks before the 17th Congress finally adjourns.

The House of Representatives has approved the security of tenure bill on third reading. In the Senate, it is still undergoing interpellation in the plenary.

“We’re optimistic that the Senate will be able to send the security of tenure bill to the bicameral conference just before the 17th Congress adjourns,” Villanueva said.

He noted that the President had certified the measure as urgent.