KUALA LUMPUR, Malaysia – Malaysia’s former Prime Minister Najib Razak has failed in his bid to have seven corruption charges against him dismissed as his trial entered the third week Monday.

At the start of his trial April 3, Najib challenged the criminal breach of trust, abuse of power and money laundering charges against him on grounds they lacked clarity and impeded the preparation of his defense. 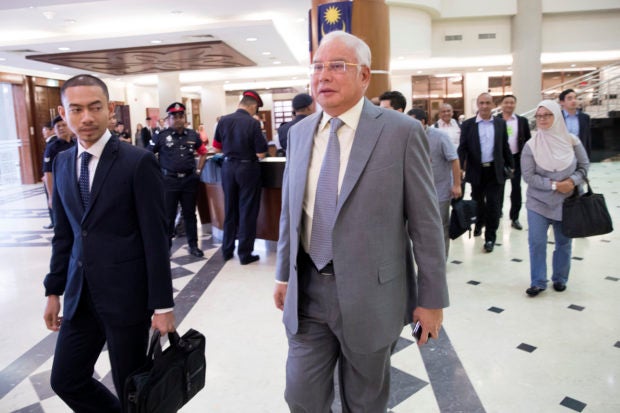 Former Malaysian Prime Minister Najib Razak, center, walks in a courtroom at Kuala Lumpur High Court in Kuala Lumpur, Malaysia, Monday, April 29, 2019. Najib, his former deputy and several high-ranking former officials have already been charged with corruption after the election ushered in the first change of power since Malaysia’s independence from Britain in 1957. (AP Photo/Vincent Thian)

Judge Mohamad Nazlan Mohamad Ghazali ruled Monday that Najib hadn’t been prejudiced as his lawyers had extensively cross-examined 21 witnesses who testified so far. The judge ruled the charges would stand.

The trial is the first of several against Najib, who faces 42 graft charges in one of the country’s biggest criminal proceedings.

The first seven charges specifically relate to the suspicious transfer of 42 million ringgit ($10.2 million) from SRC International into Najib’s bank accounts via intermediary companies between 2011 and 2015.

SRC is a former unit of the 1MDB state investment fund, which U.S. investigators say was pilfered of billions by Najib’s associates. The scandal helped lead to Najib’s electoral defeat last May.

Najib is accused of using his position to receive the money for approving a government guarantee for a government loan to SRC, committing criminal breach of trust and accepting proceeds from unlawful activities.

His lawyers say Najib is the victim of conspiracy by rogue bankers including one identified by U.S. investigators as the mastermind behind the 1MDB fiasco.

Prosecutors say Najib, who set up 1MDB in 2009, was the real power behind the fund and SRC.

Evidence so far has shown a complex trail of money in and out of Najib’s bank accounts, some of which had been used to pay for his home renovation, some disbursed to political parties in his then ruling coalition, some for charity and some  to manage his Chinese Facebook account and monitor six Chinese-language dailies.

His wife, Rosmah Mansor, also has been charged with money laundering and tax evasion linked to 1MDB.

She has also pleaded not guilty and her trial date has not been set. /gsg