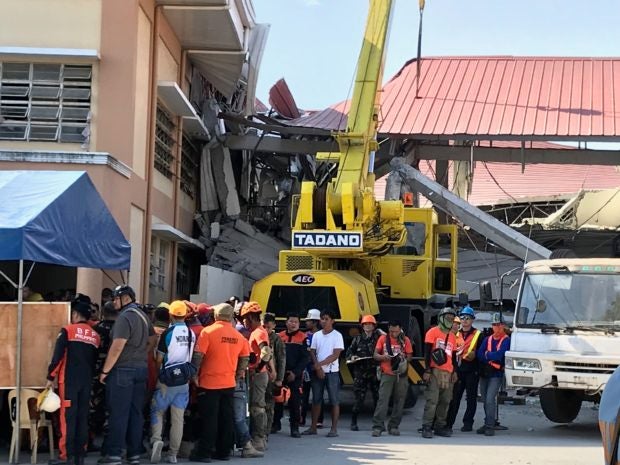 Chuzon Supermarket in Porac, Pampanga, was one of the structures damaged by a magnitude 6.1 quake that shook parts of Luzon on Monday, April 22, 2019. (Photo by FAYE ORELLANA / INQUIRER.net)

NDRRMC said a total of 334 structures and buildings sustained damage in the Ilocos Region, Central Luzon, Metro Manila, and Calabarzon.

More than half of this amount came from Central Luzon at P222.62 million. The estimate damage in other areas are as follows:

In Central Luzon, the total cost of damage to roads and bridges reached P200 million, bringing total damage to infrastructure to P505.92 million.

NDRRMC said a total of 868 aftershocks ranging from magnitude 1.4 to 4.5 have been reported since the earthquake struck on April 22.

Meanwhile, the earthquake caused the death of 18 people — all in Central Luzon — while 243 people sustained injuries. Five people are still missing.

Following the earthquake, several other earthquakes were also reported in several parts of the country, most notably the magnitude 6.5 earthquake that struck Eastern Samar the day after.

However, science research analyst Nolan Evangelista of the Philippine Institute of Volcanology and Seismology (Phivolcs) said the earthquakes were not related to each other.

“Earthquakes are normal because the Philippines is seismically active,” Evangelists told INQUIRER.net. “We are within the Ring of Fire, like Indonesia and Japan. Every now and then there are earthquake activities.”