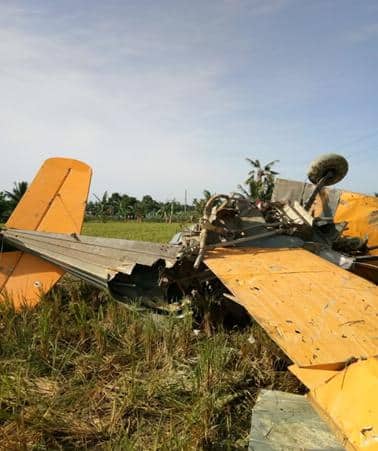 The wreckage of a light plane being used to spray pesticides over banana plantations after it crashed in a rice field in Carmen, Davao del Norte Saturday morning, killing its pilot. (Photo courtesy of Police Regional Office XI)

MANILA, Philippines — An agricultural pilot died Saturday morning when the aircraft he was flying got entangled in a high tension electrical wirings and crashed in Davao del Norte.

Initial investigation from the Civil Aviation Authority of the Philippines (CAAP) showed that the pilot hit a live wire while performing aerial spraying of a banana farm at 6:53 a.m.

Jessie Kevin Lagapa, 25, of Lapu-lapu City, Cebu, died of injuries after the light plane he was piloting plunged into a ricefield at Purok 1, Barangay Mangalcal, according to Police Major Jason Baria, spokesperson of the Southern Mindanao Police Regional Office.

Lagapa was pulled out of the wreckage by responding firefighters and rescuers and rushed him to the Carmen District Hospital but  he was declared dead on arrival by attending physicians.

The aviation authority also said that the pilot “must have been blinded by the glare of the rising sun” when he hit a high tension wire in the banana plantation located in Barangays Kasilak and Mangalcal in the towns of Carmen and Panabo, respectively.

Following the crash, the aircraft’s airframe, engine, and propeller were also reported damaged, CAAP said. It was operated by Davao Aerowurkz Corp.