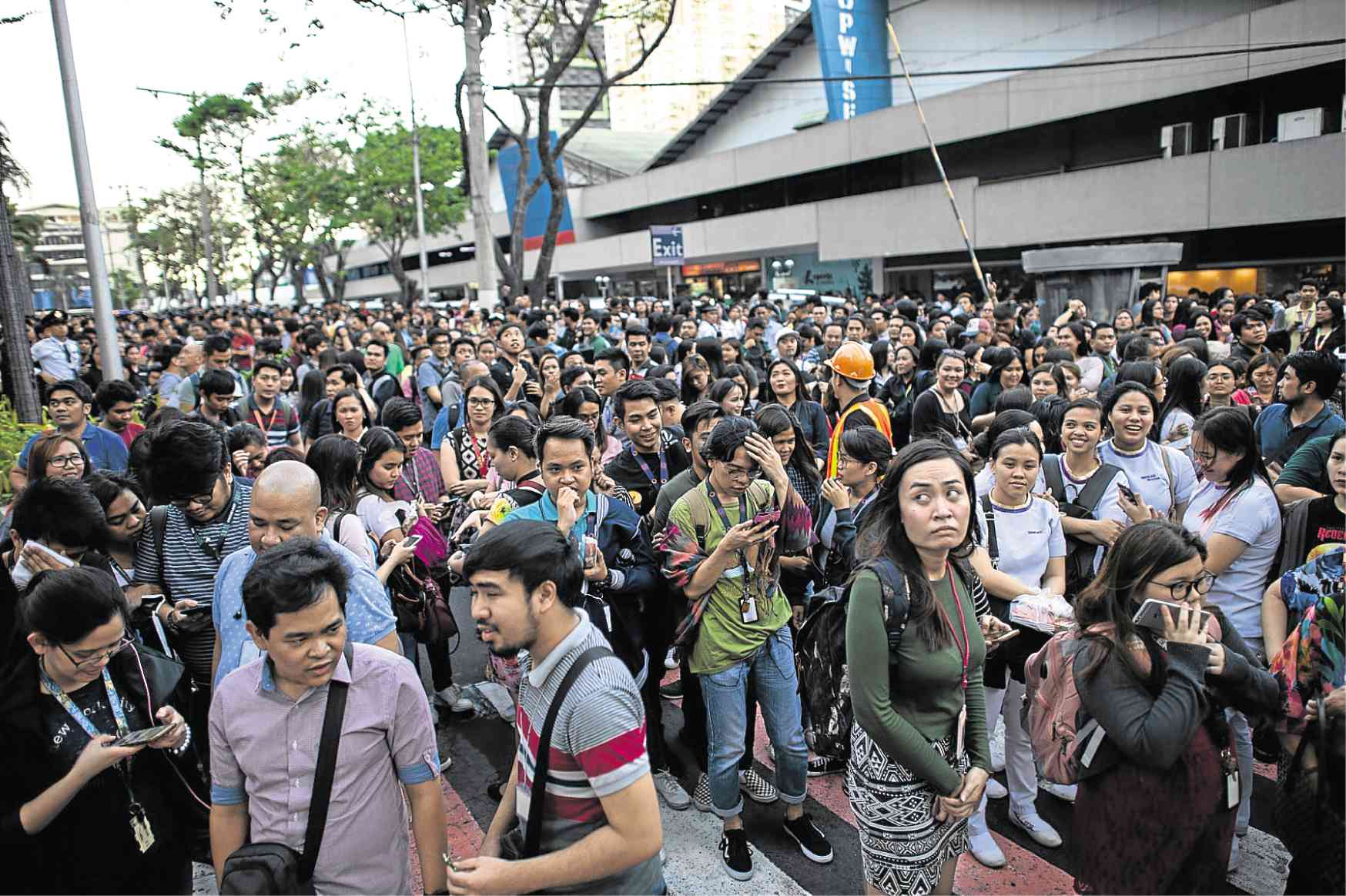 AFTER THE SHOCK Office workers gather at an open area in Manila after a strong earthquake on Monday shook buildings and sent them fleeing. —AFP

More earthquakes hit the country on Friday, adding to a week of tremors starting with a 6.1-magnitude temblor felt in Central Luzon and Metro Manila on Monday.

The latest was a 5.5-magnitude quake off the coast of Surigao del Norte at 1:26 p.m. on Friday, the Philippine Institute of Volcanology and Seismology (Phivolcs) said.

Felt as intensity 2 at Gingoog City in Misamis Oriental and intensity 1 in Surigao City, the quake’s epicenter was located 71 kilometers southeast of General Luna town.

Earlier, at 3 a.m. on Friday, a 4.4-magnitude earthquake shook San Nicolas town in Ilocos Norte. It was recorded as intensity 4 in San Nicolas and Sinait; intensity 3 in Sarrat, Pasuquin and Laoag City; and intensity 2 in Vigan City, Ilocos Sur.

At 10:44 a.m. on Friday, a 4-magnitude tremor struck northeast of Albuera, Leyte, which was felt as intensity 3 in Ormoc City.

A day after Monday’s Luzon quake, which had its epicenter in Castillejos town, Zambales, a 6.5-magnitude quake rocked Eastern Samar on Tuesday, while a 4.7-magnitude quake was recorded in Davao Oriental on Wednesday.

Most of the seismic activities, however, were aftershocks, with at least 30 recorded in the Surigao area, according to Phivolcs.

Dandy Camero, Phivolcs science research assistant, said the quakes were caused by the movement of the Surigao segment of the Philippine trench, although these were not powerful enough to create a tsunami.

Stretching around 1,320 km, this submarine trench borders the eastern side of Mindanao.

Damage from the Luzon quake has been placed at more than P288 million, according to the Pampanga Provincial Disaster Risk Reduction and Management Office, which put at P121.7 million the damage to the Consuelo, Caulaman, San Pedro, Sto. Rosario and Apalit bridges in Floridablanca town, and the Palawe Bridge in Bacolor town.

The total cost of damage to the flood control dikes in Pandagurig, Dampe and Sapang Maragul in Guagua, which suffered cracks, and the partially collapsed ceiling of Romana Pangan District Hospital in Floridablanca was estimated at P74.5 million, while damage to at least 90 classrooms in 11 schools in Porac and Floridablanca was placed at  P92.5 million.

In Guagua, more than 40 families living behind the Chuzon Supermarket branch at Purok 5 in Barangay Sto. Cristo have asked to be compensated after Mayor Dante Torres had ordered the business closed in compliance with President Duterte’s order following the collapse of the supermarket’s Porac branch.

A resident said that even before Monday’s quake, the ground in the area had sunk, resulting in the collapse of concrete fences and the appearance of cracks on floor tiles.

The agency said 18 people died, 282 were injured and seven missing after Monday’s quake.

The agency has also documented a total of 1,230 damaged houses and 156 destroyed in Bataan and Pampanga; 138 damaged structures in the rest of Central Luzon and in Metro Manila; and an estimated P505 million worth of damage to schools and roads in the Ilocos region, Central Luzon,  Calabarzon and Metro Manila.

The government has released P1.1 million worth of assistance to the quake-affected areas. —WITH REPORTS FROM TONETTE OREJAS AND  JAYMEE T. GAMIL