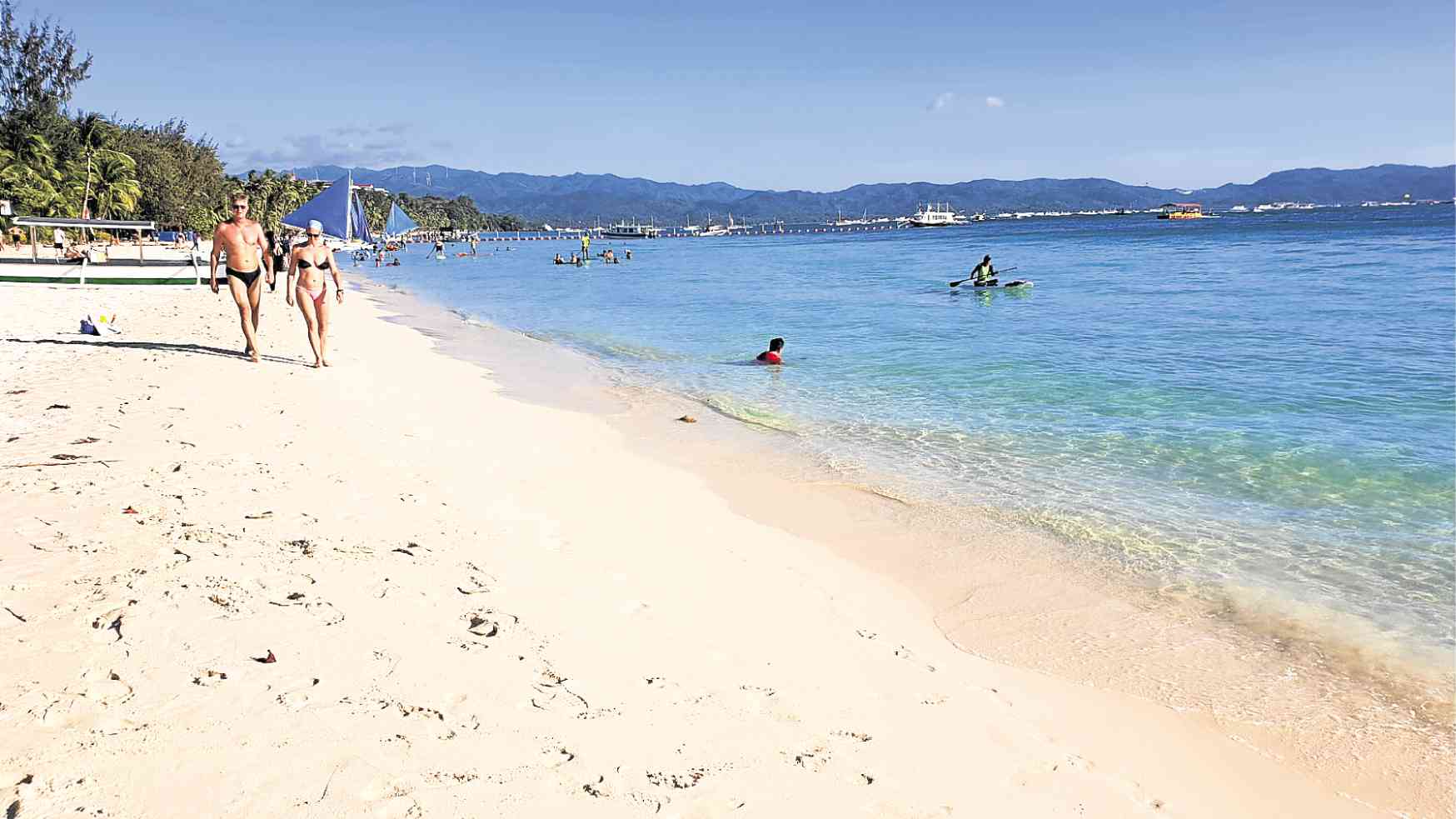 BORACAY ISLAND, AKLAN—These days, visitors to White Beach need only a quick glance at the shoreline to conclude that the water quality in the country’s premier tourist destination has improved, according to Environment Secretary Roy Cimatu.

Speaking on the eve of the first anniversary of the six-month closure of Boracay to tourists, Cimatu said the absence of clumps of green algae along the main beach was an indication that the water had become clean and safe for swimming after government efforts to stop the discharge of untreated wastewater into the sea.

Unlike in the past, the highest level of coliform bacteria in recent months has been 40 MPN (most probable number) per 100 milliliters, Cimatu said at  a press conference after a meeting of the Boracay Inter-Agency Task Force (BIATF) on Thursday. “And in some months, it was single digit,” he added.

The acceptable concentration of coliform bacteria is 100 MPN/100 ml for areas categorized for swimming.

Cimatu said the Department of Environment and Natural Resources (DENR) had compared photographs of the main beach taken last year with the situation on Thursday to show the marked difference in the water quality.

In February 2018, President Duterte said Boracay had turned into a “cesspool” due to uncontrolled development, business owners’ violation of environmental laws and congestion. Two months later, on April 26, the island was closed to tourists to allow for a six-month period of rehabilitation.

Summer is when algal blooms are expected in Boracay.

There is still algal bloom in a small area at the northern end of the island, but it is not as thick and viscous as in previous years, a number of residents told the Inquirer.

Many business owners and residents have claimed that algal blooms are seasonal, “natural” and have been occurring even before the island was developed.

But in 2015, then Environment Secretary Ramon Paje noted that algal bloom on Boracay’s shores indicated water pollution resulting from “poor waste management, with sewage being dumped into the waters.”

In a statement issued on that year, the DENR cited a study by conservation group Global Coral Reef Alliance that “the presence of green algae along Boracay’s shoreline during the calm season is a strong indicator of very high nutrient pollution that they are typically found right around sewage outfalls.”

It said the algae “die back in the rough season because waves dilute nutrients to lower levels and wash away the algae, … [but] the algae become visible again in the next calm season.”

The government’s rehabilitation efforts also involved the removal of structures encroaching on the 30-meter beach easement.

Cimatu said traffic congestion had been addressed. He said the average time for tourists to travel from Cagban port to their hotels now took only 30 minutes, compared to at least an hour in the past.

He also cited the rebuilt sidewalks, and said the BIATF would continue to improve the water quality of Bulabog Beach at Boracay’s eastern side.

The task force  yesterday kicked off its “#LOVEBoracay,” a weeklong series of activities promoting sustainable tourism to mark the first anniversary of the closure and rehabilitation. Among the highlights are a food festival, a drone film festival and a sailboat-painting contest.

The Department of Tourism said the activities were an alternative to the “LaBoracay” revelry held during long vacation weekends on the main beach, especially on Labor Day. The revelry drew thousands of tourists and merrymakers, but were largely criticized for causing congestion and garbage buildup on the island.

Tourism Undersecretary Arturo Boncato Jr. said that no big party or event was planned on White Beach this year, and that activities were confined to select establishments.