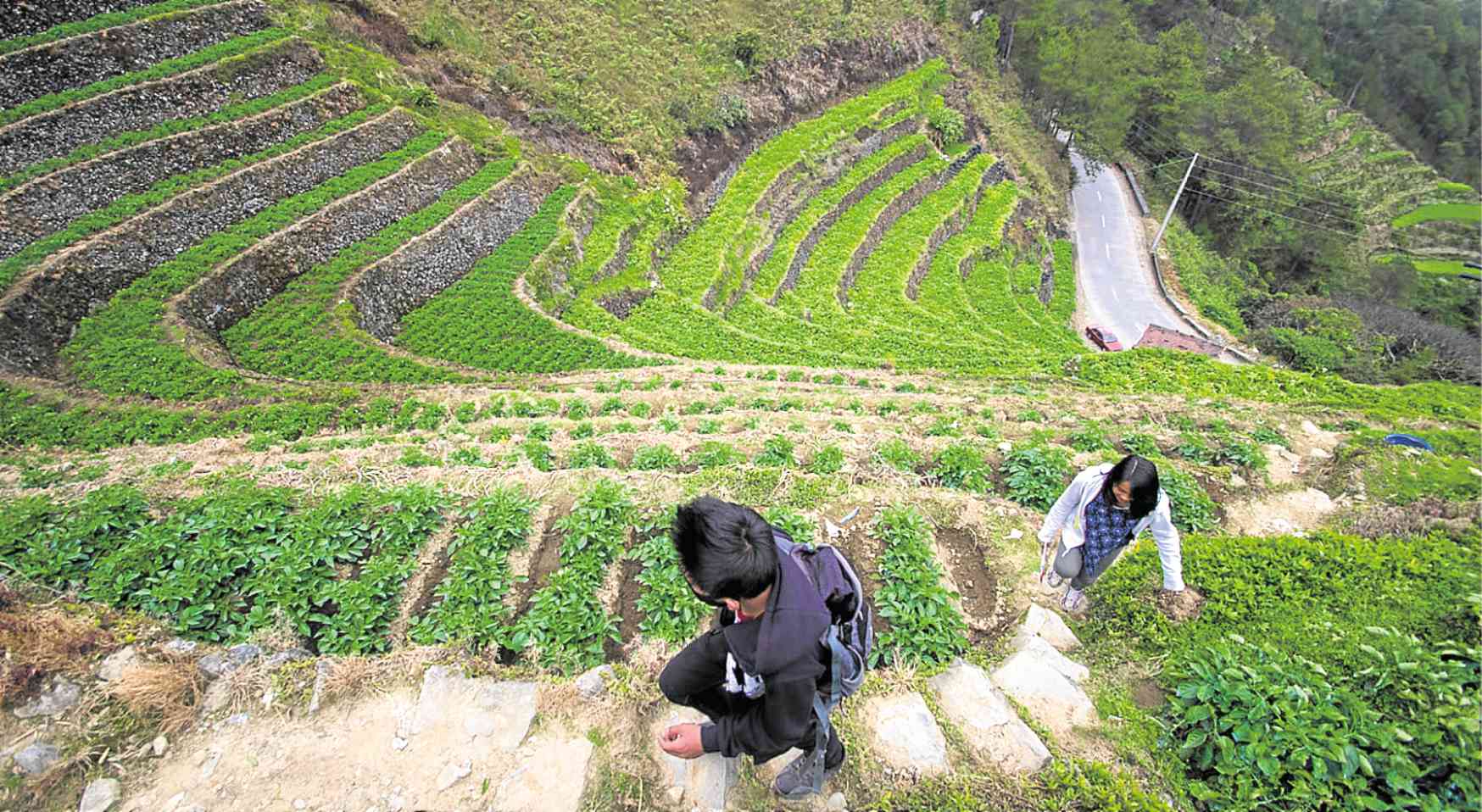 VEGGIE FARMS The mountainsides of Benguet province are carved to give way to vegetable farms. Growth in the Cordillera’s agriculture sector, however, slowed down in 2018 due to typhoons that hit the region. —RICHARD BALONGLONG

BAGUIO CITY—The Department of Agriculture (DA) has started asking people what they prefer to eat, side by side with an agency study on climate and soil conditions of every patch of land where farmers grow food.

The profiles of farms and what people tend to consume will help food producers cope with the unpredictable weather, which has been blamed for Cordillera agriculture’s poor performance in 2018.

Cordillera’s gross regional domestic product, an annual measure of goods and services produced by a region, posted 7.3 percent in 2018 from a 12.2-percent growth in 2017. Farming and mining were among the sectors that performed badly.

Economists were surprised when the Cordillera food economy grew by 5.1 percent in 2017 after years of economic contraction.

But Typhoons “Ompong” and “Rosita” in 2018 cost the region P18 billion in damaged and lost crops, bringing the sector’s growth down to a negative 5.3 percent, said Susan Balanza, DA Cordillera planning officer.

The farming sector had always been vulnerable to climate change, Balanza said. But she said her agency had been gathering information for a national color-coded food map, which would indicate the weather patterns, terrain and soil quality of land used to grow food.

The map would help local government policymakers and farming communities plan for more weather changes, which have been projected through climate models by the government weather bureau.

The map will also suggest what crops are more suited for their respective areas, Balanza said.

The DA also began a survey to determine the dietary preferences in towns and provinces to help farmers decide what crops were marketable, she said.

Benguet farms carved out from the mountainsides have been major sources of salad vegetables like carrots, lettuce, cabbages, potatoes and cauliflower for Metro Manila and other Luzon markets.

Highly priced heirloom rice are also grown on the rice terraces of Ifugao and Mountain Province, and in vast palay farms of Kalinga province.

Mining and quarrying recorded a negative 15-percent growth in 2018, from a negative 0.2 percent in 2017, slowing down the overall performance of the Cordillera industry sector, which grew by 9.2 percent last year from an 18.8-percent growth rate in 2017, according to the Philippine Statistics Authority.

It was not clear how the poor growth in quarrying affected a massive construction boom, dominated by private sector investments in 2017, which drew a 23.3-percent growth rate for the construction sector.

Quarrying’s poor showing may be due to inadequate information because local governments have not provided data about licensed quarry operators and quarry revenues, said Alfredo Genetiano, Cordillera mine management division chief of the Mines and Geosciences Bureau.

The Department of Public Works and Highways (DPWH) intends to pave 191 kilometers of roads in Cordillera, “to finally complete the concreting of all 2,258 km by the end of this year,” Angelita Mabitasan, DPWH Cordillera planning chief, said. —VINCENT CABREZA