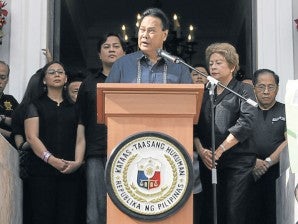 FIGHTING BACK Impeached Chief Justice Renato Corona, with his wife and children behind him, comes out with all guns blazing against President Aquino during Wednesday’s rally in front of the Supreme Court building in Padre Faura, Manila. NIÑO JESUS ORBETA

Supreme Court Chief Justice Renato Corona on Wednesday came out swinging at President Benigno Aquino III and Malacañang’s allies in the House of Representatives, claiming his impeachment was part of a plot to make the Supreme Court subservient to the whims of the administration.

Speaking entirely in Filipino before a crowd of at least 3,000 court personnel who gathered at the tribunal’s compound in Manila, Corona was combative in rejecting calls for him to step down and assailed Mr. Aquino for his supposed “greediness” to designate “his own” chief justice.

“I have not wronged you, Mr. President. I don’t have any sins against the people,” Corona said. “I oppose this relentless persecution, intimidation and bullying. I oppose this dictatorship that President Benigno Simeon Aquino III is slowly establishing.”

Corona’s 35-minute speech was marked by applause 56 times. His wife Cristina and their two children stood by him, as did the Supreme Court spokesperson and administrator, Jose Midas Marquez, and other justices.

Dressed in a dark blue barong, Corona vowed to lead the fight to protect the independence of the judiciary.

“Mr. President, I am the primus inter pares (first among equals) in the Supreme Court. If you don’t understand this, it means that I should be at the forefront in the fight to defend the Supreme Court,” he said, drawing loud cheers from his supporters clad in black shirts. “We will not allow them to disrespect and trample on our democracy and the Supreme Court.”

Corona declined reporters’ requests for an interview after his speech, but said he was surprised at the outpouring of support from court employees.

“I did not expect this number of court employees to be here. This is also replicated in other parts of the country,” he said before being led by security personnel back to his office.

Briefly speaking with reporters, Cristina Corona said she would fully support her husband in the impeachment trial.

“We just pray. We believe he will be cleared because he has not done anything wrong. We stand together behind him,” she said.

In his speech, Corona questioned the haste with which the House and members of Mr. Aquino’s Liberal Party approved the articles of impeachment against him on Monday.

He surmised that the 188 congressmen who signed the impeachment documents had not read the contents of the 68-page complaint.

“While I respect the constitutional process in filing a complaint against members of the Supreme Court, I cannot allow the abuse of power and processes in an attempt to designate their own magistrates in the Supreme Court,” he said.

Corona said his impeachment was linked to the Aquino administration’s eagerness to control the high court by installing justices “who will grant their every request.”

“It seems that they’ve become restless because they cannot designate their own chief justice if they will follow the Constitution. That’s why they labeled me as a stumbling block to economic development and to the realization of their campaign promise,” he said.

The Chief Justice said the allegations against him were malicious and mere fabrications.

Corona said the eight articles of impeachment against him could be summed up into complaints regarding his “personal acts” and accusations concerning “official actions of the Supreme Court.”

“This allegation is a complete lie. They are resurrecting this to provoke the people and destroy the people’s trust in the Supreme Court and the judiciary,” he said.

Corona also lashed out at the President for insisting that he was a “midnight appointee” of then outgoing President Gloria Macapagal-Arroyo.

“He said I should not have accepted my appointment. Why, Mr. Aquino? So you could name your chief justice who would be under your control?” Corona said.

According to Corona, his appointment went through the legal procedure stipulated in the Constitution, including the selection process conducted by the Judicial and Bar Council then headed by outgoing Chief Justice Reynato Puno.

“The Supreme Court has decided on this issue. This had long been settled. If they had questions with the [its] ruling, then they should have filed an opposition then,” he said, adding:

“As they say,  ‘A lie becomes the truth if told often enough.’ But how could accepting this great honor become a sin? These accusations were just meant to destroy my integrity and the Supreme Court’s honor and reputation.

“These allegations are all fabricated. This is blackmail.”

The Chief Justice also said the inclusion of his wife in the impeachment complaint was “the height of disrespect” to his person.

“Maybe they thought that by doing this, they could easily make me surrender. But I’m lucky to have a kind and strong partner, my source of strength and inspiration,” he said before turning to his wife and professing his love for her.

The couple then embraced, eliciting applause and catcalls.

Corona pointed out that his wife was appointed to the board of Camp John Hay Corp. even before Arroyo appointed him Chief Justice.

He said he was ready to face the impeachment trial in the Senate, saying he could sleep well at night “knowing that my conscience is clean because I’m only doing my job.”

“I remain truthful to God, myself, to the law and to the people,” he said.

Corona dismissed Malacañang’s statements that his impeachment concerned only himself and was not an affront to the Supreme Court as an institution.

“This is a big lie. There’s no truth that they were only after Renato Corona. Their real motive is to destroy the judiciary, undermine democracy and enforce the rules of the  ‘king,’” he said.

“This is what the crooked straight path is leading to,” he said, alluding to the President’s rallying cry to tread the daang matuwid (straight and narrow path).

Corona said he had patiently tried to work with the President but that he could not understand why the latter was furious at him.

“Whenever we met, I tried to let him know that we should coordinate with and help each other for the country. We’re facing so many problems—the economic slowdown, unemployment, poverty and hunger. But it seems he cannot understand this,” Corona said. With Tetch Torres and Katherine Evangelista, INQUIRER.net