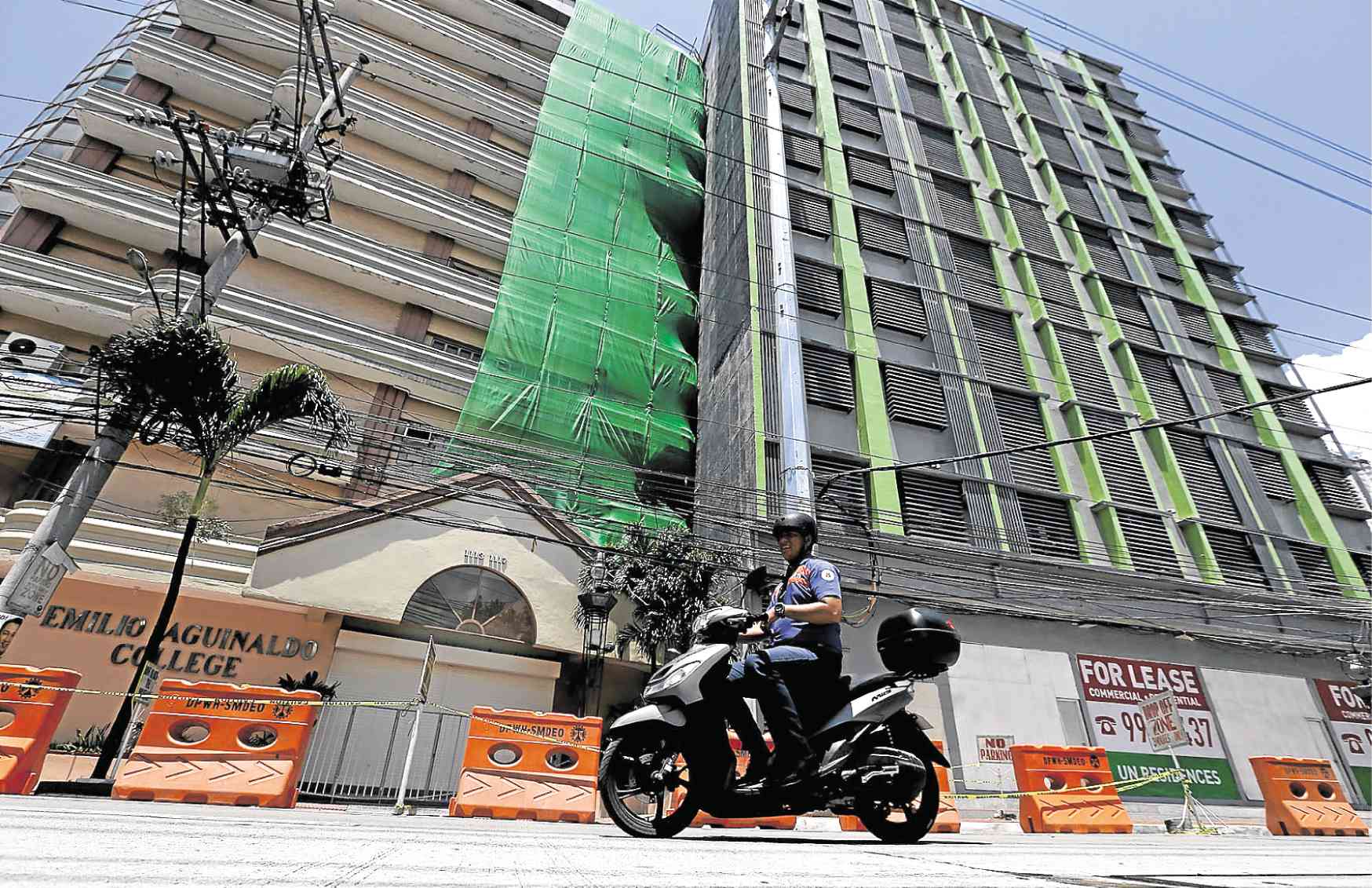 KEEP AWAY Barriers have been installed in front of Emilio Aguinaldo College in Manila to prevent accidents. —Richard A. Reyes

Minor damage have been found in 53 school buildings and three bridges in Metro Manila following the 6.1-intensity earthquake that struck parts of Luzon on Monday.

But three of the school buildings have been ordered closed for immediate structural evaluation, according to the report of the Department of Public Works and Highways-National Capital Region (DPWH-NCR) office.

Based on the ongoing inspections conducted in the metropolis by DPWH Quick Response Teams since the April 22 temblor, three of the 275 bridges checked so far sustained minor damage. These were Guadalupe Bridge in Makati City (crack on girder) and Tinejeros and Tanza bridges in Malabon City (minor cracks on railings).

The DPWH said the Guadalupe Bridge was already up for major retrofitting under its Unified Project Management Office while Tanza Bridge would undergo another inspection.

No repairs, for now

The minor damage on Tinejeros Bridge, on the other hand, does not require immediate repair as railings do not carry load, it added.

“These [structures] need a more detailed evaluation. Based on the rapid assessment we’ve conducted, multiple cracks were seen on the three school buildings. It’s a good thing that there are no classes anymore; these structures are already off-limits to students so further evaluation or corrective measure can be done,” Ador Canlas, DPWH-NCR director, told reporters.

According to Public Works Secretary Mark Villar, his department is coordinating with the Department of Education for the restoration of structures that sustained major damage.

“We are working closely with other national government agencies and stakeholders to ensure that our disaster preparedness, response and rehabilitation programs are efficient,” he said in a statement.

The DPWH has been conducting inspections of bridges, flyovers, viaducts, school buildings and 142 other public buildings in Metro Manila since the April 22 temblor.

In Manila, a portion of San Marcelino Street in front of Emilio Aguinaldo College has been cordoned off to prevent any accident.

Occupants of the 10-story building were evacuated after the structure leaned on the dormitory beside it after the quake.

According to Villar, all national roads and bridges affected by the temblor are now accessible to the public.

“The DPWH Quick Response Teams were able to assess, fix, and open various roads, bridges and other infrastructure that were damaged by the recent earthquakes in Luzon, Visayas and Mindanao,” he said.

He noted that immediately after the tremors, DPWH Quick Response Teams were deployed to conduct structural assessment and ensure the safety of national roads and public buildings in Regions 3 and 4-A, National Capital Region, Eastern Visayas, Surigao del Norte, Davao Occidental and Davao Oriental.

“As early as Wednesday afternoon, we were able to repair and open Consuelo Bridge in Floridablanca, Pampanga to light vehicles. Assessment of other infrastructure are also being conducted in Central Luzon,” Villar said.