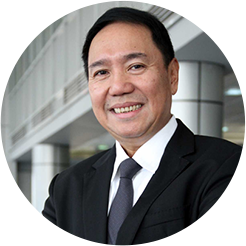 Laus, the chairman and founder of the LausGroup of Companies, was among the three fatalities reported when a private helicopter crashed into a fishpond in Barangay Anilao, Malolos, Bulacan.

Angara tweeted his condolences to the family and associates of Laus.

RIP Levy Laus. Condolences to his family friends and associates 🙏🏽

Meanwhile, Ejercito remembered Laus, who he calls as his “brother” at the Junior Chamber International of the Philippines, saying: “A very good and simple man in spite his many successes.”

Sad news, a JCI brother, Levy Laus, of the Laus Group of Companies, died in a chopper crash this afternoon.

A very good and simple man inspite his many successes.

May he rest in peace.

The late 68-year-old business magnate’s LausGroup of Companies is a diversified conglomerate of the automotive dealership and is considered the largest multi-brand network in the country today,  the company’s website says.

Aside from Laus, the crash killed the pilot, who was yet to be identified by authorities.